The Ingratitude of the 9 Lepers, an Enduring Passion

Jesus was going towards Jerusalem when, outside a small town, he encountered a group of ten lepers who entreated him loudly: ‘Jesus, Master, have mercy on us’ (Luke 17, 13).

Leprosy was a terrible disease which in ancient times was devastating for those who contracted it and, in the end, proved fatal. If anyone showed the first signs of leprosy, they were seized and sent into exile, away from society, to prevent the spread of the disease. Thank God, we now have medicines to treat this terrible disease, and the relatively few new cases, mostly in the developing world, can be treated effectively. 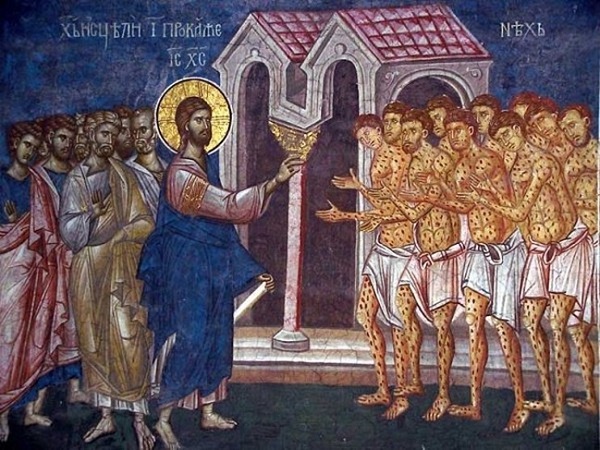 At the time of Christ, however, leprosy was very widespread. It presented an immediate danger to everyone and caused panic and anti-social patterns of behavior. It was thought to be transmissible and deadly, rather like the plague and tuberculosis in later times. Lepers were kept in isolation and held in contempt, because it was believed that the disease was the result of the sinfulness of those suffering from it. In other words, it was thought that, through the disease, God was punishing them for their sins. Leprosy thus acquired religious dimensions, apart from the corporeal and social ones.

We learn about the tragic state of these lepers from the narratives in the New Testament  concerning them. Displaced into desert regions, far from their families and all human contact and comfort, they would usually look for food in garbage tips and cemeteries.

The case of the cure of the ten lepers is a good example of a feature related to the virtue of gratitude. Although nine were healed, only the tenth man returned to give thanks before returning to normal society and his religious community. When he saw that he’d been cured, the latter, a Samaritan, turned back, thanking God in a loud voice. He fell at Jesus’ feet and thanked him. Again he spoke to God in a loud voice, but this time he wasn’t standing at a great distance from him. This time he wasn’t asking for mercy but was giving heartfelt thanks and showing veneration for his Redeemer. When he’d rendered thanks, he received from Christ the blessing of salvation: ‘Your faith has saved you’ (Luke 17, 19)*.

It’s no coincidence that the holy author of the extract commented on this egocentric and ungrateful behavior of the nine. As soon as their problem was fixed, they completely forgot the kindness that had been done to them. Only one, from a different country and a different religion, behaved humanely, simply and very naturally, expressing his gratitude. So, there aren’t many grateful people. This is a cause for self-examination and also a recognition that religiosity doesn’t always involve a proper attitude to life.

It’s a grave error, and is ingratitude, on our part to forget God’s bounty towards us and to remember him only when things become difficult.

The last words Christ directs to the leper were: ‘Get up and go on your way; your faith has saved you’. Henceforth he would not be in a state of sin, mortality and death. He’d be a person capable of resurrection, he’ll have enjoyed all the privileges guaranteed by life in Christ and by faith. He would be able to praise Christ and be inspired by him.

Let us, then, be thankful for everything, for whatever befalls us, because that’s real gratitude. If we’re thankful when everything’s going well, that’s nothing to preen ourselves over, because our nature itself urges us to be so. According to Saint John Chrysostom, if we give thanks when we’re beset by tribulations, however, that’s admirable.

* In the Greek.  Most English versions, however, (Young’s Literal Translation is an exception) say ‘has made you well/whole’. This is because they were translated largely from the Latin (Vulgate) translation, in which, instead of using the verb ‘to save’, the translators chose ‘to make “salvum”’. The trouble is that ‘salvus’ means both ‘saved’ and ‘well’, and, from the point of view of strict accuracy, the English translators chose the wrong option.