The Holy Fathers of the Church have commanded us to sing and read today about the case and parable of the Publican and the Pharisee, in order that we might prepare for the spiritual struggles and warfare of Holy Lent, which is approaching. This is why they called this week a ‘warning order’, because it forewarns and reminds us of the time of fasting and repentance which is almost upon us, so that we may prepare accordingly, to fight bravely and fairly, and not be defeated by any passion and lose the kingdom of heaven. Let each of us then examine which sin defeats us, so that we conquer it boldly in these holy days; so that we may shame the wicked devil, who fights day and night to defeat us, because he hates the human race. 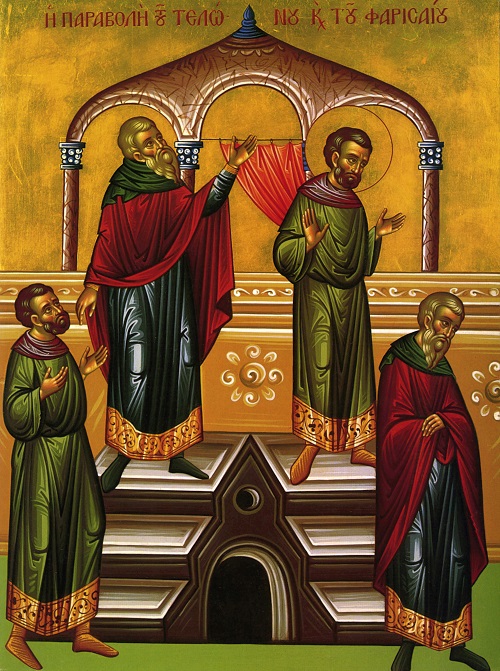 When a general attacks a city which is powerful and undefeated, he hurls all his strength at the weakest point of the defences, where the battlements are at their lowest, and applies the greatest pressure there. Likewise, the wicked devil attacks most fiercely against the sin which he finds each of us to be most susceptible to. He tempts the pleasure-seekers with fornication and gluttony; the irascible and irritable with hatred and envy; the callous with avarice; and so on. Now if he finds that we’re attentive to the commandments of God, that we’re virtuous and he can’t overcome us in any way, he cunningly contrives to bring us low through pride and arrogance which are more disgusting than any other transgression, which eradicate all good works and virtues and cast them to the wind. Humility, on the other hand, together with a change of heart, is the easier path to salvation and forgiveness. No matter how badly you’ve sinned, if you humble yourself and weep before God with all your heart, you’ll find forgiveness. On the other hand, the thrice-cursed people who keep all the commandments and achieve the utmost in terms of virtues but then fall into vanity have thrown away all their labours.

This is why our Lord, Jesus Christ, the incarnation of God’s wisdom and power, Who examines the hearts of each of us and provides for our salvation, as a careful and wise doctor spoke to us in parables, one of which is the inspired and wonderful one of the humble Publican and the conceited Pharisee. Through this, He castigates those who think highly of their good works and who, in the belief that they’re righteous, look down on sinners. Through this example, our wise Lord humbles the arrogance of those who are conceited and teaches us how to offer our prayer and supplication to God, that is with tears and humility, not with bombast and boasting. In this way we’ll avoid greater chastisement from our tolerant and patient Lord. There’s no wrongdoing more profound or harmful than pride and arrogance, which brought about the fall from heaven of the first among the angels, Lucifer [‘Bearer of Light], and made him Tenebrafer [the Bearer of Darkness], the devil. It was pride which exiled our first ancestor, Adam, from Paradise; which has worked so many other wicked and terrible things, and which is the root of all evil and the impediment to all spiritual progress and virtuous action.

This is why so many people have been lost through it, because they’ve rightly been deprived of God’s Grace, and have fallen into passions of licence and other similarly mortal transgressions…. Even if proud people fast, give alms in abundance, live prudently and pray, they’re labouring in vain and inopportunely, they’re suffering for no good reason and they’re objects of ridicule. Those who have pride in their heart are hated by the Lord and are unclean before Him. So many cities, homes, and innumerable people have been lost to pride and arrogance and have vanished in the end. Many famous hermits and anchorites, too, who renounced the world, scorned the pleasures of the flesh, riches, glory, and hated all other enjoyments then fell into pride, because they didn’t know how to humble themselves. They then suffered along with the sinners. They’ve thus been deprived of divine bliss and have (alas!) wasted all the labours of their asceticism through their proud thoughts. And as wicked as vanity and pride are, so a change of heart and humility are beneficial. Just as vanity and pride, scatter abroad, so humility easily gathers together. Pride casts us down into the depths of hell; humility raises us to the heights of heaven and makes us equal to the angels.