For three years in succession, Jesus Christ taught and performed miracles among the Israelite people. He wrought great signs and wonders and, at the same time, revealed important teachings. A theologian has made the observation that, every year, among the miracles and teaching, one sign stands out. For example, in the first year, there’s the miracle of the man who’d been paralyzed for 38 whole years. In the second, there’s the miracle of the man who’d been blind from birth. And in the third, a mere few days before his passion, the raising of Lazarus. Because of the last wonder, we see a lot of people accepting Jesus at his entry into Jerusalem: ‘they had heard that he had performed this sign, went out to meet him’. 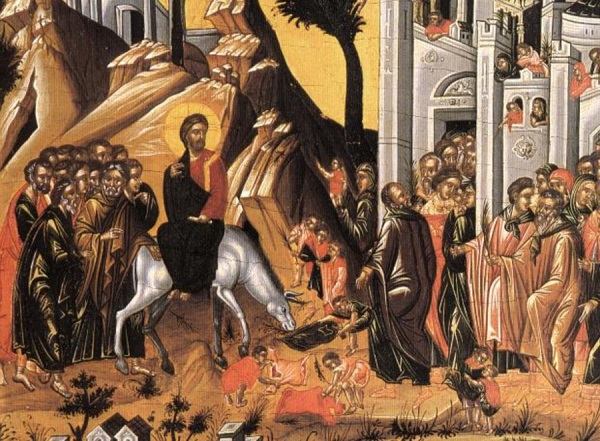 How did he enter Jerusalem?

The holy Evangelists mention that he rode on a humble animal, a donkey. He sat on a donkey in order to dispel the notion of a messiah of fantasy. His disciples and other people had formed an idea of him which was different from reality. When they saw the supernatural miracles he performed, they believed they’d found the right person to wage war against the Romans and to restore the kingdom of Israel to its former glory. Their expectations were that Christ  was the person who would redeem Israel (Luke 24, 21). On certain occasions they wanted formally to proclaim him king (John 6, 15). Christ took a very strict stand against this. People wanted material bread, but Christ talked about nourishment that endures (ibid. v. 27). They wanted Christ to be magnificent, powerful and invincible, whereas, at his entry into Jerusalem, the Lord appeared humble, meek and peaceful. Instead of a military leader they saw someone moderate. According to Saint Cyril of Alexandria, Christ showed ‘extreme moderation’, teaching people not to be proud of praise and not to seek more of anything than they required.

It’s true that not everyone reacted in the same way. ‘A large crowd’ (Matth. 21, 8), ‘many people’ (Mark 11, 8) and ‘the whole crowd of disciples’ (Luke 19, 37) took palms branches and laid clothes on the road for him to pass over, shouting out to him: ‘Blessed is he that comes in the name of the Lord’. Saint Gregory Palamas considers that a mighty wonder, because the crowd, the uneducated, the children and the infants all recognized Christ as God. They sang his praises in the same way as do the angels. The reaction of the Pharisees was different, however. Some protested and demanded that his disciples stop this praise (Luke 19, 39). And there were others who were greatly displeased with the proceedings (John 12, 19). The ordinary people grasped the significance but the leaders became angry and truculent.

The Church is Christ. In no circumstances should the Church or ecclesiastical leaders be invested with secular authority, that is, become secularized. It may be that the Church is active in the world, but not in a secular manner. Even works of charity have Christ as their starting-point rather than humanistic and secular bases. Our Church isn’t decked out in purple and crimson but with Christ’s humility. We don’t claim thrones and high offices, but living contact with Christ. The Church follows the path of Christ’s suffering and always looks to his person, so as not to become lost in the world. In the Church there’s no combination of secular power and ecclesiastical service. Its aim is to bring together God’s scattered children within his fold, and to point the way to our salvation. Therefore blessed is he who has come and opened such prospects of salvation for us.