The times in which we live aren’t normal. It’s an era of great changes and realignments. We’re living in a world which is in a state of flux. Ideologies and religions are amalgamating and there’s certainly an overall atmosphere of confusion and questioning. So it would not be strange or unexpected if we were to raise the question: ‘Why should I want to become an Orthodox Christian?’.

This question has to do with the heterodox or those of other religions, since it’s what they always ask when anyone talks to them about the Orthodox faith. But this is a question which is related to all baptized Orthodox Christians who vacillate between doubt and disbelief, as well as those who have consciously renounced the Orthodox baptism their parents once gave them and have relinquished their membership of the Orthodox Church of Christ. The question also has to do with those who are Christians in name are only, but who never think about Christ in their lives.

One reason, then, why I want to be an Orthodox Christian is that Orthodoxy isn’t just another religion reflecting human efforts to discover God, but is the revelation of God to us through history. In the Orthodox Church, people experience the Truth.

The Orthodox Church is experienced as the realm of purification from the passions, which have their roots in egotism and in the delusion that biological life and whatever that entails, is the real life. Within the Church, then, we’re cured of our passions. We’re cured in a positive way, not merely by being set free from these passions, but by replacing them with experiences of love, what Saint Maximos the Confessor calls a ‘loving relationship’. And in the final analysis, the Church is a way of life precisely because it is the Mystery of Love, the Mystery in which we experience our liberation from the passions in a positive way.

An attempt is made to answer this question in a series of seminars called GETTING TO KNOW THE ORTHODOX FAITH, through the experience and life of the Church over 20 centuries, in accordance with the teaching of the Gospel and the Fathers of the Church.  The seminars are being organize by EVGENIOS VOULGARIS DIGITAL ACADEMY.

For more information and bookings about the GETTING TO KNOW THE ORTHODOX FAITH seminars, visit the site of the academy voulgarisacademy.com or the collection of the seminars at https://www.eventbrite.com/cc/getting-to-know-the-orthodox-christian-faith-233269

ABOUT THE EVGENIOS VOULGARIS DIGITAL ACADEMY

Two centuries and seven decades have passed from the time when perhaps the most well-known education center under Turkish rule was founded in the Greek lands, and it has remained active to this day. Two hundred and seventy years since the time when the wise and virtuous Neofytos Kavsokalyvitis, the first principal, crossed the threshold of the Athoniada School. He was succeeded by “the renowned Evgenios Voulgaris” one of the most important figures in Hellenism, and, indeed, of the European spirit as a whole.

In 1749, the Holy and Great Monastery of Vatopaidi founded the Athoniada on a hill close to the monastery and it became the most important center of learning for the enslaved population, producing such outstanding personalities as Saint Kosmas Aitolos, Rigas Feraios, and Saint Athanasios Parios. At the time of its zenith, the principal was Evgenios Voulgaris. The greatest men of letters of the time taught at the Athoniada, scholars such as Sergios Makraios, Ioannis Pezaros, Panayiotis Palamas the martyr Bishop of Platamonas, Dimitrios Kyprianos the Cypriote, and others. These were all among the most dynamic proponents of the spiritual, ideological and political currents which shaped the communal life of the Greek nation during the decades which preceded the national renaissance. 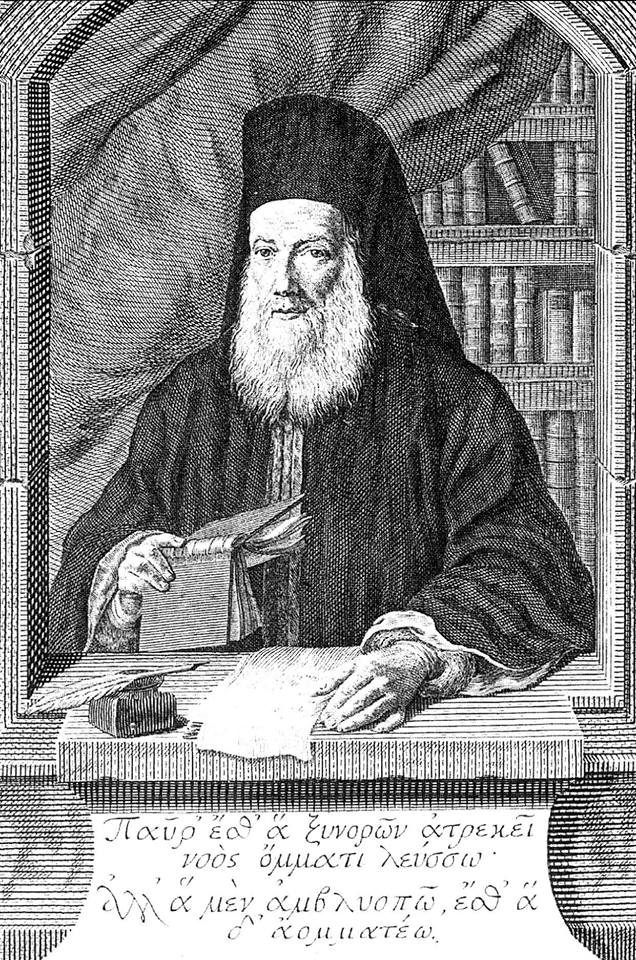 Evgenios Voulgaris was a multi-faceted personality: theologian, philosopher, linguist and natural scientist. He was unquestionably the greatest teacher of the Greek nation. With his wisdom and extensive learning, with his educational activities and his whole oeuvre, he inaugurated a new era in the spiritual history of modern Hellenism. He managed to graft new strains of thought onto Greek education, and by balancing scholarship with faith, bridged the spiritual tradition of Orthodoxy and that of classical education. He was a real modernizer as well-being consummately traditional.

Especially at the time of Voulgaris, the Athoniada became a beacon of knowledge at the heart of the Athonite niptic tradition. The experience of Orthodoxy embraced the highest achievements of the human spirit. Human pettiness, misunderstandings and objections were overcome by history itself and by results. Two centuries have passed since the national renaissance of 1821. It’s no coincidence that the two most emblematic personalities who prepared the ground for the Greek Revolution of 1821 came from the ranks of pupils in the Athoniada: Saint Kosmas Aitolos, Equal to the Apostles, and Rigas Feraios. The former laid the spiritual foundations for the Greek nation, rebaptizing people through the combination of Orthodox tradition and knowledge: “What you need is your soul and Christ… Build schools!”. In his poem Thourios, Feraios records the tribulations of slavery and the desire for freedom on the part of the downtrodden Greeks and their co-religionists in the Balkans.

So the Athoniada became a workshop for freedom. Freedom from ignorance, prejudices and superstitions, from the absence of an authentic Christian life, from the tyrannical repression of the Ottoman conquerors. Evgenios Voulgaris was the outstanding scholar cleric of the 18th century who fought far from his homeland – he’d left the Athoniada and was consecrated Archbishop of Kherson- for the benefit of enslaved Greece. He supported the ‘Greek plan’ which aimed at the liberation of the Greeks and pressed Empress Catherine of Russia to implement it.

Over the course of the centuries, the Athoniada may have lost some of its initial luster. But its legacy to Greeks and to the whole of Orthodoxy is of inestimable value. It has bequeathed to younger generations the burden of responsibly for the combination of the new with the old, in each era. This requires scholarship, knowledge, courage, self sacrifice and continuous vigilance.

The Athoniada was founded by the Holy Monastery of Vatopaidi at a time of tremendous financial difficulties. Two centuries later, the same monastery, again in times of tribulations and financial hardship and following the tradition of Evgenios Voulgaris, is bringing the new closer to the old, through the St Maximos the Greek Institute. It has joined the Orthodox tradition with digital technology by creating Pemptousia, the electronic periodical and digital TV station serving Orthodoxy, Culture and Science. Pemptousia presents the most noble achievements of the human spirit in a continuous dialogue with people today, their concerns and their deepest needs.

But as the example of the historical Athoniada shows, the provision of knowledge alone is insufficient to produce personalities capable of changing history, such as Kosmas Aitolos and Rigas Feraios. A necessary premise is the systemization and teaching of the stored knowledge, always under the guidance of experts who are well suited to the task. The economic, political and social conditions within Greece and outside are again difficult for a modern enterprise such as that of 1749. But the “Saint Maxim the Greek” Institute has founded the “Evgenios Voulgaris” Digital Academy, which brings the old back closely to the new, Orthodoxy to culture, science and philosophy, and will make them available in a creative, systematic, responsible and modern manner.

In close proximity to the Athonite laboratories of the Prayer of the Heart, Voulgaris taught logic, introduction to philosophy, metaphysics, arithmetic, geometry and cosmography, from notes of his own translations of modern Western works. His teaching choices and practices were innovative for his time. His aim was never to provide knowledge uncritically, but to aim at the real needs of the people of his time, who were thirsting for learning. He was a passionate supporter of the value of higher education. It would be entirely fair to call him the “Saint of Letters and Sciences”.

Following his lead, the “Evgenios Voulgaris Digital Academy” will offer people today organized knowledge of Orthodox tradition and culture in a continuous dialogue with the achievements of science, the arts, and the spirit. Its program of digital seminars will be structured and kept fresh by people who are tried and trusted internationally, in the Church and the academic realm.

Two hundred years since the Greek renaissance, and two hundred and seventy years after the foundation of the historic Athoniada which has contributed to its establishment, the “Evgenios Voulgaris Digital Academy” is being asked to respond to the demand for a new revolution and renaissance for people today, who, bound by the dictates of consumerism, globalization, secularization and pandemics, crises and all manner of everyday difficulties, are looking to find a real path to freedom in the authentic knowledge of the Truth: “Then you will know the truth, and the truth will set you free” (John, 8, 32).