Homily on St Thomas the Apostle

Today we commemorate St. Thomas the Apostle’s declaration of faith in the Risen Christ as his Lord and God (see John 20:28). It is the 8th day after Pascha, and is called “Thomas Sunday” in memory of this event. From what we know in the Gospels, St. Thomas was a fisherman. There is a particular mention of him fishing in the Sea of Galilee (also called Tiberias) (see John 21:2-3). No doubt the Lord also called St. Thomas from the water to follow Him, as He did with Sts. Peter, John and the others. St. Thomas greatly loved Christ, and was devoted to Him. When the Lord announced to His Disciples that Lazarus had died, and that He had to go to Bethany on the outskirts of Jerusalem (where the Jews were conspiring to kill Him), it was St. Thomas who said to the others: “Let us also go, that we may die with Him” (John 11:16).

He was a man who would not allow anything to stand in the way of what he had to do, which he would prove with his life. He was practical and guided by experience and reason, rather than emotion or sentiment. He was not satisfied with vague notions, but wanted direct answers. There are several incidents in the Gospels which illustrate this (see John 14:2-5). This is especially the case when Jesus made His appearance on the day of His Resurrection to the other Ten Disciples. St. Thomas was not there at the time. When he returned to their company, the others declared to him that they had seen the Lord and that He is risen. St. Thomas was not convinced, saying that he would not believe unless he sees Him and touches His wounds. 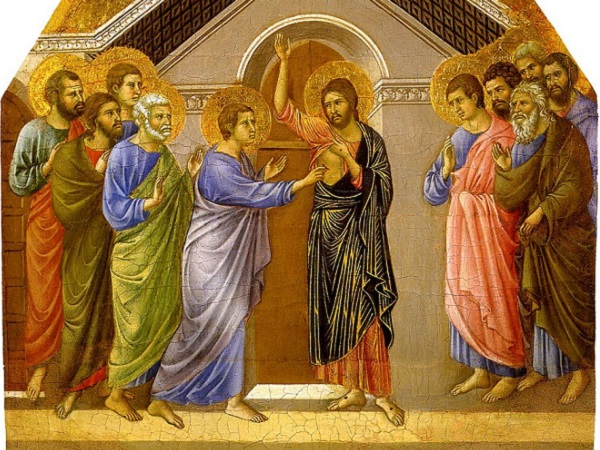 Such skepticism from one of the Apostles may come as a surprise to us, but this doubt proved to be an act of dispensation by God, because it answers those who would dispute the divine nature of Christ. It is a rebuttal to the idea that somehow the Resurrection of Christ is a delusion or deception by those who were devoted to Him. The reality was much different, and it was not only St. Thomas who doubted. When the Myrrh-Bearers came and announced the Lord’s Ressurection, how was it received? “Their words seemed to them like idle tales, and they did not believe them” (Luke 24:11). This initial struggle to believe in the Risen Christ is an example for those in every age up to the present, who wrestle with faith. The Apostles declared Christ’s Resurrection after they had seen Him, spoke to Him, and lived with Him for 40 days after His Resurrection—a confession of faith signed with their own blood! They were persecuted, imprisoned, tortured, exiled, and martyred precisely because they proclaimed the Risen Christ as true God.

This was certainly the case for St. Thomas the Apostle. After his proclamation before Jesus (“My Lord and my God”) and enlightenment by the Holy Spirit on Pentecost, he dedicated his entire life to preaching the Gospel of the Risen Lord. This mission brought him to Persia and as far as India, where many people believed in Christ. His love for the sick and needy, combined with inspired teaching and amazing miracles, attracted many crowds. Among them was the Indian king Gundaphar and his wife. He continued this apostolic work into the years of the new king Misdeus, and the newly baptized included the queen Tertia and her children. This made the king furious, who then ordered that the Apostle of Christ be executed. This was done in the year 72 AD, when the king’s soldiers led St. Thomas to the mountains, where they pierced his body with their swords. This is how the Malabar Church in Southwestern India was established, which is known even today as the Church of St. Thomas the Apostle.

Three hundred years later, in the year 357 AD, the relics of St. Thomas were brought to the Church of the Holy Apostles in Constantinople, to fulfill the desire of St. Constantine the Great to honor all of the Apostles in the capital city.

My beloved brothers and sisters, after the declaration of St. Thomas, which we heard in the Holy Gospel, the Lord replied to him: “Because you have seen Me, you have believed. Blessed are those who have not seen and yet have believed” (John 20:29). May we be counted among those who “do not see, and yet believe.” May we also be with those who not only believe in the Resurrection of Christ but, as St. Paul the Apostle writes, know Christ and the power that comes from His Resurrection, bringing a new spiritual life (see Philippians 3:10). Amen.