‘Lord I believe, help my unbelief’

When the Lord is asked to cure a young man with a demon, the first thing he does is examine the faith of the father who’s asking for the healing, because belief is a prerequisite for a miracle. But when he’s asked by his disciples why they themselves couldn’t rid the young man of the demon, Jesus doesn’t reply, as might have been expected, that it was because of their weak faith, but says that it was because of the absence of two premises in cases such as this: prayer and fasting. This is because, as the Fathers of the Church emphasize, prayer is the power of heaven and fasting the power of the soul.

Prayer and fasting are two pillars of the faith. They’re two fires which sear the evil spirits. Through fasting, the vessels of the flesh and soul are cleansed of the stench of their contents, from worldly passions and wickedness. Through prayer we attract the grace of the Holy Spirit to our cleansed hearts. 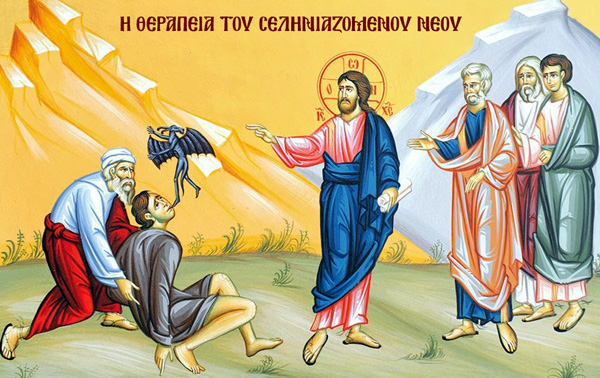 The Lord declares his  profound grievance: ‘You unbelieving generation. How long will I be with you? How long shall I suffer you?’. It’s as if he were saying not only to the crowds, but primarily to the father of the young man: ‘Because you don’t believe, you’re an impediment to your son being cured’. And when the father, who was stricken with grief, again asked the Lord if he could do something, Christ corrected and chastised him once more and told him ‘If you can believe all things are possible to those who believe’. Jesus wanted to show again that the man’s shaken faith was the obstacle to the miracle. ‘I believe, Lord, help my unbelief’. Free me from my lack of faith and do you yourself make up the deficiency of my faith.

As soon as the wicked demon saw the Lord, through the eyes of the young man it was possessing, it was immediately overcome with satanic frenzy, since it knew it would be forced to abandon its victim. This caused strong convulsions in the young man. He fell to the ground rolling around and foaming at the mouth. The Lord deliberately allowed the young man this last trial so that the father and the others who were there would realize how greatly the demons feared his power.

The disciples were at a loss to understand why they themselves were unable to cast out the demon. Saint John Chrysostom  says: ‘It seems to me that they were worried and afraid that they’d lost the grace which had been entrusted to them’. The Lord told them forthrightly: ‘Because of your lack of faith’.

We’ve seen how the unbelief of the father and the weakness of the apostles troubled Christ. What frustration he must feel at the state of Christians today, who, after so many miracles, so many martyrs and new martyrs, so many signs, continue to be in thrall to their passions, to be slaves to them. Alas, no-one would boast that today’s generation has preserved the early Christian purity in our relations with God, with other people and with ourselves.

If people have deep faith, if they pray to the Triune God without ceasing, if they observe the genuine Orthodox Christian tradition, if they read the Holy Scriptures, if they proceed through life on the basis of the holy canons which were adopted by the Synods- Ecumenical or Local- they’ll be able to face any problem that troubles and torments them.

The virtues with which people are endowed can be increased with spiritual asceticism and unceasing struggle and can bear fruit which makes believers sharers in the grace of God.

Faith without spiritual struggle and spiritual works is, in the end, dead. As is faith divorced from Christ. Christ wanted only one thing in order to perform the miracle: to see the faith of the unhappy father. The man was endowed with the virtue of humility and recognized the inadequacy of his faith as it then was, so he asked the Lord to increase it and the miracle occurred.

The Lord teaches us that we must fight against the wicked demons and the passions entrenched within us with persistent prayer to God, fortified with fasting, so that with divine strength and support we’ll emerge as victors and standard-bearers.

We should beseech the Lord unceasingly to give us greater faith, because of the lurking danger that our faith will be shaken by the events taking place in the world.