On the Holy Feast of the Palms

‘Six days before the Passover, Jesus came to Bethany, the home of Lazarus, whom he had raised from the dead. There they made a meal for him’. Martha was serving and Lazarus ate. This was a sign of Lazarus’ real resurrection: that many days later, he was alive and eating. It’s clear, then, that the meal took place in the home of Martha. They welcomed Jesus because they were friends and were loved by Him. […]

‘When the great crowd of the Jews learned that he was there, they came not only because of Jesus but also to see Lazarus, whom he had raised from the dead’. And when they saw the miracle they all believed. Not satisfied with their own wickedness, however, the leaders also attempted to have Lazarus killed. As it says: ‘So the chief priests planned to put Lazarus to death as well, since it was on account of him that many of the Jews were deserting and were believing in Jesus’. Be that as it may, they wanted to put Christ to death because He’d broken the Sabbath, He’d made Himself equal to God and, according to them, also because of the Romans, so that they wouldn’t do away with the land, the nation and with them. But what was the charge against Lazarus, that they should want to kill him, other than the crime that something good had happened to him? You see how their whole intention was murderous? Now, He’d worked many signs, but none of them made them so furious as this, not the paralytic nor the blind man. Because this in itself was more miraculous. It had taken place after many others and it was absolutely extraordinary to see a man four days dead yet walking around and talking. What stupidity on the part of the supposed high priests. All they achieved was to involve murders with the celebrations for their feast. There [in the case of Christ] they believed He was abolishing the Sabbath and leading the multitudes astray by deceit, but here, since they had nothing to lie about, they simply directed their attack against the person who’d been cured. Here they couldn’t even say that He opposed the Father, because the command [the authoritative ‘Lazarus, come forth’] silenced them. 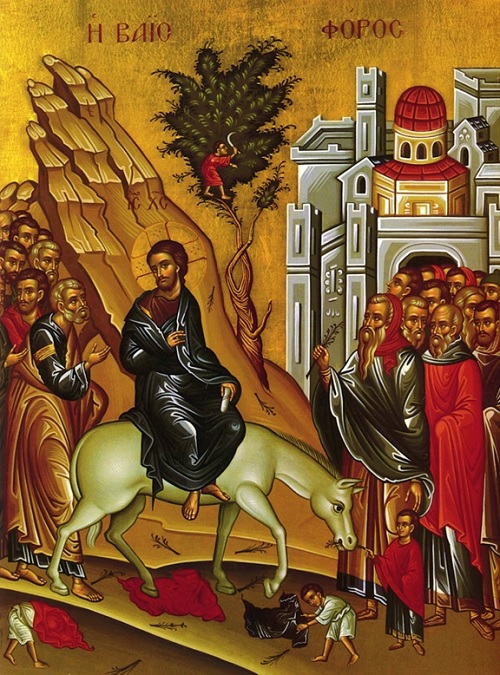 Since what they always accused Him of was groundless and this miracle was particularly outstanding, they resorted to murder. Which they would have done in the case of the blind man, as well, had they not had the excuse of the Sabbath. In any case, the blind man was unimportant and they simply expelled him from the temple, but [Lazarus] was of better standing, as is obvious from the numbers who came to comfort his sisters. So the miracle took place before the eyes of many people and in the strangest manner, which is why crowds flocked to see Him. This is what annoyed them: that, though the feast was continuing, people were leaving everything and making their way to Bethany. So they decided to do away with Him and didn’t think it wickedness on their part. That’s how murderous they were. This is why the first of the laws begins: ‘Do not kill’. And the prophet condemns this saying: ‘For your hands are covered in blood’ [Isaiah 1, 15]

‘The next day the great crowd that had come to the festival heard that Jesus was coming to Jerusalem. So they took branches of palm trees and went out to meet him, shouting: “Hosanna! Blessed is He who comes in the name of the Lord, the King of Israel!”’. How was it then, that though He didn’t walk boldly through Judea and withdrew into the desert, He now came boldly to Jerusalem? Because their anger had abated with His withdrawal and now that it had passed He came. Besides, the crowds which preceded and followed Him were of sufficient size to worry the leaders. Because no miracle disturbed them so much as that of Lazarus. Another Evangelist [the Synoptic Gospels] writes that they spread their garments at His feet and that the whole city shook from the honour accorded to His entry.

How is it that the other Evangelists say that He sent His disciples to untie the donkey and the colt whereas [John] merely says ‘Jesus found a young donkey and sat on it’? Well, it was natural for both to happen: the disciples returned with the colt, and He sat on it. Again, the branches of palms and olives and the clothes they placed on the ground demonstrate that they thought of Him more highly than of a prophet and they cried to Him: ‘Hosanna! Blessed is he who comes in the name of the Lord’. You can see that this choked the high priests and scribes more than anything, because people believed that He wasn’t anti-God. It was this above all else that divided people: that He said He came from the Father. The prophet said ‘Do not be afraid, daughter Zion, but rejoice greatly’ because most of their kings had been unjust and grasping and had delivered them to their enemies. They perverted the people and made them subservient to their foes. ‘Take courage’, he says, ‘this one is not like them. He’s meek and merciful’. This is apparent from the donkey, since He didn’t make His entry at the head of a body of troops, but only with a donkey.

‘So the crowd that had been with him when he called Lazarus out of the tomb and raised him from the dead continued to testify. It was also because they heard that he had performed this sign that the crowd went to meet him’. Because so many people wouldn’t have changed their mind so quickly if they hadn’t heard of the miracle. ‘The Pharisees then said to one another, ‘You see, you can do nothing. Look, people have gone after him!’ [‘people’ is translated in some versions as ‘world’, because the Greek word kosmos means both]. I believe that these words were spoken by those who were, of course, healthy, in spiritual terms, but lacked the courage to declare their opinion boldly. Saint Paul also gives this as a reason when he talks about the resurrection. What defence will those people have who don’t believe in the resurrection?

Leaving this subject, then, so as not to keep you unnecessarily with a labyrinthine homily, let me just say this. Take care to listen to the reading of the divine Scriptures and don’t quarrel over anything useless, to the detriment of those who listen to you. This is also what Saint Paul advised Timothy to do, even though, of course, he was full of great wisdom and had the power to work miracles. So let us show obedience to him, and avoiding idle talk, let’s engage in works, instead. By that I mean loving others, being hospitable, and showing interest in charity, so that we may attain to the good things which God has promised to us, through the grace and love of Our Lord, Jesus Christ, through Whom and with Whom be glory to the Father and the Holy Spirit to the ages of ages. Amen