Whosoever is a devout lover of God, let him enjoy this beautiful bright Festival. And whosoever is a grateful servant, let him joyously enter into the joy of his Lord. And if any be weary with fasting, let him now receive his reward. If any has toiled from the first hour, let him receive his just debt. If any came after the third, let him gratefully celebrate. If any arrived after the sixth, let him not doubt; for he too shall sustain no loss. If any have delayed to the ninth, let him come without hesitation. If any arrived only at the eleventh hour, let him not be afraid by reason of his delay; for the Master is gracious and receives the last, even as the first. He gives rest to him, who arrives at the eleventh hour, as well as to him, who has labored from the first. He is merciful to the one who delays, and nourishes the first. He gives also to the one, and to the other He is gracious. He accepts the works, as he greets the endeavor. He honors the deed, and the intent He commends. 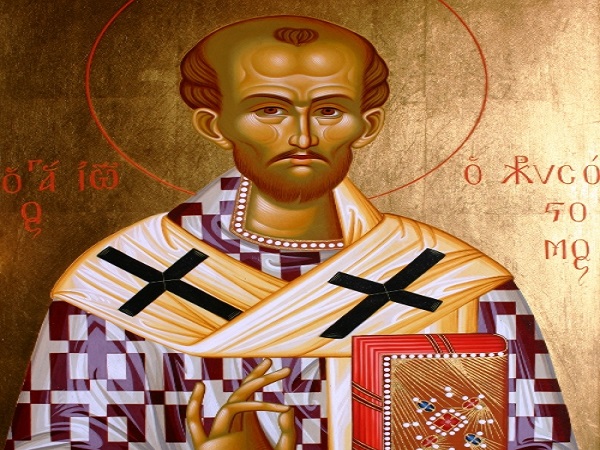 Let all of you then enter into the joy of our Lord. The first and second enjoy your reward. Your rich and poor, rejoice together. You temperate and you heedless, honor the day. You who fasted, and you who did not, rejoice today. The Table is richly laden. All of you, fare sumptuously on it. The calf is a fatted one; let no one go away hungry. All of you enjoy the banquet of faith. All of you enjoy the riches of His goodness. Let no one grieve poverty; for the universal Kingdom has been revealed.

(Parishioners repeat, “It was embittered,” and “He Is Risen” each time the Priest pauses briefly).

The Apolytikion (Hymn of St. John Chrysostom)
Grace, as a torch shining forth from your mouth, illuminated the earth; it was deposited in the world treasures, which could not be purchased, and set forth the height of humility. Wherefore, teaching by your own words, O Father John Chrysostom, intercede with the Word, Christ our God, to save our souls.