On Lazarus Saturday, I realized I couldn’t find my copy of the services for Great Week, so, naturally, I went down to the local supermarket and bought another copy. This ease of access to Church supplies (charcoal, wicks, incense, televised services for the sick and so on) is one of the many advantages of living in an Orthodox country. Another is that the same supermarket, or, indeed, any grocery store, will stock packets of dye for colouring eggs at Easter. In some Orthodox countries, eggs are dyed a variety of colours, but in Greece they’re usually red. There are a large number of explanations for this, none of which is particularly convincing. When you read, for example, that the tradition goes back to Constantine the Great at the ‘Byzantine’ (!) court, or that it derives from a disbelieving woman who said: ‘I’ll believe in the Resurrection when these eggs turn red’, you can be fairly sure you’re on the wrong track. It appears that the tradition is pre-Christian and there is some evidence that for a time the Church barely tolerated the practice, considering it ‘Hellenic’, that is ‘pagan’ Since then, however, it has been adapted to suit our narrative: that the red symbolizes the blood of Christ, the shell the tomb and the yolk the life within the tomb. 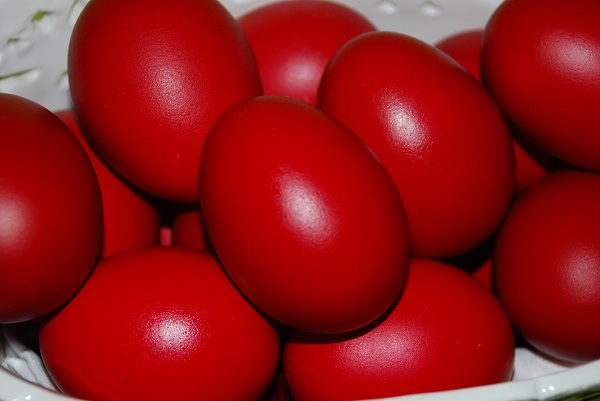 So the simplest way of colouring the eggs is to buy a packet of dye and follow the instructions.

By the time you read this, however, it may be too late to book a flight to Greece and be back home for Great Thursday, so you will then have to use the traditional method, which is very simple. If you can boil an egg, you’re well on the way to colouring it.

The first thing is that the eggs have to be room temperature and clean. It’s also better if they’re white. If you’re using packets of colouring this doesn’t matter, but natural dyes aren’t as intense.

The proportions are 4-5 pints of water, half a cup of vinegar (some people also add baking soda which they claim helps with the colour), three to four cups of whatever vegetable you’re using or 3-4 spoons of spice.

For red eggs, boil the eggs in a large container, together with four chopped beetroot bulbs and the vinegar. There should be just enough water to cover the ingredients. Another way of doing this is to boil the eggs and beetroot separately and then use a brush to paint the beetroot juice onto the eggs, though this sounds like something for the leisured classes. It’s also possible to achieve a good result using red onion skins (3-4 double handfuls). Whichever you use, boil for 10-12 minutes or so and then leave for as long as you can- up to 20 hours. The longer you leave them, the more intense the colour should be. When you’re ready, drain them on kitchen paper and polish them with a cloth and oil. And that’s it.

If you want other colours, substitute for the beetroot/ onion skins:

Light blue: red cabbage. You’ll just have to trust me on this.

Green: spinach. About a kilo.