3.Faced with the Cross of Christ, then, we have two entirely different conditions: that of the blasphemous man and that of the theologian who saw God. The crucified Lord acts as scales of justice, as the measure by which people have to reveal their inner state to him, the innermost depths of their soul. Faced with the Cross, we’re stripped spiritually; we can’t hide. In any case, how could anyone hide from him for whom there’s no concealed creation and whose eyes see everything clearly and plainly? And, by the same token, we ourselves can’t remain indifferent. There’s no detached attitude to Christ. He himself told us: ‘Those who are not with me are against me’. This is what the venerable Symeon prophesied about Christ when he received him as an infant in the temple: ‘This child is destined to cause the falling and rising of many in Israel, and to be a sign that will be spoken against’. Faced with Christ, you either fall or rise. This is the point that people in the world can’t reconcile themselves to. And this is where the prophecy referred to above is verified, with the two robbers crucified with Christ.

4.So the Cross of the Lord is the ‘scales of justice’, a characterization which reveals far more than one might superficially suspect. What do we mean? Two necessary observations ought to be made here. 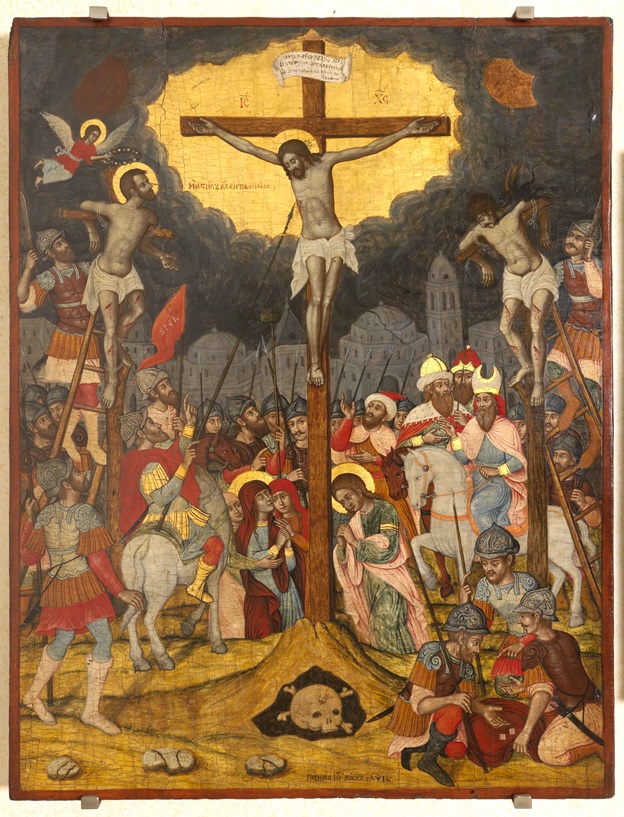 The first is that, on the Cross of the Lord, God’s justice is revealed, and that it operates in a manner which infinitely transcends its merely human counterpart. What is human justice? There’s the ‘justice’ of the selfishness of ‘might is right’. This is justice which expresses in the most flagrant manner the essence of sin, egotism: that sick state which is identical to being possessed. There’s also the justice that demands equality, that everyone be the same. This is justice which insidiously promotes injustice, because not everyone has the same needs. How, for example, can the father or mother of a large family have the same needs as a single person? There’s also the justice which, indeed, imposes equality in accordance with the needs of each person, and this is actually the best version of human justice. But the trouble here, too, is the word ‘imposes’, because, in Christian terms, anything that’s not done freely and out of love has no moral weight or value.

But there’s also the real, charismatic justice we see on the Cross of the Lord and thereafter in the lives of the saints. This, always, is to give to others and to overlook my own interests, out of love for them. What was it that the Cross manifested so that we say that God’s justice was at work there? The most innocent person of all, God incarnate, in whom there was no sin, and no guile ever in his mouth, paid for and was punished for the sins and responsibilities of people who really were guilty. On the Cross, Christ takes away our sins, the sins of all of us,  and becomes accursed for our sake. In other words, divine justice doesn’t function in, say, the ancient Greek fashion where if you were to blame you paid. Instead, if you’re to blame, you’re exonerated. Provided you accept the love of your Creator, because, as we’ve said, he’s the one who takes on our responsibilities. In Christian terms, justice means love and humility, and wherever there’s justice without these elements, it’s not Christian.

Let’s see, for example, what Saint Isaac the Syrian, one of the greatest of the niptic fathers of the Church has to say about this. In his reflections on precisely this matter, he says the following, which is seemingly paradoxical: ‘Don’t call God just, because his justice isn’t apparent in his works… How can you call God just when you read about the laborer’s wages in the Gospel? He says, “My friend, I don’t want to do you an injustice, but I want to give to the last person what I give to you. Your eye may be wicked, but I am good”. How can anyone call God just when they read in the Gospel about the prodigal son, who wasted his father’s riches on riotous living? No sooner had he shown contrition than his father ran towards him, fell on his neck and gave him authority over his wealth… Where’s God’s justice? We’re sinners and Christ died for our sake’.

The second observation is that the Cross which reveals God’s love and humility and which is called his ‘glory’, is also the scale, the measure and the mirror by which we’re measured as Christians. And this is where the difficulties begin. Because the measure isn’t a suggestion, however true. It isn’t a philosophical principle, a moral system nor even the voice of our conscience, if that’s functioning. It’s the Cross, which we’re called upon to experience as a personal fact. Not merely once in our life but on a daily basis, unceasingly, every hour, every minute. These aren’t our words; they’re the words of our God himself. ‘If anyone wishes to follow me, let them deny themselves, take up their cross and follow me’. In other words, following Christ means the way of the cross. This, in turn, means death, the death of our selfish, sinful outlook on life so that we can walk in the steps of the Lord. However painful this may sound, it’s the most central of truths. If you’re to be a Christian, and not in name only, you have to decide on your death. The Spirit of God tells us directly in the Revelation: ‘Be faithful unto death’.

This is why we hear Saint Paul confess: ‘I have been crucified with Christ. I no longer live, but Christ lives in me’. And if there are so many problems in our life and if we appear to be so inadequate as Christians, it’s precisely because we’re squint-eyed spiritually, trying to reconcile the irreconcilable: life with God and life with the sinful world. But the Lord tells us that no-one can serve two masters, while Saint Paul says that if you want to be a friend of the world, you’ll be an enemy of God. Saint Païsios comes to mind, when he was still the young Arsenios, and was tempted towards unbelief by a student from the same village. How did he overcome the seeds of doubt sown in his pure heart by the godless student? With the decision he took to believe in Christ even if he died over it. No sooner had he fixed this in his mind than Christ appeared to him!