For secular people today, focusing on an ascetic saint is a problem. Of what relevance is the ascetic figure of Saint John, the author of the Ladder, who, with tears, with fasting and with spiritual asceticism acquired and preserved the grace of God. 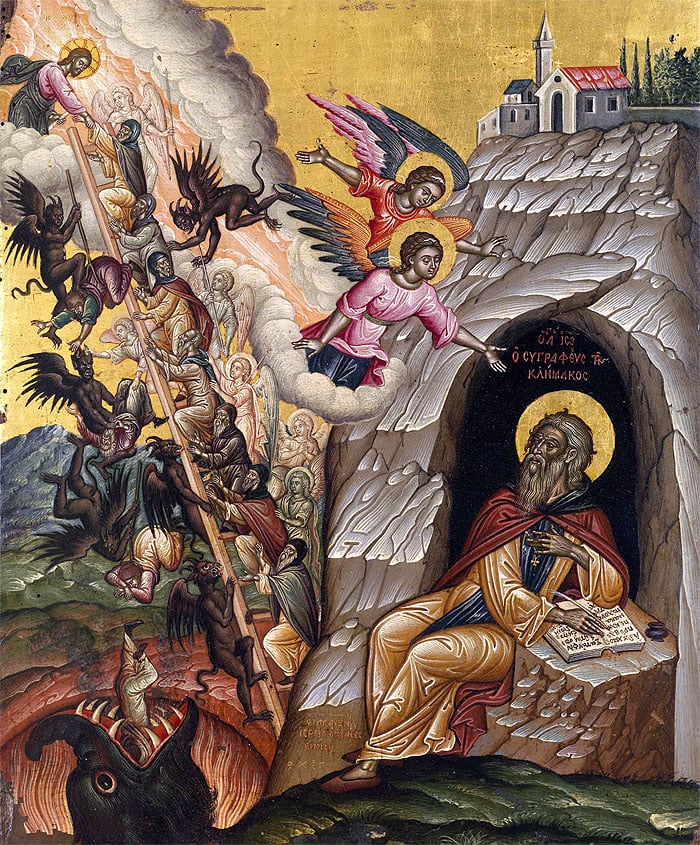 In Orthodox teaching, the ascetic life is nothing other than the transcendence of our egotism, the effort, in grace, to observe God’s commandments, to live the life of Christ. The Orthodox ethos is ascetic. The modern objection that an ascetic can’t speak to us is incorrect for two basic reasons. In the first place, there’s nothing in the Orthodox Patristic Tradition about a difference between the monastic and secular way of life, nor between the married and unmarried, but only between people who have the Holy Spirit and people who don’t. Secondly, because our way of life, as described by Holy Scripture and experienced by the saints, is ascetic. The ordinances to ‘strive to enter through the narrow gate’, ‘the kingdom of heaven suffers violence, and the violent take it by force’ and ‘put to death your members which are on the earth’ are absolute and universal in their relevance and apply to all of us, irrespective of where we live and our way of life. Just as the salvation wrought by Christ is offered to all who are baptized ‘in the name of the life-giving and supreme deity of the Trinity’, so the path of salvation is common to all of us.

End or means?
Since perfection isn’t a human task and can’t be cultivated or achieved simply through the efforts of our natural powers but only as a gift of the Holy Spirit, asceticism therefore can’t be an end in itself, but only the means of acquiring God’s gift.

It’s a fact that people in our own time are unable to understand the meaning of asceticism in our life. Even in the monastic life there are instances which reveal the fundamental aberration of our modern spiritual decline: severance from the ascetic ethos.

This is why the Church very wisely chooses times to emphasize the contests fought by its saints, as well as appointing forms of asceticism which train people’s wills and turn them from the worst to the best, enabling us to preserve our self-awareness.

The observation of Christ’s commandments is the seal and completion of our efforts. Without our fervent response to God’s will and the fulfilment of his Gospel commandments, it’s impossible for us to cleanse ourselves of the stain of sin and to attain our sanctification in Christ. Some think that they believe correctly even if they don’t keep the commandments. Others again observe them and expect to enter the kingdom of heaven as a reward which God owes them. Both are far from the truth. There is no effort worthy of such a reward. Saint Mark the Hermit says: ‘The kingdom of God isn’t payment for labor, but grace of the Lord, prepared for his faithful servants’. With his wise words, Saint Gregory Palamas urges us to: “Guard the grace of God undiminished within us, entirely devoting ourselves to obedience and the fulfilment of the holy commandments. And presenting ourselves to God with works, since he also gave himself for us’.

Those of us who honor the saints and ascetics of the Church should also honor their way of life. Let us pray for this and strive for it.