The Descent into Hades: from Biblical Reading to Folklore to Mythology

The ‘after death’ question is one of the most enigmatic and also most awe-inspiring of issues. It’s certain that we would gladly exchange all the knowledge we’ve garnered over the passage of the centuries for well-founded and properly supported information concerning what happens when people leave this life.

The central image in the Orthodox tradition is the resurrection of Christ as the descent into hell. We have two specific allusions to this descent in the New Testament. In his first epistle, Peter writes:

‘After being made alive, he went and made proclamation to the imprisoned spirits, to those who were disobedient long ago when God waited patiently …’ (3, 19-20); and 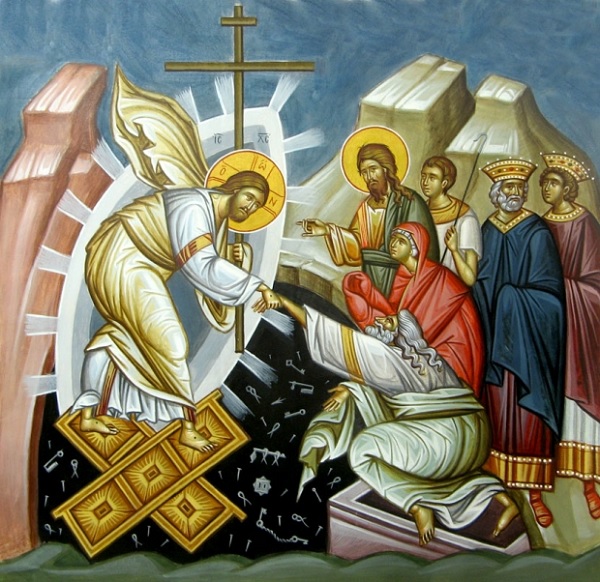 We also see references to the descent into Hades in Paul’s epistle to the Ephesians (4, 8-10).

‘This is why it says: “When he ascended on high, he took many captives and gave gifts to his people”.  What does “he ascended” mean except that he also descended to the lower, earthly regions? He who descended is the very one who ascended higher than all the heavens, in order to fill the whole universe’.

Of course, Orthodox hymnography provides us with richer and clearer material.

Two apocryphal narratives also give us further information. In the first place the Gospel of Bartholomew and then the second part of the so-called Gospel of Nicodemus, which is entitled ‘The Descent of Jesus into Hell’.

This latter text is of exceptional interest both because of the informal style of the narration as well as for its content. Its structure and texture belong to a literary and theological model which first appeared in the East, with the Epic of Gilgamesh, culminated in the Odyssey and returned in a different form and style in Aristophanes’ Frogs [when Dionysus goes to Hades to bring back the playwright Euripides]. It was then repeated in Virgil [Aeneid, book VI] and achieved a variety of forms in Byzantine and later years.

The content of the ‘Nicodemus’ text has a happy ending: after Christ binds Satan, and hands him over to Hades to guard until the Second Coming, he leads Adam and the Prophets back to paradise and thus closes the circle which opened with the expulsion of the first-created.

By contrast, the Homeric ‘Nekyia’ describes Hades as a terrible place of no escape. A ‘nekyia’ is a rite associated with Greek mythology and is aimed at invoking the dead in order to learn the future. This is the title given to rhapsody 30 of the Odyssey, which relates the visit of  Odysseus to the [dead] seer Tiresias, in a desperate attempt to return to Ithaca. In this extract, there is no redemption. The dead, young and old, children and fully-grown warriors, wander about eternally as shades, without any hope at all. Even if some soul such as Eurydice manages, even momentarily, to see the light again, it is an isolated incident and does not disprove the general rule.

Both of the texts we have quoted are more literary than dogmatic pieces of writing.

The ‘descent’ into the underworld is a widespread motif which takes a variety of forms in many mythologies. The oldest surviving narratives are associated with the Sumerian Inanna, queen of heaven and earth (Ishtar to the Akkadians, Astarte to the Assyrians and Ashtaroth to the Palestinians) who was goddess of love and fertility. Moreover, in the folk tales of many peoples, the descent of a young man into the underworld to save the maiden who had been abducted by a dragon is a very common motif.

The descent into Hades linked seamlessly to folk beliefs. This is why, from Great Thursday to Great Saturday it is customary for relatives to go to cemeteries and leave offerings on graves, to share food with the dead. In Epirus, they say that on that day, the souls exit Hades and ‘breathe easily’ and ‘walk to the flowers’ as Christ is rising. They remain outside for fifty days, until Pentecost. Then, at the Kneeling Service, the kneel with us, bow down before God and then return to their place. In other places it is believed that the liberation of the souls lasts not until the Sunday of Pentecost but to the day of the Ascension. The Savior ascends into heaven and the dead descend into the underworld. In other words, the return date.

We come across such motifs regarding the descent into Hades and the negation of death in all civilizations and at all times. The Christian descent, however, has something radically different: through his descent and the destruction of the gates of Hell, Christ eliminates death once and for all. In the Christian faith, death is not an isolated event, but the tragic consequence of our ancient fall. The main aim of the risen Lord, as God and human person, is to restore the relationship between God and ourselves, a relationship which is the source of life for us. This restoration of our relationship immediately and automatically brings about the death of death as a punishment, as hell.

From the moment of the Resurrection, those who decide to unite themselves with Christ through the sacramental life of the Church do not know death, except as an everlasting state of life, continuously nourished by God, the life-bearing Spring.