‘The greatest sin these days lies in the fact that people are plunged into despair and no longer believe in the resurrection’ (Saint Sophrony in Essex). In the pre-Christian and also, later, in the world outside Christianity, belief in the immortality of the soul was widespread. But even this belief is largely disregarded in our own times. It’s typical that scientists who are concerned with human psyche don’t usually treat it as an ontological feature of a person, but rather as a biological function. People today live and die with no particular prospect other than biological life and biographical activity. Within this context it’s not difficult to understand the pervasive pessimism, however much we may want to try to cast it off or dispel it.

Death is the main, constant, and most certain threat which people face. It’s a threat which doesn’t affect us merely through its immediate advent, but also through its indirect and far-reaching presence. It affects us at every turn and phase of our life and activities; with each illness, every weakness, with every danger and each failure. The threat of death lurks behind every spiritual and bodily pain and decrepitude. We see the same threat in the nature that surrounds us and which constitutes our body in the broad sense. At the same time, however, we also feel a deep-seated expectation. In the unceasing renewal of nature we discern the hope of a resurrection. 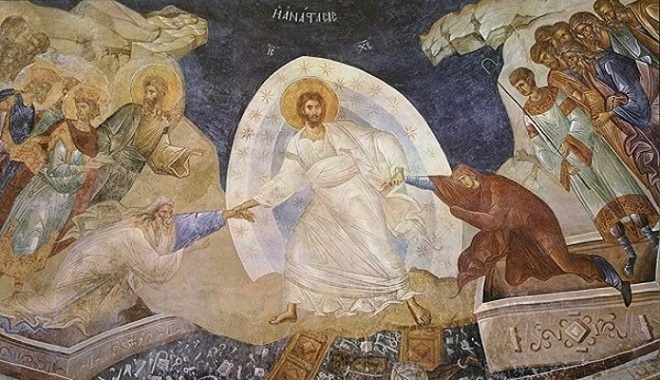 In olden days, the belief in some form of life after death moderated somewhat the magnitude of the threat of death. People in the Modern era, however, wanted to restrict or even, as far as possible, to completely do away with the threat of death by faith in unlimited scientific and technological progress. But it wasn’t long before this also proved to be utopian. So it is that, in our own day and age, we’re more exposed to pessimism than at any previous time, despite the inconceivable advances in science and technology.

A quick review of ancient Greek thought and life is sufficient for us to ascertain that belief in the immortality of the soul was widespread, or even, as Plato taught, that the body was the prison or tomb of the soul (body/sepulcher) and that death is a blessing because it liberates the soul from its incarceration. Moreover, Epicurus wished to free people from the fear of death with the following saying: ‘Death’, he said, ‘is the most terrible of evils’. But it doesn’t affect us, because, ‘where we are, death doesn’t appear and where death appears, we aren’t’.

A rather more profound reflection on death and life after death is to be found in the tragic poet Euripides. ‘Who knows’, he said, ‘whether dying is life or living death’. But there are many people, even today, who have no particular connection with the Church or religion who talk about real life and phony existence. This life, they say, is illusory and ends quickly. True life is eternal.

If you look back on the life you’ve lived, you’ll see that, however many years it’s measured in terms of longevity, it still seems very brief. However many years you’ve lived, they flew past. And the older you get, the quicker the years seem to pass. We often say that they seem to pass as in a dream. And there’s more than a grain of truth in this. A dream is itself a form of life, sometimes a very intense one. But when we wake up to our normal life we realize that it was a dream, an illusion.

What Euripides posed as a question, what is formed and expressed as a suspicion in the common mind with the changes that take place in life and time, and, finally, what exists as an innermost desire in people’s hearts and is an ontological characteristic of life itself, receives its definitive answer in Christianity, with Christ’s resurrection from the dead.

Christ’s resurrection isn’t some miraculous event in his life. It’s not a personal occurrence with no further reverberations for humanity. There were other occasions mentioned in Holy Scripture when the dead were raised. Lazarus was raised after he’d been dead for four days. Others were raised by Christ and his Apostles. But they all died again and were buried. Christ rose and entered eternity, renewing the whole of the human race and leading it into eternity through his hypostasis: ‘Christ effected the renewal of our nature in his hypostasis’ (Isaac the Syrian, Epistle 4).

Christ’s resurrection is of paramount importance for us. What Christ did and what he suffered, he did and suffered for humankind, fulfilling ‘the dispensation arranged for us’ and, at the same time, showing the path each of us should walk in our life. He wasn’t sacrificed so that we could be inactive, accepting salvation passively, but so that we, too, could follow the same course, imitating his example and observing his commandments. And apart from humanity, the whole of the world, which is suffering with us, was also included and renewed in the hypostasis of Christ, by the grace of the Holy Spirit.  (Cf. Rom. 8, 17 ff.; 2 Cor. 5, 17).