In truth, how could this have happened? Is it ever possible for steadfast faith to arise out of disbelief? Someone will be quick to say that ‘All things are possible to those who believe’. But Thomas is described as a doubter, not a believer, at least until he had the proof he sought. Someone else might say: ‘All things are possible to the Lord who works for the salvation of humankind’, and this answer is more to the point.

Indeed, the Lord works on the basis of a plan for the benefit of our salvation. When he appeared to the disciples, ‘The doors being shut… by divine dispensation, Thomas was not then with them’. (Verse at ‘Lord I have cried’, Great Vespers, Saturday before Thomas Sunday). 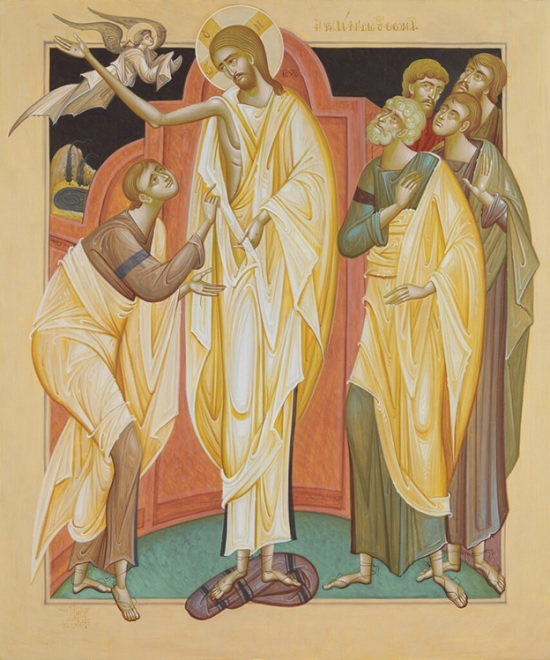 So Thomas’ disbelief gave rise to certain faith. In his own way, Thomas ‘theologized’, ‘he recognized the incarnate Son and Word of God as having suffered in the flesh and proclaimed the Risen God’ (Vespers, Wednesday after Thomas Sunday).

Indeed, he who dared to ask for proof for his ‘disbelieving belief’ became one of the most zealous preachers of the Gospel, in far-off India, moreover. How could he have preached to people about the wonders he seen when he was with his Master, how could he persuade unbelievers to believe if he hadn’t first been convinced himself?

This is why the good Lord showed such indulgence towards the ‘good disbelief’ of Thomas, and not only allowed him to satisfy his curiosity but even encouraged him: ‘Come and touch my hands and feet and my pure* side’ (Matins, Thomas Saturday, Lauds).

Such was the magnitude of his love for us that he, ‘the subject of their attentions consented to be struck by the Jews, touched by the disciples and set aside’ (Vespers, Thomas Sunday, Apostikha). The Lord wasn’t humiliated, nor was he outraged when others were concerned about him, even though they held him in disregard.  Quite the opposite, in fact. The fact that they bothered about him, ‘on many sides and in many ways’ is proof positive that they actually recognized his worth, even though they themselves were unwilling to admit it.

In the end, it seems that Thomas didn’t need to touch the Lord, even though Christ himself invited him to: ‘Touch, if you will’. He who healed  the bodies and souls of others now stood before Thomas, bearing the raw and indelible marks of the Cross and, at the same time, the credentials of his Resurrection. Thomas needed no further proof. His confession ‘My Lord and my God’ was tantamount to admission that he recognized that the Lord had risen. This is why the Lord ‘was pleased to be investigated’, because he knew that investigating him brings us to faith and to ‘eternal life’ (Jn. 5, 31 and 39). In this way, he asks of us what he asks of Thomas: ‘Do not doubt, but believe. And also trust the others’.

In other words, he doesn’t merely ask us to believe,  but calls upon us to go a step further: ‘to trust the others’, to enter into a company of brothers and sisters, all of whom share the characteristic of faith in the same Lord, Christ our Savior who took flesh, suffered, was buried, and rose.

This explains why the Lord invites us to join this group of recognized, believing brothers and sisters. Because he surely knows that, if we’re alone, as Thomas was, our doubts will increase and the more they do, the more we’ll worry and become distressed as Thomas did when he was isolated from the others. But if we’re ‘eleven’ rather than ‘one’, it’s easier to support each other in our faith.

May he ‘who trampled down death and instructed Thomas’, guide us, also,  in our quest for him and may he strengthen our faith. Lord, glory to you.

* This is a very bold choice of word on the part of the hymn-writer. The Greek word (ἀκήρατον) derives from two different verbs and therefore has two different meanings. The first meant ‘untroubled’, then ‘untouched’, then ‘whole’, then ‘pure’. The second meant ‘unmixed’, that is wine without water added, then ‘pure’. In the Gospel passage, Christ’s side was, indeed, ‘untouched’ until Thomas investigated it; and, indeed, ‘unmixed’, since both blood and water flowed separately from it [WJL].