Saint John Chrysostom: The Sunday of the Blind Man 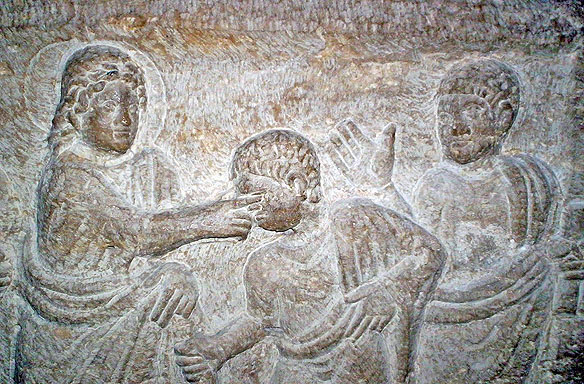 And as Jesus passed by, He saw a man who was blind from birth. And His disciples asked Him, saying, Master, who sinned, this man, or his parents, that he was born blind?

1.  ‘And as Jesus passed by, He saw a man who was blind from birth’. Being full of love for us and caring for our salvation, and desiring to stop the mouths of the ungrateful, He overlooks nothing that is His to do, even if there’s no-one to pay attention. The Prophet knew this when he said: ‘that you might be justified in your words and prevail when you are judged’. So here, too, when they wouldn’t accept the sublime meaning of His words, but said that He had a devil, and attempted to kill Him, He left the Temple and healed a blind man, placating their anger by His absence, and, through the miracle, softening their hardness and cruelty, making them believers in His words. And He performed a sign which was not adventitious, but one which took place then for the first time: ‘never since the world began has it been heard that someone opened the eyes of a person born blind’. Someone may, perhaps, have opened the eyes of a blind person, but not of anyone blind from birth. And that He fully intended to do this when He left the Temple is clear from the following: it was He who saw the blind man, not the blind man who came to Him. And He looked at him so pointedly that His disciples noticed. And they came to question Him, because when they saw Him regarding the man so earnestly, they asked Him, ‘Who sinned, this man, or his parents?’ Wrong question. How could he sin before he was born? And why, if his parents had sinned, would he have been punished? Why, then, did they put this question? Before, when He healed the paralytic, He said, ‘Look, you’ve been made well, sin no more’. Now they understood this to mean that he was paralyzed through sins and said, ‘Well, that man was paralyzed because of his sins; but what would you say about this one? Has he sinned? You can’t say that, since he’s been blind from birth. Did his parents sin? You can’t say that either, because a child doesn’t suffer punishment for its father’. Just as, when we see a child that’s been badly treated, we might say, ‘What can you say? What’s the child done?’ It’s not so much a question as bafflement. The same is true of the disciples here: they weren’t asking for information, but rather they were perplexed. What then does Christ say?

Neither this man has sinned, nor his parents.

He doesn’t say this as if He’s acquitting them of sins, (because He doesn’t say simply, ‘Neither has this man sinned, nor his parents’, but adds, ‘for him to have been born blind’) but ‘so that the Son of God should be glorified in him’. Both this man and his parents had sinned, but this wasn’t the cause of his blindness. Now he said this not merely to show that this man was not such a case nor that others had been made blind for such a reason (the sins of their parents,) but to demonstrate that it can’t be the case that when one person sins another should be punished. If we allow this, we must, of necessity, concede that he sinned before he was born. So when He said, ‘neither this man has sinned’, He means that it’s not possible to sin from birth and be punished for it; and when He said, ‘nor his parents’, He meant that a person can’t be punished because of their parents. He removes any suspicion of this through Ezekiel: ‘As I live’, says the Lord, ‘this proverb shall not be used, “The fathers have eaten sour grapes, and the children’s teeth are set on edge”’. And Moses says: ‘The father shall not die for the child’. And of a certain king Scripture says, that, for this very reason, he didn’t do this thing, but observed the law of Moses. But if anyone says, ‘Why is it said, then, “Who visits the sins of the parents upon the children unto the third and fourth generation?”’, we should answer, that the assertion isn’t universal, but that it was spoken with reference to some of those who came out of Egypt. And what it means is that, since those who came out of Egypt, after signs and wonders [had been given], were actually worse than their forefathers who hadn’t seen any of these things, they would also suffer what their forebears did, because they dared to commit the same crimes. And if you pay attention to that passage you’ll see that it was certainly written about those people in particular.

Why then was he born blind? That the glory of God should be made manifest.

Here we have another difficulty: was it not possible for the glory of God to be shown except through this man’s punishment? Certainly it’s not said that it was impossible, because it would have been, but ‘that it might be manifested in this man’. You might say, ‘So did he suffer wrong for the glory of God?’ What wrong, tell me? What if God had never willed him into existence at all? But I would say that he even received benefit from his blindness, since he saw with his inner eyes. How did the Jews profit from their eyes? They incurred heavier punishment, since they were blind even while they saw. How did he suffer from his blindness? Because of it he recovered his sight. The evils of the present life aren’t evils (and neither are the good things good); sin alone is evil, but blindness isn’t an evil.  And He who had brought this man from not being into being, also had the power to leave him as he was.

But there are those who say that this phrase [That the glory of God should be made manifest] isn’t causative, but expresses the consequence of the miracle; as when He says, ‘I came into this world for judgement, so that they who do not see may see, and that they who see might be made blind’. Yet it wasn’t for this that He came- that those who saw might be made blind. Again Paul says, ‘because that which may be known of God is manifested in them, that they may be without excuse’. But He didn’t show them in order to deprive them of an excuse, but so that they might obtain an excuse. And again, in another place, he says ‘the Law entered, so that the offence might abound’; but it wasn’t for this that it entered, but that sin might be checked. Do you see that in all these cases the proposition defines the outcome? Just as an excellent builder might construct part of a house, and leave the rest unfinished so that he can prove to doubters that he really was creator of the whole, so God also joins together and completes our body, as if it were a dilapidated house: healing the withered hand, bracing paralyzed limbs, straightening the lame, cleansing the lepers, raising up the sick, making cripples well, recalling the dead from death, opening eyes that were closed, or adding them for those who had none. By correcting all of these things, which are blemishes arising from the infirmity of our nature, He showed His power.