The resurrection and entry into the eternal life of the Kingdom of the Triune God are not abstract ideological matters. They are truths and circumstances which came into the world with the advent of Christ and can be approached empirically (Cf. 1. Cor. 13, 12). Indeed, this approach is proposed to every person who is of a mind to observe Christ’s commandments (Cf. John 7, 17). It is important to note, however, that, as Saint Sophrony says that ‘after his resurrection, Christ appeared exclusively to those who were capable of recognizing him in his already deified and shining flesh, while he remained invisible to the rest’ (We shall see him as he is).

The resurrection and eternal life are, in the end, Christ himself (Cf. John 11, 25). He is the ‘first-born of the dead’ and ‘the land of the living’. In the Holy Spirit, he takes every believer into his body as a special, unique person within the community of the glorified. And believers, as sharers in the ‘first-born of the dead’ and as citizens of the community of the glorified, can promise ‘eternal memory’ to their departed fellows. 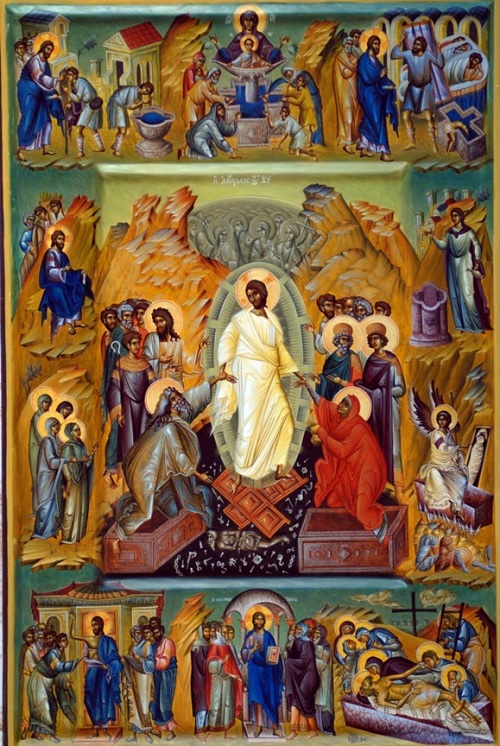 Through love we are able to experience a foretaste of the resurrection. The Apostle and Evangelist, Saint John the Theologian, writes: ‘We know that we have passed from death to life, because we love each other’ ( 1 John 3, 14). Awareness of the transition from death to life is clearly in the nature of something experienced. It is an experience of love among brothers and sisters which opens up to us the prospect of eternity. It opens the prospect of existential knowledge which extends beyond our immediate perceptions. Real Christians do not believe but know through direct personal experience (‘we know’) that they have passed from death into life. Their prime mission in the world is not only to declare but also to witness to the world their certainty concerning this transition, concerning the resurrection.

The certainty of the resurrection which is founded on love, releases people from the fear of death and offers unlimited freedom. It has been aptly noted that where there is no love and freedom, everything loses its meaning. Real knowledge becomes mingled with love, when we offer ourselves to Christ and to others and bring them into ourselves. In this way we are freed from our egocentrism and we find our true selves in the persons of other people. In the final analysis, love is all of us ‘fitting in together’ in the body of the risen Christ. It is the triumph of the love of Christ, which is won through the most difficult and painful struggle (Saint Sophrony op. cit.). It is the experience of the general resurrection.

Love as ‘fitting into’ the body of Christ is an eschatological experience or an experience of the last days. And the last days are not limited to the end of history, the final days, but to ‘unshakeable’ finality, conclusiveness (Cf. Heb. 12, 28). They are what will always continue to exist. Here the end is not some historical time, but unshakeable eternity. This is not limited in terms of time, but surpasses, and at the same time infuses, time and history. It is the transcendence of and liberation from the exigencies of time and history.

God is love (Cf. 1 John 4, 16). And we people are created in the ‘image and likeness’ of the God of love. Love resurrects and liberates, whereas hatred enslaves and deadens. But the God of love is also just. He respects our freedom and doesn’t deal with us through his might, but through his justice. In this way, we are free to accept or reject communion with him. This is what he did from the beginning and what he continued to do after our fall, through the work he did for our salvation. This is why he became a human person and was crucified for us. His power was manifested  after his death with his resurrection. Saint Gregory Palamas says that this is the perfect order which God follows in his work. This is also the order which people are called upon to follow in their earthly life so that they can retain it eternally when they receive the power in the time of their immortality (Homily16, 2-3).

The desire for eternity is expressed in many ways in human life. This transient life is a preparatory stage and a precursor of eternal life. Human life without the prospect of eternity is absurd. If human life ended with our death, it would be absurd and would make the universally accepted rationality of the cosmos absurd, too. Since the cosmos is testimony to rationality, this means that its provenance is rational and is designed for rational beings who have the wherewithal to grasp its rationality. We were not created to die, but to live eternally. And the cosmos was not created to be destroyed, but to fulfil a task which is linked to humankind. We are not merely ‘microcosms’, but, according to Christian teaching, we are a second cosmos ‘great in littleness’ (Gregory the Theologian, Discourse 38, 11). Humankind encapsulates the whole of the cosmos and comprehends its rationality.

As has been aptly noted, ‘the rationality of the universe, considered unique, has led many modern writers and intellectuals to the point of considering the universe, which brings every person to death, as a gigantic necropolis, a universe of absurdity, of lack of meaning, of “irrational rationality”’ (Fr. Dumitru Staniloae, Introduction to Orthodox Dogmatic Theology). With his words, the Word of God, who is the Creator of the universe, addresses rational beings, humankind, and invites them into communion and free dialogue.