The event of Christ’s Descent from the Cross and Burial is odd and praiseworthy, because it was  not looked after by His Disciples, but by two counsellors of the High Court of the Jewish nation, Joseph of Arimathaea and Nicodemus.  The Apostle St. Peter was still in tears for his denial and  the rest of the Apostles were scattered, as was foretold by their Teacher, “I will smite the shepherd, and the sheep of the flock shall be scattered abroad” (Matth. 26:31).

According to the Jewish law, “cursed is every one that is hanged on a tree” “(Gal. 3: 13).  The two counsellors of the High Court, moved by their philanthropic feelings for the crucified and abandoned – by – all Teacher of Nazareth, and because of their personal characters, showed readiness and courage to carry out the task. Great courage and boldness, because it was a dangerous and  serious request,  was required, to ask to bury the body of a person who just died and who was condemned officially by the official Roman Government. 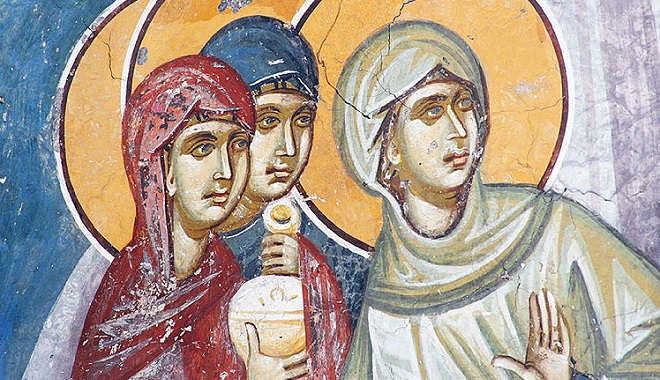 The name Jesus, itself, the reason of His condemnation and the way it was carried out, justify St. Mark, the Evangelist, using the term “courage”, to describe the courage of St. Joseph of Arimathaea.  Jesus was a deadly enemy of the Pharisees, Scribes and Saddoucees.  He was condemned by the High Court of the Temple, as a blasphemer of God and an enemy of the Mosaic Law and the Jewish nation.  He was sentenced to death as a traitor, as a revolutionary who attempted to stir up a revolution against the Roman suzerainty. Finally, He was condemned, because He was accused of being ambitious of kingship, an act which made Him an enemy of the Roman Emperor.

Great courage was required in order to appear before the local Governor and ask to bury, with honour, the body of such a man.  The fierce crowd, the fanatic archpriests, the members of the High Court, Saddoucees, Pharisees, Scribes and Pilate’s attitude, who in public officially condemned Jesus, were the great obstacles which Joseph of Arimathaea had to surpass.

Joseph, “being a disciple of Jesus”, but, as with many others counsellors, “for the fear of the Jews” (John 19: 37) remained in secret. Because of the fear not to be cast out of the Synagogue, Joseph of Arimathaea and Nicodemus with whom Christ spoke about the spiritual renewal and salvation which men will achieve, through the Holy Sacrament of Baptism, the basis and assumption to inherit God’s Kingdom.

Two counsellors, who opposed the unjust and inhuman decision  of the High Court of the Temple, by which Jesus was condemned, now co-operate for the descending from the Cross and the burial of the Just Teacher of Nazareth, Whom the centurion (St. Longinus) proclaimed as “the Son of God” (Matth. 27:54).  Their spiritual pain led them to express their love and respect, which they had for Jesus.

Joseph took the body of Jesus down from the Cross, and wrapped it in a clean linen cloth, as  was the  custom amongst the Jews.  “And he laid it in his own new tomb, which he had hewn out in the rock: and he rolled a great stone to the door of the sepulchre and departed” (Matth. 27:60).

Our Orthodox Church reminds us today about the heroic and courageous deed of St. Joseph of Arimathaia and Nicodemus.  Let us imitate their faith and life.  Today, we who live in a society with few Orthodox, ought to confess our Orthodox Faith with courage, withou any hesitation and fears.  We must always have in our minds the words of our Lord, who says: “Whosoever shall confess me before men, I will confess him also before my Father who is in heaven.  But whosoever shall deny me before men, I will also deny him before my Father who  is in heaven.” (Matth. l0: 32-33).