Who’s to Blame? (Sunday of the Blind Man)

‘And his disciples asked him, Teacher, who was to blame, he himself or his parents, that he was born blind?’ (Jn. 9, 2). A little earlier the Lord had cured the paralytic at the Pool of Bethesda and had said to him: ‘Go and sin no more, lest worse befall you’. (Jn. 5, 14). It’s clear from Christ’s words that the latter, who had been crippled for so many years, was himself to blame for his sickness. The case of the man who was born blind, however, was not so clear and this is why His disciples asked ‘Who sinned?’.

The fact that God sometimes allows offspring to suffer for the sins of their parents had been clarified already in Holy Scripture (1 Kings 11, 12; 21, 29). This may seem unfair, but only to those who are accustomed to seeing people as separate entities, as though we’re all completely cut off from each other. But if you think of the human race as an organism, you won’t consider this either unjust or unnatural. 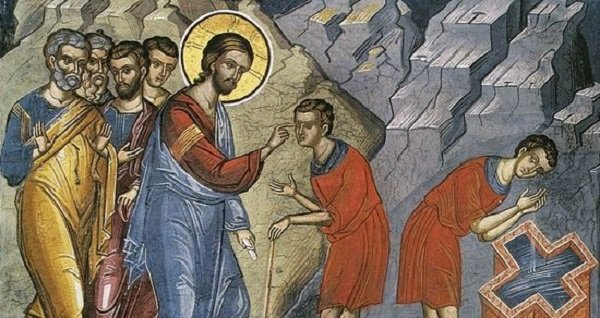 When a sinful member is injured, the other members, who haven’t sinned, also suffer. It’s much more difficult to explain how and when the man who was born blind might have sinned than it is to determine the cause of his blindness. As simple people, the disciples accepted the second version, without pausing to consider the third possibility. It seemed to them most likely that the man’s parents had sinned. But they remembered the words Christ had spoken to the paralytic (‘Sin no more’) and in some way connected the one instance with the other. It’s as if they were saying: ‘It was clear to us then, from your own words, that the man brought his illness upon himself. But can the same be true in this case? Did this blind person sin himself, or was it his parents who did so?’

If, at that moment, the Lord had asked His disciples the question ‘Who do you think might have sinned so that he was born blind?’, they’d have been at a loss for an answer. In the last resort, they may have cited the common sin of the human race after the sin of Adam. As the palmist says: ‘For behold I was conceived in transgressions and in sins did my mother bear me’ (Ps. 50, 5).

The chance they would have referred to the thinking of some of the Scribes and Pharisees, that the soul of the person had inhabited another body before he was born and that, in that in a previous life he’d lived in such a way that he fully deserved to be repaid or punished in this life is very small. This is a philosophical tenet which the simple and faithful Galilean fisherman would not have been aware of.

The wise teacher answered the disciples’ question: ‘Neither this man nor his parents sinned; he was born blind so that God’s works might be revealed in him’ (Jn. 9, 2). Or, as Saint John Chrysostom puts it: ‘whether he or his parents sinned isn’t the cause of blindness here’. 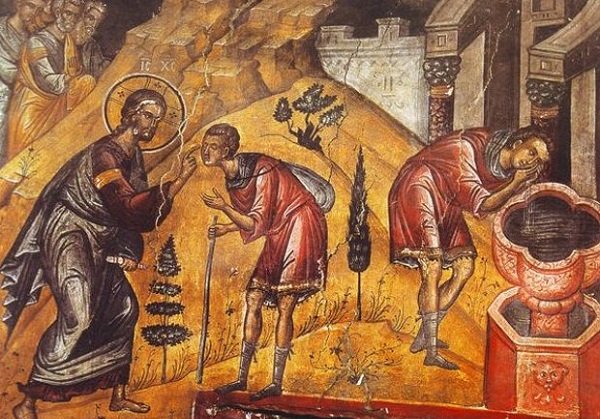 Regarding the torments and sicknesses which beset people on earth, there may be other causes, apart from the sins of the people themselves or their parents. In the case of the man who was born blind, the cause was ‘so that God’s works might be revealed in him’.

Blessed are they in whom the works of God are made manifest, which works He uses for the salvation of their soul. Blessed are those who, when they’re poor, are made rich and famous by God’s providence, and then continue to recognize and welcome His providence in gratitude. Blessed also is the hopelessly crippled person to whom God gives his or her health and they raise their heart to the invisible God, their only Benefactor.

How invisible are the works of God within each of us every day. What joy they all feel who, through God’s works within them have had their spiritual vision opened to the point where they can gaze on God. Woe betide those who, even though they have in their hands abundant gifts from God, turn their backs on Him and continue along their dark and aimless paths, as if they were blind. The works of God are manifested in all of us, every day, because God is with us every day and hour of our life on earth.

The works of God are for the salvation each person separately. But the works of God in the man blind from birth contribute to the salvation of many. These works revealed that God really did come down to earth and lived amongst us. These works reveal that there are more among us who are spiritually blind than there are bodily. These works also demonstrate that if you’re sensible and you’ve been given physical gifts by God, you’ll use them to enrich your soul with true faith.

Bearing in mind all the fruits of the cure of the man who had been blind from birth, the Lord said with satisfaction to His disciples: ‘Neither this man nor his parents sinned; he was born blind so that God’s works might be revealed in him’. As though he wanted to say: ‘Leave aside your question about who was to blame, the man himself or his father. It’s not worth bothering about at this moment in time. If he and his parents sinned, I can, here and now, forgive them, and take the sin upon Myself and declare them innocent. All of this is subsidiary to what is going to be revealed. The works of God (not one but many) will be revealed in this person and the event will be recorded in the Gospel, so that it will contribute to the salvation of many’.

Indeed, the man who was born blind will compensated a hundredfold for the years he suffered. And the reward that God gives to those who have suffered for His sake are eternal and imperishable. Nikiforos, a wise commentator on the Gospels, says about the man who was born blind: ‘The man who was born blind, who had no idea what ‘sight’ means, would have felt less concerned than someone who had  once been able to see and then couldn’t. He was blind and was later recompensed for this slight and almost insignificant sorrow. And he was given double sight: on the one hand, the physical, with which he was able to see and admire the visible world around him; and on the other the spiritual, with which he recognized and confessed the Creator of the world’.