All Saints: our luminous signposts

On the first Sunday after Pentecost, the Church honors All the Saints, the bright stars in the spiritual firmament, as instruments of the Spirit and the first fruits of his grace. These are saints of all categories and ages, famous and anonymous, prominent and obscure, men and women, who were illumined and sanctified by the Holy Spirit and were pleasing to God because ‘they fulfilled the words of the Savior in deeds’.

Saint Nikodimos the Athonite calls All the Saints offshoots of the Gospel and imperishable fruits, while Kyrillos of Constantinople compares them to the heavens, where Christ shines in the middle, as the Sun, Our Most Holy Lady is the moon, and, ‘in a circle’, like shining stars, are the choirs of all the saints. This cyclical choir remains open, so that anyone who wishes can ‘enter into all the saints’ (synaxari for the feast). And the only thing the saints did was follow the Lord’s exhortation: ‘Become holy, for I am holy’ (1 Peter 1, 16). Indeed, strengthened ‘by faith’, they ‘conquered kingdoms’, stopped the mouths of lions, and quenched the fury of the flames…They were tortured on an instrument called the drum… They were stoned to death, they were sawn (Heb. 11, 33-37). They suffered all manner of hardships in order to gain God’s promise of eternal life. 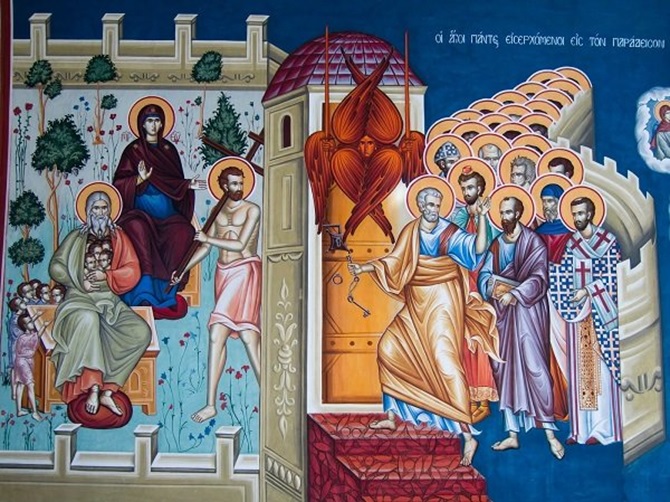 And let’s not inquire about the way in which these formerly simple and ordinary people, who were entirely similar to us as regards nature, were able to find the spiritual and bodily strength to carry out such great feats. The answer is clear: they fought and died ‘by faith’.

In the beginning, faith set fire to the hearts of the ‘unlearned fishermen’, the Lord’s disciples, so that they could become apostles and preachers of his Gospel to the ends of the earth. They, in turn, sowed his word, which grew ‘by divine husbandry and grace’ and created the hosts of holy martyrs and confessors who, alight with the flame of divine love torched the mockeries of the idols and dispelled the darkness of delusion, shedding the light of Christ throughout the earth.

‘By faith they administered justice… turned weakness into strength’ (ibid.) so that they were victorious in wars and, though formerly weak, then became strong in the Lord and put their enemies to flight. But they accomplished all this for another reason, as well: ‘the world was not worthy of them’. In other words, they didn’t deign to exchange the love of Christ and the promise of eternal life for all the honors and offices of this world. This is why, in the future life, the Lord has reserved for them an unfading garland, for their testimony to the faith.

This is precisely where the grandeur of All the Saints resides, as does the Lord’s great patience. They haven’t hastened to harvest the fruits of their suffering, and to taste bliss, as it might be reasonable to expect. Nor does our most merciful Lord wish them to enjoy the rich blessings of his kingdom on their own. ‘God has planned something better for us, so that only together with us can they be made perfect’ (ibid. 40).Moreover, God ‘wants all people to be saved’, and is waiting patiently for as many as possible to be numbered among open choir of his saints.

Given this honor accorded us by our good God and the saints, it would normally be expected for us all to make it a matter of honor to fight the fight before us willingly. If we don’t do so, that means that either we’re lacking in faith or that we prefer worldly honors to the love of the Lord. Or both.

In either case, we deserve all we get. We don’t resemble in the slightest our recognized All Saints, and actually disdain them, in effect, with our hypocritical attitude. On the one hand, we claim to honor them, but on the other we offer greater honors to every kind of ‘saint’ in this world, whom we literally worship and follow blindly in whatever they tell us. We trust them even when they let us down and prove to be unworthy of our confidence. Even then we’re prepared to obey them willingly.

There really is so much confusion these days, the darkness is so deep, the activities of the forces of evil are so well organized and so mutually supportive, while the fragmentation and lack of communication of the forces of good are so extensive, that it seems almost impossible to react against and resist the absolute control of the former.

In truth, what do we have with which to counter these apparently invincible, God-opposing and inhumane forces which are striving with might and main to crush us? Our admittedly weak faith, which, however, becomes strong when we ask for support from the mighty Lord. It was he who gave strength to those who had been weak; who, thereafter, gave strength to All the Saints so that they could miraculously face their adversaries and overcome them.

He continues to reveal saints all the time, even in our own days, who illumine and strengthen us, so that ‘destitute, persecuted and mistreated’ though we are, we can bear today’s sufferings, provided we confess with faith.

At the same time let’s not neglect to fight resolutely the good fight of faith ‘with fortitude’. Let’s keep our eyes fixed on the Lord the perfecter and those perfected in him, his worthy witnesses and our luminous signposts, All the Saints. By their grace may we always be enlightened and may we be allowed to mingle with them in God’s eternal kingdom. Amen.