‘We celebrate Pentecost and the visitation of the Spirit, the time appointed for the promise and the fulfillment of hope. How great is this mystery? It is both vast and most venerable. Therefore, we cry to you, Creator of all, Lord, glory to you’.

The Church places this wonderful hymn at the threshold of the feast of Pentecost. It is an encapsulation of the ‘vast and most venerable’ mystery we celebrate on that day: the fulfillment of hope, the time appointed for the promise and the descent of the Holy Spirit. Because, indeed, the event we celebrate, the breathing of the Holy Spirit on Christ’s Apostles represents the culmination of the whole task of salvation. All the activity of Christ- His advent, teaching, passion, resurrection and ascension- was directed to this: the descent of the Holy Spirit into the world, and the new creation. It’s for precisely this reason that, in the above tropario, and in all the hymns of Pentecost, the Father is hymned as the creator of all, Who through the Word, the Son of His love, created the world in the Holy Spirit. And now he re-creates it, rebuilds nature, changes it into something new, renovates it. 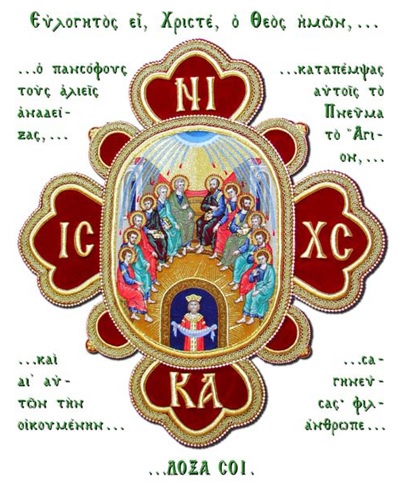 Blessed are You, Christ our God, who made the fishermen all-wise, sending down upon them the Holy Spirit and, through them, netting the world. Loving One, glory to You*.

So this day combines the commemoration of the birthday of the new world with that of the old. Two births, the natural and the supernatural. We’re taken back to the former by the first verses in the Bible: ‘Now the earth was formless and empty, darkness was over the surface of the abyss, and the Spirit of God hovered over the waters. And God said, “Let there be light, and there was light. God saw that the light was good’” (Gen. 1, 2-4). At the second birth, the same thing happens. Over the formless material of the pagans and the darkness of delusion, the powerful breath of the Spirit of God was exhaled. His word renewed outworn creation. ‘Parthians and Medes and Elamites and residents of Mesopotamia, Judea and Cappadocia, Pontus and Asia, Phrygia and Pamphylia, Egypt and the parts of Libya belonging to Cyrene… Romans, both Jews and proselytes, Cretans and Arabians’ (Acts 2, 9-11), are the new abyss, the spawn of dispersal, of division and the disintegration of the world. Above them now hovers the Spirit of God and His Word calls all of them to harmony, to the unity of the Holy Spirit, to the light. He ‘Who commanded light to shine from the darkness’ (2 Cor. 4, 6), calls upon them ‘to return from darkness to light (Acts 26, 18), to become ‘light in the Lord’ (Eph. 5, 8). And the re-casting occurs through the fiery tongues of the Holy Spirit, which were distributed among the Apostles: ‘And there appeared to them tongues as of fire, distributed and resting on each one of them’ (Acts, 2, 3). Language, the symbol, the result and the cause of division now becomes a symbol of unity, a symbol of the unity of the new people of God in the Holy Spirit. The inauguration of the Spirit is symbolized by the renewal of languages. Through Christ, in the Holy Spirit, the mystery of eternal salvation was now being told. It is precisely this that the second hymn [stikhiro] at Vespers for Pentecost (tone 1) underlines:

‘You have renewed your disciples with the tongues of other nations, Christ, so that they may, through them, proclaim You as the immortal Word and God, Who grants great mercy to our souls’.

The people of God, then, that is the Church, celebrates its birth at Pentecost. Its birthday, but also the mystery if its life itself. Because the Church of Christ didn’t experience the mystery of Pentecost at a particular moment in that blessed year and on that historic day when the disciples were ‘filled with the Holy Spirit’. It has continued to experience it on a daily basis, continuously, at every moment in time and will do so until the completion of the age. Because the Holy Spirit came into the world then, has remained ever since and will continue to do so until the end of the age, in order to maintain the Church. Spirit and Church are inseparably united. The Holy Spirit is the soul, the life and the being of the Church, of its new life in the Holy Spirit. To Him is due the unity, the sanctity and the universality [‘catholicity’] of the Church. From Him spring the gifts, the institutions, the faith and the theology of the Church. His powerful breath and His fiery dew are felt in the Church’s every step, its every function, every movement it makes. From Him flow the supernatural energies of the sacraments that breathe life, into, nourish and sanctify its body. This is the theology expressed by the poet in the third stikhiro at Vespers:

‘The Holy Spirit provides all things. He issues prophecy. He perfects the priests. He has taught wisdom to the illiterate. He has elevated the fishermen to be theologians. He has brought about the whole institution of the Church. Glory to You, Comforter, Who are one in essence and throne with the Father and the Son’.

On the anniversary of the event, the Church takes us to the historical Pentecost and also the continuous one, in which it lives. It invites us to bend our knees in the courts of the Lord, to make obeisance to His invincible power, and to glorify the Holy Trinity, which illumines and sanctifies our souls. And in this posture of humility, of bending the knee and neck, we’re invited to receive the grace of the Comforter. To renew and rekindle the flame of the Holy Spirit. To recognize our position and our capacity as members of the Church, as temples of the Holy Spirit. As pure temples and vessels, receptacles of the Comforter, whose every thought will be dictated by the Spirit of instruction, Who is good, upright, mystical, wielding power and expunging transgressions. The Holy Spirit, the Lord, the Giver of Life, the Deity Who deifies us, Who, through His grace, makes us ‘Gods by participation’.

This supernatural event, the descent of the Comforter is described in three wonderful troparia at Lauds at Vespers (in tone 4). They praise the Spirit Himself, and invoke His grace in the doxastiko in plagal tone 2 [tone 6].

‘Today all the nations beheld strange things in the city of David, when the Holy Spirit descended in fiery tongues, as Luke, the herald of things divine, declared. For he said: “As the disciples of Christ were gathered together, there came a sound as of a mighty wind, and it filled the house where they were sitting”. And they all began to speak, in strange [or ‘foreign’] words, in strange dogmas, in strange teachings, from the Holy Trinity’.

‘The Holy Spirit has, indeed, always been, and is, and shall be, neither beginning nor ceasing, but ever ranked and numbered with the Father and the Son. He is life, and life-creating; light, and light-bestowing; by nature good, and the source of goodness. Through Him the Father is known, and the Son is glorified and He is acknowledged by all as one power, one order of rank, one veneration of the Holy Trinity’.

‘The Holy Spirit is light and life and a living, mystical fount, the Spirit of wisdom, the Spirit of understanding, good, upright, mystical, presiding over us and purging offenses, Deity and deifier. He is fire as the outcome of fire, speaking, working, distributing gifts. Through Whom all the Prophets, the Apostles of God and the Martyrs were crowned. A strange report, a strange sight: fire dividing so that these gifts may be apportioned’.

‘Heavenly King, Comforter, the Spirit of Truth, Who are in all places and fill all things, the treasury of good things and giver of life, come and abide in us. Cleanse us from all impurity and, Good One, save our souls’.

* The translation of the texts is deliberately literal, rather than liturgical, because of Prof. Foundoulis’ commentary [W.J.L].