Peter and Paul, first among the Apostles

Just consider. What was Peter previously? A fisherman. All he knew was how to fish, how to catch fish in his nets in Lake Galilee. And then all at once, we see him preaching to the whole world. His words were so sweet and full of grace that, at one of his sermons, three thousand people adopted the faith and, on another occasion, five thousand did so, all of whom he baptized. 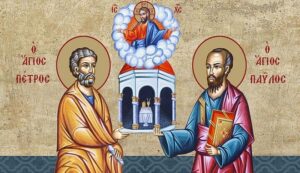 Fearless and undaunted, he stood before kings and tyrants, teaching and chastising, resolute in the face of threats and dangers. Tirelessly and with a will, although he was no longer a young man, he began preaching in Jerusalem, then travelled quickly throughout Judea, Antioch, the Black Sea region, Galatia, Bithynia and Cappadocia, Europe and Asia. In Rome he was martyred for Christ, under Nero, being crucified upside down.

And what was Saint Paul? A tent-maker. He’d previously been a persecutor of Christians. As he was going to Damascus, with authority to act against Christians, a light suddenly appeared above him, blinding the eyes of his body and he heard a voice saying: ‘Saul, Saul, why do you persecute me?’. In terror and wonder Paul said: ‘Who are you, sir?’. And he heard: ‘I am Jesus, whom you’re persecuting’. The Lord then told him to make his way to Damascus and to find the apostle Ananias. Once he’d been baptized, the eyes of his soul and body were opened and the former persecutor showed himself to be a great defender of Christianity.

Like a winged eagle he visited the whole of the known world, preaching the word of God and baptizing those who believed. In this apostle we see wonderful, marvelous things that surpass human power. This is why Saint John Chrysostom was right to declare in one of his sermons that: ‘Nor will another Paul be born’. His struggles and labors for the Gospel go beyond all human imagination. The dangers, sorrows, worries and other hardships he suffered are indescribable.

Just listen, in a few words, to the feats achieved by the first among the apostles. How were they able to perform such signs and wonders? By what means? By faith. Everything wonderful and marvelous performed by the holy apostles and the rest of the saints was achieved by faith.

What do I see, what do I hear among the uneducated, the villagers, the herders? Blasphemy, foul language and thieving. What do I see among the rich, the business people? Greed, rapacity and avarice. What do I see among the leaders? Egotism, arrogance, flattery, duplicity and deviousness. Among everyone, the laity and the clergy, you see neglect, sloth, corruption and paralysis. And then we expect prosperity, we expect wars, sorrows and misfortunes to end. I’ve said it before, I say it now and I’ll continue to say it: our hardships will end when we repent, when we become devout.