The Choir of the Fathers…

This Sunday, our holy Church honors the 318 God-bearing Fathers who attended the 1st  Ecumenical Synod [2] in Nicaea, Bithynia, in 325, and confessed the faith of the Prophets and Apostles.

This synod rejected the heresy of Arius and formulated the first part, the first 7 articles, of the Confession of the Faith  [the Creed] as the criterion of Orthodoxy. The second part, the remaining 5 articles referring to the Holy Spirit, the one, holy catholic and apostolic Church, baptism, the resurrection of the dead and eternal life were added and established at the 2nd Ecumenical Synod in 381 [3], called to meet in Constantinople by Theodosius the Great. 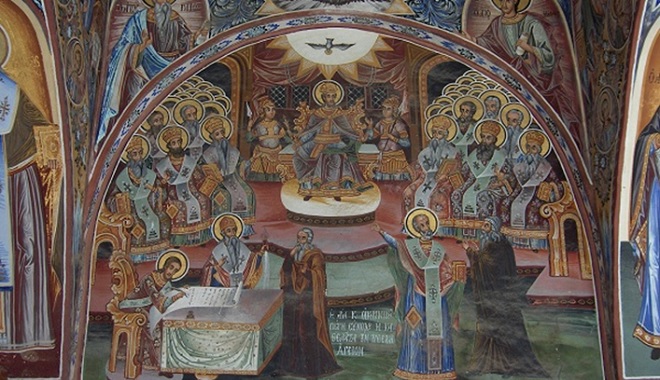 The Church owes a great deal to the Fathers, because, with their theological vision and holy life, they confirmed the faith and practice of the Church at a time of spiritual doubts and misgivings. As Saint Gregory the Theologian puts it: ‘They were first cleansed in order that they might cleanse; they became wise to make others wise; they became light in order to illumine, so that they might approach God and bring others to him; they were sanctified in order to sanctify, leading others by the hand, counseling with acumen’[4].

They theologized in accordance with the Apostles and Orthodoxy. By the grace of the Holy Spirit they interpreted the mystery of theology first by their example and then with their words. They spoke and wrote on the Trinitarian dogma, on the two natures of Christ- divine and human- and on the Mother of God. They set out and defended the correct faith, as this emerges from the words of Christ himself, which we read in the Gospels. These are that Jesus Christ is the incarnate Son and Word of God who suffered and rose for the salvation of the world. They fought for the truth; they fought. At the same time as defining the true faith, the Holy Fathers also preserved the unity of the Church, given that every heresy is  cause of division among the faithful, of the fragmentation of the very body of Christ, which is the Church.

The Fathers, the spiritual guides of the people of God, are the eternal teachers, the real, permanent shepherds, the genuine imitators of the Great Teacher and Chief Shepherd, who rightly divided the word of truth. This is why they fought, in this particular instance against the heresiarch Arius, but also against every heresy that appeared. They understood that those who aren’t united to the Church live in darkness and delusion.

What the Fathers who are honored today, and, indeed, all the Fathers of the Church, have left us as a legacy is that we should remain united with Christ and his Church. We’re therefore required to preserve the truth of the faith which the Fathers formulated and experienced in the Holy Spirit as the proper practice of experience.

[1] Doxastiko at Lauds on the Sunday of the Holy Fathers:

‘Let us acclaim and praise in faith the choir of the Holy Fathers who, gathered together from the ends of the earth, set forth the dogma of the Father, Son and Holy Spirit, one essence and nature, and marvelously transmitted the mystery of theology to the Church. Let us say: Divine intervention, God’s escort of consorts from the ranks of the Lord, bright-shining stars of the spiritual firmament, unassailable bastions of mystical Zion, fragrant blossoms of paradise, burnished-gold mouths of the Word, boast of Nicaea, pride of the world, pray fervently for our souls’.

[2] The dogmatic issue with which this synod was concerned was the heresy of Arius. Arius was a priest in the Church of Alexandria who had previously been condemned by a synod of the Church of Alexandria for his heresies regarding the divinity of Christ. But since his heretical views spread to other regions of the Roman Empire and were causing problems, Constantine the Great called the 1st Ecumenical Synod to resolve the problem.

[3] This synod was chaired by Saint Meletios, Archbishop of Antioch (12 February) and ,after his demise, by Saint Gregory the Theologian, Patriarch of Constantinople (25 January). Following his resignation, Saint Nektarios, Patriarch of Constantinople (11 October) took the chair. This synod condemned the heretics who didn’t accept the decisions of the 1st Ecumenical Synod, as well as other heresies which had appeared since, such as that of Apollinarius, the Pneumatomachians and so on.