The faith of both the paralytic and those who carried him (Matth. 9, 1-8) is really remarkable. Unable to help himself because of the nature of his illness, the man placed himself in the hands of his brethren and accepted their assistance with humility and aquiescence; and for their part they undertook not only to oblige him, but to overcome the practical obstacle of getting him to Christ. This was the size of the crowd, which they by-passed by coming up with idea of breaking open the roof of the house where Jesus was preaching and thus enabling themselves to bring their suffering brother to the Lord. When Christ ‘saw the their faith’- that of the patient and of the stretcher-bearers- he needed no other confirmation in order to perform what other people had been unable to do.

So he enacted not one but two miracles for the paralytic: he first cured the cause of the illness, sin; and thereafter, so that the miracle would become apparent and credible to the other people there, he made the paralytic’s body well again. In this way, ‘as physician of souls and bodies’, he provided all-round healing to the sufferer. 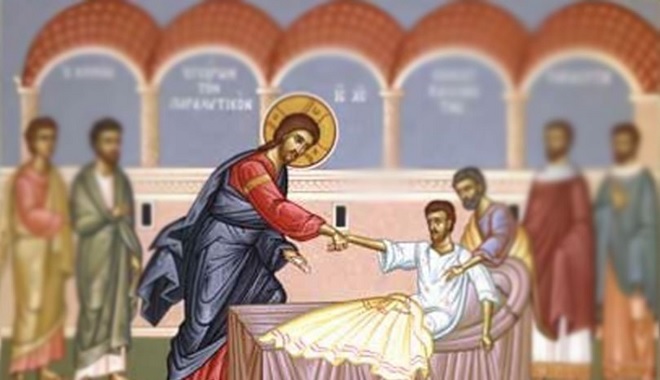 The Lord thus performs, in effect, a third miracle: he attracts the admiration of the assembled crowd, ‘the throng’, who believed, and ‘glorified God for giving such authority to human beings’ (v. 8). This phrase may be interpreted as follows: they glorified God who, through Christ, his Son- whom they considered to be a human person- acted in a miraculous way, and thus demonstrated that the Lord was not simply a human being but also God.  Or they glorified God, who through Christ his Son, gave people the power to heal sicknesses, as we sing in the dismissal hymn to the saints: ‘Glory to Christ who glorified you… glory to him who through you effect all cures’.

There was only one miracle that Christ was unable to perform: he couldn’t persuade the scribes who were present to show their admiration for his undoubted divine power. This was so, not because the Lord didn’t want it, but because they themselves had no desire for it. Given their attachment to the letter of the law, it was impossible for them to accept that ‘the son of man has the authority to remit people’s sins on earth’ (v. 6). It’s well known that no miracle can occur without faith and consent on the part of the persons concerned, because the Lord respects their freedom absolutely.

Let’s ask ourselves in our turn: do we have faith and, if so, what kind of faith is it? Is it the true, unfeigned faith of the ordinary people in the Gospel reading who made haste, in wonder, to confess God’s glory? Or is it perhaps the hypocritical faith of the scribes, who knew the whole of the written law, but stumbled over its implementation, particularly because of lack of humility and love?

Let us first of all conduct sincere self-examination and thereafter follow the exhortation of Saint Paul: ‘Love must be sincere. Hate what is evil; cling to what’s good’ (Rom. 12, 9), being careful to apply both parts- avoiding evil, especially our own wicked self, and doing good faithfully. In this way, we won’t be defeated by evil but will ‘overcome evil by good’ (ibid, 21).

It’s only in this way that we’ll overcome our personal paralysis and face the general paralysis with unfeigned faith and love for God and with genuine love and cooperation amongst ourselves, to the glory of God and the salvation of us all. Amen.