The event of Christ’s Resurrection is the continuation not of the Passion, but of providence, that is, God’s undertaking for the salvation of humankind. Had Christ ended up in the grave and remained there, everything would have been in vain. Our faith would have been in vain, our preaching pointless and everything we do to no avail. If we take away Christ’s Resurrection, everything collapses and, automatically, nothing’s left at all. But if Christ rose, then it follows that all people will be raised in Christ. Saint Paul says that just as we all became mortal through one man, Adam, because we inherit death from the first human person, so, through another person, Christ, we shall all be raised and stand before God. This event of the Resurrection is the corner-stone of our faith and the resurrection of all people is the point which prevents us from agreeing with the theory of reincarnation. 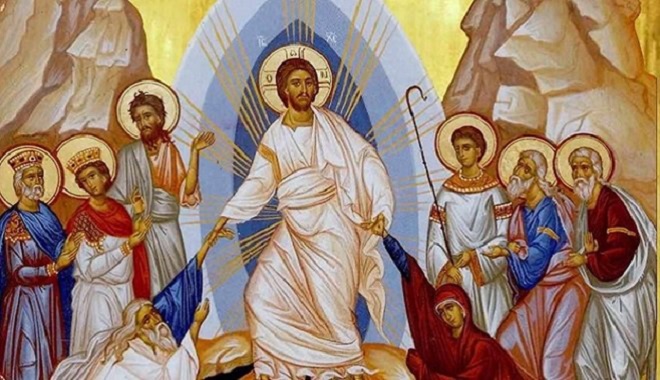 This theory was condemned by the Church long ago through synods and decisions of the holy Fathers. It has re-appeared today, arising mainly from philosophical, ancient Greek or Hindu circles, and is troubling for lots of people, since it gives them various rational explanations for the phenomena of this life. This view of things is completely unacceptable for the Church, because if there’s reincarnation, there’s no resurrection. Resurrection means resurrection of the human body. Our soul doesn’t die; it always exists. Death is merely the biological separation of the soul from the body. The body is surrendered to the grave and the soul proceeds to the realm of the spirits. At the hour of the general resurrection the dead bodies will be raised, they’ll change, they’ll become imperishable, as was the body of Christ after his Resurrection, they’ll be reunited with their souls and will share in the uncreated grace of God, not merely in the spirit, but as whole people, body and soul. Therefore ‘I await the resurrection of the dead’.

Given that Christ rose on the third day, we also await the resurrection of the dead. The time will come when we’ll see all the departed, who will be clad in precisely the same body as they have today, though imperishable. Thus altered for ever, the body will be united with the soul and the personality will be retained as it was in this life. If there’s reincarnation, the question is how there can be resurrection. If the body’s a beautiful garment which the soul wears until it’s perfected, then what will happen in the resurrection, how will the bodies exist and which body will be glorified? This, of course, is a disparagement of the human body, because, besides this there’s the belief that the body is a prison for the soul, that there’s a diarchy in the world involving spirit and body. These notions were condemned by the holy Fathers. The body was made by God; it’s the temple of the Holy Spirit and the habitation of God. It’s not the enemy of the soul, but is firmly riveted to our soul, to such an extent that both our soul and our body participate in the sanctifying grace of God. This is why the body’s sanctified and why it’ll be raised. This is also why we venerate the holy relics of the saints and their physical form: because people are neither only body nor only soul but an indestructible union of both. While many people wonder whether scripture mentions reincarnation, there are some who falsely teach that the Gospel does, indeed, teach it. Were this the case, how could we talk about the resurrection and how could Saint Paul, in his letter to the Hebrews, say that we die once and this is followed by God’s judgement?

Christ rose on the third day, according to and in accordance with the scriptures. This means that the apostles and everyone else who saw the Lord were witnesses. They witnessed Christ’s Resurrection. Christ appeared to many people after his Resurrection. On one occasion he appeared to five hundred Christian people, as it says in the Acts of the Apostles. From then until today, Christ has appeared to everyone who has sought him. It may be that he doesn’t appear to each person in the form of some sort of revelation or a vision, or that they see him face to face as he is as a human being, but you should know that it’s impossible for life to be given to our soul, which is dead because of the passions and sin, unless it has experience of the Risen Lord within it. This is why, beyond all the speeches, the sermons, the advice and everything we say and everything we try to do for those around us, there remains a mystery, which is whether, in the end, the soul we’re addressing can receive Christ within itself. Unless the hour has come for the soul to receive him, if it’s not ready to, then whatever we say, whatever we do, even miracles, even if we’re the most eloquent of preachers, nothing will come of it. In fact, things might turn out worse than they were before. This is why Christ told us to be careful not to give holy things to those who don’t know how to handle them. He meant that, unfortunately, there are instances when people aren’t yet ready to be entrusted with the precious pearl which is the word of God. Naturally, we don’t know the state of each and every person. We’re under an obligation to offer what we have and to render what’s required by love and God’s command. But when we see that the word isn’t received and things aren’t being utilized well, then we shouldn’t be downcast.