For a short time the Holy Mountain was calm [after the Balkan Wars and the liberation from the Turks]. Then World War I began.

The Central Powers had blockaded Greece and hunger was making itself felt on the Holy Mountain, particularly among those living in kellia and sketes. The monasteries were slightly better off because they had their dependencies.

Then the committee representing the monks living in kellia elected Fathers Chrysostomos Lavriokelliotis and Averkios, provided them with money and official papers stamped by the police and sent them to Athens to buy wheat for the Holy Mountain. The blockade was tight and wheat was very hard to come by. The Powers allowed only one steam-boat to discharge its cargo for the whole of Greece. Through the Gounaris government, the monks weren’t able to ensure any supplies. 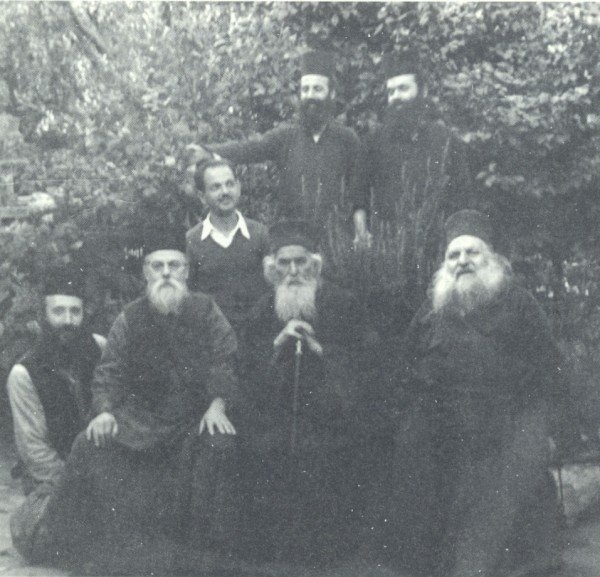 Elder Averkios (with the stick) and his brotherhood: Deacon Dionysios, Monk Haralambos, Deacon Nikanor (back left) and Monk Kosmas.

They then found Eleftherios Venizelos. They asked for his assistance and through his personal efforts with the ambassadors of England and France, they managed to procure 160,000 okas of wheat [about 230 tons] exclusively for the Holy Mountain. Elder Averkios later told how, on the one hand, they were delighted at Our Lady’s blessing, but, on the other, were at a loss as regards finding enough sacks quickly for such a large amount of wheat.

‘I was walking along the streets of Piraeus, very concerned and saying prayers to the Holy Archangels for them to solve my difficulty in finding the sacks we needed. I sat praying on a bench in a square.

A young boy came up to me and said: “Father, you look worried”.

I told him about the problem, how I didn’t know Piraeus so I didn’t know where to turn and that nobody I asked seemed to know either.

“Don’t worry”, he said and pointed to a shop opposite. “You’ll find as many sacks as you want there”.

There and then the young boy disappeared from right in front of me. And, indeed, I didn’t only find all the sacks I wanted, but they gave them to us free of charge’.

They took the wheat but suffered much hardship and many attacks by the German armed forces before they managed to reach the harbor at Dafni [on the Holy Mountain]. It was only by a miracles that they survived almost certain death when they were strafed by German planes based at Kavala. But, in the end they managed to return with their treasure. The kelliote committee arranged for its distribution and thousands of people were saved from starvation.

Excerpt from a text by Monk Païsios Kareotis, published in the journal Protaton, vol. 115, July- September 2009.