First Discourse on the Beatitudes

When Jesus saw the crowds, he went up the mountain; and after he sat down, his disciples came to him. Then he began to speak, and taught them, saying: ‘Blessed are the poor in spirit, for theirs is the kingdom of heaven’.

Come, let us ascend the mountain of the Lord
1. Who among those of us gathered here is worthy of becoming a disciple of the Lord and, with Him, to ascend from poor and lowly thoughts to the spiritual heights of sublime contemplation? This mountain is free of any shadow cast by the looming hills of wickedness and, at the same time, basks in the splendour of the true light. And within the glow of pure truth, it makes visible everything that’s invisible to those who are stranded down below. What these things are which are revealed from the heights, and how many of them there are, is explained by the Lord. When He praises those who’ve ascended the Mountain with Him, He explains, as if pointing with a finger, the kingdom of heaven on the one hand, and, on the other, the inheritance of the homeland above. He then goes on to talk about mercy, justice, comfort and their relation to the God of all. He even talks about the benefits of persecution, which are that we come to dwell with God. The Lord also indicates how many other, similar things can be seen from high up on the mountain, gazing with hope upon them as from a watch-tower. 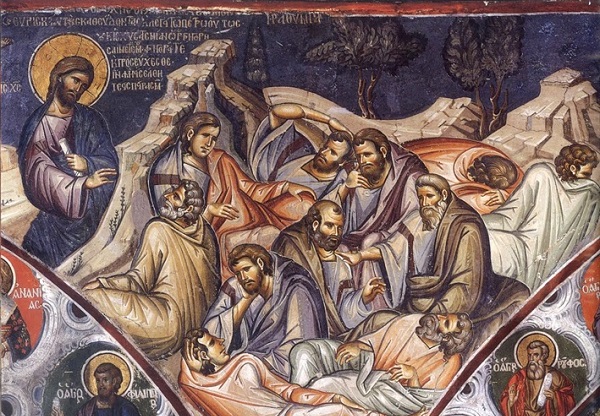 Let’s attend to the invitation of Isaiah who cries aloud: ‘Come let us ascend the mountain of the Lord’. (Is. 2, 1) and if we’re too weak, because of sin, then let’s ‘strengthen the weak hands, and make firm the feeble knees’, as the Prophet tells us (Is 35, 3). Because if we arrive at the summit, we’ll meet Him Who cures every sickness and every weakness. We’ll find Him Who takes upon Himself our illnesses and bears the burden of our sicknesses. So let’s run up the hill to reach the peak of hope, with Isaiah, and then we’ll see from above the blessings which the Lord shows to those who follow Him up the incline. But may the Word of God open His mouth to us, too, and teach us those things which it’s a blessing to hear. Let’s begin from where the Lord begins His teaching.

Blessedness
2. He says that those who are poor in spirit are blessed, because the kingdom of heaven belongs to them. Let’s suppose that somebody who loves gold happens to find information in books that there’s treasure in a particular place. But the place where the treasure’s hidden needs a lot of sweat and effort from those who want to acquire it. So this man will quail at the prospect of so much effort and he’ll reckon that it’s better not to tire himself out trying to get the treasure instead of enjoying it. But that’s not how these things work. On the contrary, he’ll call on all his friends and ask for their help, gathering lots of people to ensure he makes the hidden treasure his own.

This is ostensibly the treasure that was mentioned, but the real riches are hidden by the vagueness. If we also wish to acquire the pure gold, let’s use the power of prayers, so that, for our sake, the gold will appear on the surface. We can then share it equally so that none of us has all of it. Because sharing a virtue is such that, even if it’s shared among all of those people who are seeking it, it belongs entirely to each one of them and isn’t reduced among those who are taking part in it. Whereas with sharing material wealth, whoever seizes more is being unjust towards those who want a fair share. Because whoever increases his own portion inevitably reduces that of the others who are taking part in the distribution. With spiritual riches, however, the same thing happens as with the sun, which shines on all of those who see it and belongs fully to each one of them. So since we hope that the profit for each of uswith be commensurate with the effort, let’s all help each other equally with our prayers, so that we achieve what we’re seeking.

And first, I think, we should understand what the word beatitude really means. Being blessed [fortunate], in my opinion of course, is an encapsulation of everything we mean that has to do with what’s good. It lacks none of the things which are related to pure wishes. But we can make the meaning clearer by comparing it with the opposite. And the opposite of blessed [fortunate] is wretched. Wretchedness is tribulation through the lamentable and unwished-for passions. Blessedness and wretchedness are distinguishable by the opposite dispositions of those in one state or the other. People who are blessed rejoice and are glad and enjoy whatever’s before them; wretched people suffer and are pained with whatever life brings. A truly blessed existence is Divine. Because however we suppose the Divine to be, blessedness is that pure life, the indescribable and incomprehensible good, the inexpressible beauty, that which is all grace, wisdom and strength, the true light, the source of all goodness, the supreme authority of all, the only desirable thing, that which is always the same, permanent rejoicing, about which much might be said though nothing which would be worthy of it. Because not even the intellect can approach God, but were we able to understand some of the most sublime things about Him, words would fail us in trying to make them comprehensible.

Since, however, God made us in His own image, we might also say that what was created in God’s name is also blessed and partakes in true blessedness. Because bodily good looks, that is the original beauty, resides in the living, breathing person, whereas what is painted in a picture as imitation is a poor second The same is true of overwhelming blessedness, which is human nature. This, too, is adorned with pure beauty when it bears the signs of the features of a blessed person. But because the filth of sin had smudged the beauty of the image, Christ came and removes it with His own water which revives us and brings eternal life. So we, too, can cast off the ugliness of sin and can be made new, in accordance with the blessed, divine form. And just as in the art of painting a master can say to beginners that this portrait is good because it has the various features right: the hair, the circles of the eyes, the lines of the eyebrows, the cheeks and all the others separately, completing the overall beauty, so the Lord, Who portrays our soul afresh, in simulation of the only truly Blessed One, our God, describes in words the particular features which contribute to blessedness. And the first thing He says is: ‘Blessed are the poor in spirit, for theirs is the kingdom of heaven’.