Joachim and Ann: the most fortunate parents

The most fortunate parents in the history of the world are those of the Mother of God, Joachim and Ann. The Church hymns them as the happiest of all progenitors. “Fortunate couple! you have surpassed all other parents in that you begot her who was superior to all creation” (Doxastikon, Vespers, 9 September). 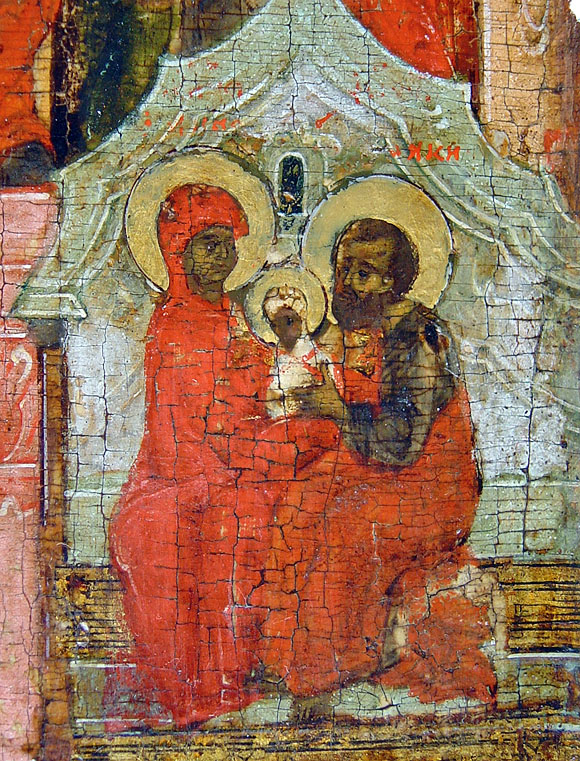 Joachim and Ann are the most fortunate of parents because they begot the most beautiful and holy child in the world. They begot her, the Mother of God, who is superior to all creation. Let’s put the whole of creation, all the stars, all the people, all the saints onto one side of a pair of scales and the Mother of God on the other, and she’ll outweigh them all.

According to the Fathers, the whole world came into being for the Mother of God, and the Mother of God for Christ. Christ is the cause and the aim of creation. And if Christ became a person, the God/Man, it was because the Virgin Mary already existed. Just as the tree is there to bring forth fruit, so human and angelic nature exists for the Virgin Mother of God, who is superior not only to all other people but even to the angels and archangels.

So can any other parents be as fortunate as those of Our Most Holy Lady? Saint John the Damascan hymns these parents and says: “Fortunate couple, Joachim and Ann, the whole of creation is grateful to you. Because from you it offered a gift to the Creator, a gift superior to all others, a chaste mother, unique, worthy of the Creator. The wondrous womb of Ann, within which the all-holy infant was created, grew and then was born. A womb that bore the animate heaven, broader than the infiniteness of the heavens”.

The human race is indebted to Joachim and Ann for the gift they made to it. They gave us Mary, the Mother of God.  And the parents of  Our Most Holy Lady are grateful and indebted to God for the great grace He bestowed upon them. 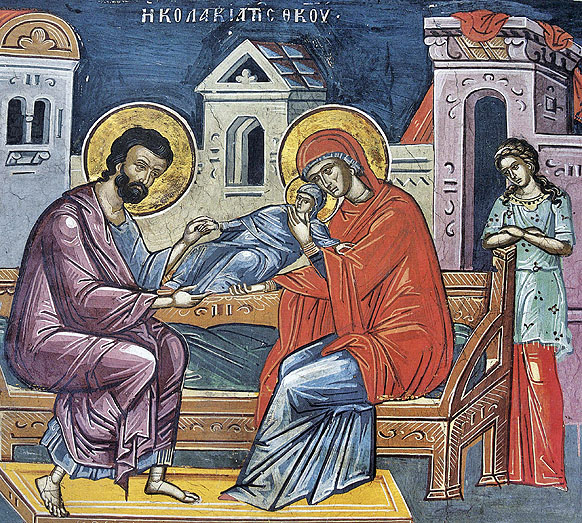 The name Ann means “grace”. God gave them grace. What was Ann? Barren. She couldn’t have children. But her prayers were answered and she did have a child. We know from the Old Testament that other barren women were able to have children in a miraculous fashion. Sarah had Isaac; Hannah, the wife of Elkanah, had Samuel; and Elizabeth bore John the Forerunner. Joachim’s wife, Ann, was the only one of these who gave birth to a girl. Why? Because a woman, the old Eve, gave birth to sin and death through her disobedience. Our Most Holy Lady, the new Eve, through her obedience, gave birth to the sinless Saviour of the world and from her came life.

Joachim and Ann were worthy of grace. Both of them were charismatic people. Christ says: “By their fruits you shall know them” (Matth. 7, 16). Children are the fruit and an image of the parents. Devout, believing parents produce good children. What children can we expect today from parents who are impious, unbelievers, secular and obscene? Rotten trees, rotten fruit. Immoral parents, corrupted children. There are, of course, exceptions. But the case of the Mother of God kept to the rule. Saintly parents, holy child. One of the troparia says: “Having a superior life and a shining existence, you were also superior to all earthly progenitors, in begetting the uncontaminated Virgin (ode 1 of the canon for September 9).

And Saint John  the Damascan adds a theological note: “Living your lives in purity and sanctity, you begot the jewel of virginity: a virgin before birth, a virgin at the time she gave birth, and a virgin after she gave birth; the only one to remain forever a virgin in mind, body and soul”.

[1] In Constantinople, the clergy and faithful would gather together (synaxis= assembly) on specific feast days at a church dedicated to the saint of that day for liturgical celebrations. These gatherings were referred to as synaxes. These synaxes came to have services written specifically for them. A Synaxis often occurs on the day following a Major Feast Day and is in honor of saints who participated in the event. In this case, the synaxis of Joachim and Ann follows that feast of the Birth of the Mother of God.

Synaxis can also refer to a common commemoration of a number of saints in a single service, such as the Synaxis of the Seventy Apostles. Each saint may have his or her own separate feast day, but they are all commemorated together on their synaxis.