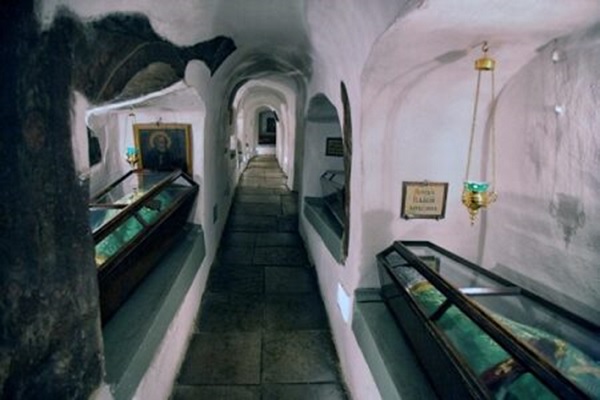 The Kiev-Pechersk Lavra, relics of the saints

In 1463 the archimandrite of the Monastery of the Caves was the blessed Nicholas. On Easter day that year, when all Christians were celebrating the ‘death of death’ and the ‘overthrow of hell’, one of the fathers of the monastery, the devout and virtuous hieromonk Dionysios (Schepa), entered the cave of Saint Anthony in order to cense the venerable relics of the departed saints. He was accompanied by a few other members of the brotherhood who were holding lighted candles.

When he reached the place which had formerly been the refectory of the monks of the caves, blessed Dionysios censed the holy relics and shouted joyfully: ‘Holy fathers and brothers, this is the chosen and holy day… the feast of feasts. Christ has risen!’.

Just then -what a miracle- all the incorrupt holy relics raised their heads slightly and answered in a loud, otherworldly voice: ‘He has risen indeed!’.

The godly Dionysios and his companions were astounded and hurried off to tell Abbot Nicholas  and the other brethren what had happened so that they could glorify the risen Lord and his sanctified servants.

The venerable Dionysios is commemorated on October 3.