The ‘Severus’ mentioned in the text was Patriarch of Antioch from 512 until 518, when he was deposed. He continued to be regarded as Patriarch by those who did not accept the Christological terminology of the Ecumenical Synod of Chalcedon (451). He is honored as a saint in the non-Chalcedonian churches, but is regarded as a heretic by the Orthodox. For those who read Greek, there is a very clear exposition of the salient points, written by the Holy Monastery of Grigoriou on Mount Athos, at: https://www.impantokratoros.gr/othodoxia_kai_antixalkidonioi.el.aspx

Anastasios, the presbyter and guardian of the treasures of the church of the Resurrection of Christ, narrated this to us.

Kosmiani, the wife of the patrician Germanos, came one night and wished to venerate, by herself, the holy and life-giving tomb of our Lord, Jesus Christ, the true God. As she approached this sacred monument, she was met, in plain sight, by our holy Lady the Mother of God, accompanied by other women. Our Lady said:

‘Since you’re not one of us, you may not enter here, for you’re none of ours’ (Kosmiani belonged to the heresy of Severus*) 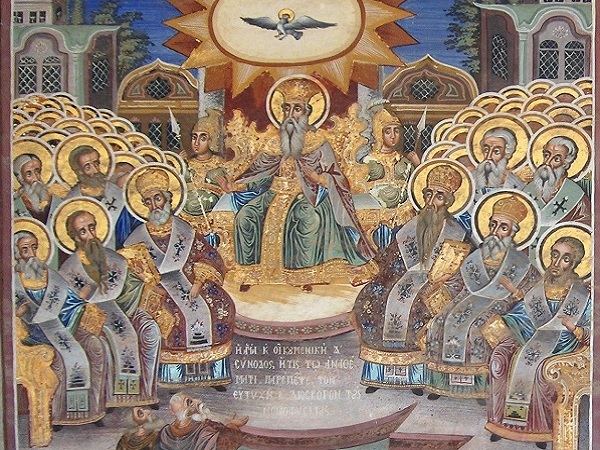 She implored our Lady to be allowed to enter and the Mother of God responded:

‘Believe me, madam: you won’t enter here until you receive our communion’.

Kosmiani realized that she was being prevented from entering because she was a heretic and that, unless she returned to the holy, catholic and apostolic Church of Christ, she could not enter. She immediately sent for the deacon and, when he arrived with the chalice, she partook of the holy body and blood of our great God and Savior, Jesus Christ. And then, without let or hindrance, she was able to venerate the holy and life-giving tomb of our Lord Jesus Christ.

Anastasios the presbyter also told us the following:

When Gebemer became governor of Palestine, among the first things he did was to come to venerate the holy Resurrection of Christ our God. As he approached in order to enter he saw a ram charging at him and trying to impale him. He was overcome with fear and drew back. Then Azarias, the guardian of the Cross, who happened to be there with other guards, said:

‘Why have you brought that ram in here?’.

They were astonished, bent down and looked into the holy tomb, but saw nothing. They urged him to go in because there was nothing there.

So he made another attempt to enter, but saw the same ram coming at him and not allowing him in. This happened a number of times. He saw the ram, of course, but the others didn’t, so the guardian of the Cross said to him:

‘You can be sure, my lord that there’s something in your soul that’s impeding you from venerating the holy and life-giving tomb of our Savior. You would do well to confess to God. Since he’s loving and wants to have mercy on you, he’s given you this sign’.

In tears, the man replied that he was guilty of many great sins against the Lord. He fell face-down to the ground and remained for a long time, weeping and confessing to God. When he arose, he tried again to enter, but was unable to, because the ram appeared and impeded him no less than before. Then the guardian of the Cross said to him: ‘There’s certainly some thing else preventing you’. Gebemer replied: ‘Perhaps what’s stopping me is that I’m not a communicant in the holy, catholic and apostolic Church, but that of Severus?’.

He immediately asked to partake of the holy and life-giving sacraments of Christ our God. When the chalice arrived, he made his communion and was then able to enter and venerate the tomb without seeing anything untoward.

* At this point the Greek text calls Severus ‘the Headless’. This was a common epithet for schismatics and heretics at the time (perhaps because they didn’t belong to the Church, the Body of Christ, and therefore had no head?). It’s also interesting that there seems to have been no formal procedure for the reception of heretics, other than their desire to take Orthodox communion.