Today’s Gospel reading is a parable. It presents an unnamed rich man, who was callous, and a poverty-stricken man, who answered to the name of Lazarus. In Hebrew, Lazarus means ‘God has helped’, that is, even his name has a suggestion of the great penury in which he lived [he found his help in God]. But let’s note some of the observations of the holy Fathers as to whether the story is really a parable. Saint Cyril of Alexandria writes that although Christ avoids mentioning the rich man’s name and simply says: ‘There was a rich man’ (Luke 16, 19), he didn’t do the same with the poor man. ‘Why did he not say : “There was also a poor man”, but instead says “Lazarus”? In order to show that the events [about to be related] really did happen, in fact’. Efthymios Zigavinos goes even further and says that, according to Jewish tradition, the rich man was called Nineuis and the poor man Lazarus. After they’d both died, ‘Christ constructed a parable about them’. Saint Theofylaktos says the same, that there was in Jerusalem a certain poor man called Lazarus, who was famous for his poverty. 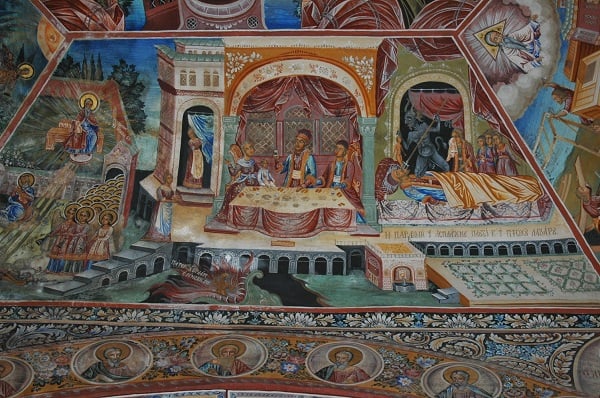 Lazarus has many distinctive features. He was poor, ill and covered in sores. You can be sick but not be a mass of open wounds. Lazarus suffered from both. On top of this he had the psychological misery of watching others stuff themselves with food, while he was dying of hunger (Saint Theofylaktos)*. His own people had forgotten about him and, what was even more tragic, was that whereas nobody came to help him, ‘the dogs came and licked his sores’. At the gates of the house of the rich man, Lazarus was like a ship that had reached the mouth of the harbor but had foundered before entering. He was close to a spring and suffered from thirst: his soul was distressed with the most terrible thirst, says Saint John Chrysostom. According to the same saint there was a sly suspicion and view among many concerning the person of Lazarus: that, since so much evil had befallen him, he must have been a great sinner.

What did the Lord wish to teach with this parable?

In the first place, he wanted to reject the misplaced Jewish sentiment that anyone who was sick and poor must necessarily be lacking God’s favor. The poor man died and was taken by the angels ‘into the bosom of Abraham’ (ibid, v. 22). The rich man, on the other hand, was in great torment after his death. Even when he was still alive, the implacable rich man was in the tomb of deprivation of God’s grace, as he was after he died. His soul was buried in worldly goods. It won’t end well for those who manage their wealth selfishly and don’t come to the assistance of the poor, their brothers and sisters.

With this parable, the Lord wanted to show us  that we should love one another and the poor. He made this point often: ‘Sell all you have and give alms’ (Luke 12, 33). This command is, indeed, kind, good and redemptive, but it’s also very difficult to apply. Many people find it hard to accept. The human mind meets obstacles in those commandments that need ‘force’ in their implementation. So, in relating this parable and showing the results of the lives of these two very different types, the Lord urges us to manage our wealth in a spirit of altruism. He tells us: ‘Make friends for yourselves from unjust wealth’ (Luke 16, 9).

The use of the verb ‘to enjoy’ makes an impression. According to Zigavinos it has to do [in cases such as this] with the settlement of a debt. What did God owe the rich man and the poor? No doubt the rich man would have had some sort of virtue; he wouldn’t have been entirely devoid of the virtues. For this virtue, he was given lavish amounts of worldly goods. And the poor man would certainly have had some failings. What he was due for his wickedness, was discharged through his hardships and the patience with which he bore them. When they died, the one was left with out-and-out wickedness and the other with unalloyed virtue. They both received their just deserts on earth**. God had the say in the next life.

In our everyday life, there are many people who seek our assistance. And, often enough, we’ve refused to help somebody when we could have. This wonderful parable helps us overcome our selfishness and to feel that other people are our brothers and sisters. This will bring us either the Kingdom of God or be the cause of our eternal condemnation.

* In Jewish tradition, this was one of the features of Sheol: the righteous and condemned were separated by a short space, perhaps even with a wall, and the aggravation of the wicked was increased by the knowledge that the righteous were living in felicity just next door to them.

** Or, as D.F. Strauss puts it: ‘In this parable, the measure of future recompense is not the amount of good done or wickedness perpetrated, but of evil endured and fortune enjoyed’.