Faith in the name of the Lord works wonders

Today’s Gospel reading presents two miracles: that of the cure of the woman with the issue of blood, who’d been sick for all of twelve years; and the resurrection of the daughter of Jairus, the head of the synagogue. These miracles are described by the Evangelists Mark and Luke, and bring us face to face, once again, with the mystery of death.

Burdened by the cross of anxiety over the life of his child, Jairus approached Jesus, fell at his feet and implored him to go to his house to cure his only daughter, who was twelve years old and dying. The Lord started out for Jairus’ house.

Among the crowd was a woman who’d been hemorrhaging for twelve years. She’d spent a good amount of money on doctors, but in vain. She approached Jesus very humbly and in prayerful silence, without anyone noticing her, and, with deep and living faith touched the edge of the Lord’s garment. What a miracle! At that moment, the flow of blood ceased. My brothers and sisters, what results faith brings. In order to make known the faith of the woman, the Lord asked who had touched him, because he’d felt power leaving him. 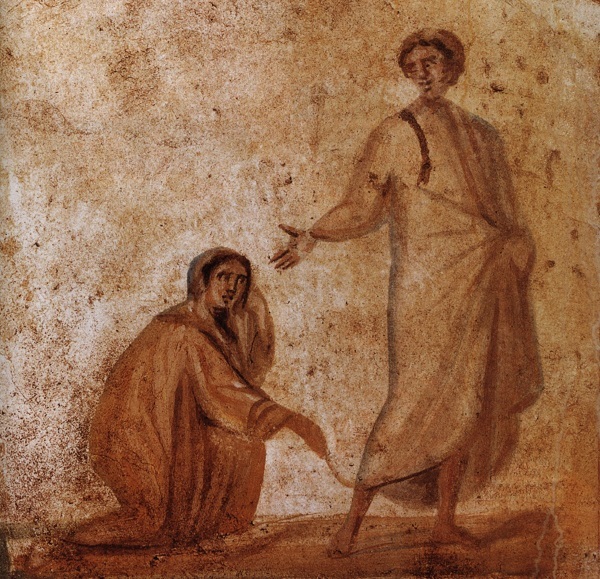 While Jesus was teaching and talking, one of the relatives of the head of the synagogue came and announced the sudden premature death of the girl. His family and the whole of Capernaum were plunged into mourning. But the Lord comforted the father of the dead daughter and told him not to fear: as long as he had faith she’d be saved. Once they arrived at the house, Jesus wouldn’t allow anyone in except the leading disciples, Peter, John and James, and the parents of the girl. The Lord comforted them in their grief and assured them that she wasn’t dead but sleeping. He then took the child by the hand and told her to get up. Her soul immediately returned to her body and she arose. The parents were speechless at this astonishing miracle and Christ asked them not to tell anyone about it. He didn’t want the superficial praise of this empty life, plaudits which are hypocritical and only for show. They were of no use to him, because they didn’t affect his life, although they do for many of us. Any good you do is rewarded with God’s grace, not with the praise of others. Besides, there was also the risk that they’d see him as a national wonder-worker, rather than understand what he did as acts which manifested the grace and blessing of God. Moreover, he didn’t wish the event to become widely-known because this would have fueled the envy of his enemies.

Jairus had great and living faith in Christ. Faith isn’t a form of knowledge, a simple theory, a philosophical system that functions with human reason. Rather, it’s a divine force, a living flame. Our cure depends on the manner in which we approach God, the source of healing.

We have to accept every gift from God with thankfulness and gratitude. The Lord wanted to emphasize the faith of the woman in order to teach us that faith is the necessary requirement for God to do good to us. It’s true that God, in his infinite mercy, often does good to people even without the prerequisite of faith. But when he asks for faith from people he emphasizes their entity as free and rational creatures. How can people be free and rational if, for their own part, they aren’t willing to accept their salvation. God asks the least possible of us: faith in the living God, in his love, in his ongoing readiness to give and do to people everything they need for their good.

By announcing the faith of the woman, the Lord also wanted to strengthen that of Jairus. He wanted to show him that it wasn’t necessary for him, Jesus, to go to the house and touch the dead girl with his hand. He has the power to effect cures in many ways, not only by the laying on of hands. He can heal with his clothes as well as his hands; at a distance or close at hand; and on the road as well as inside the house. 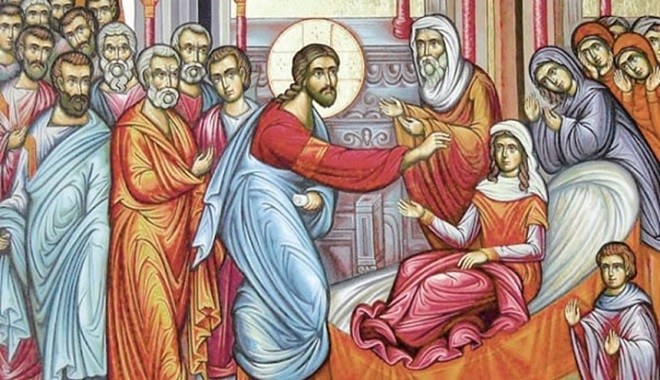 Our distress in the face of death often makes us forget what our holy Church believes and teaches concerning it. We don’t have the power to theologize when faced with the mystery of death. As Saint John the Damascan tells us in the funeral service, ‘the mystery of death is, indeed, most dread’. Certainly, we can’t fail to be affected by death, because it’s inhuman. As Saint Gregory Palamas tells us, the cause of the coming of death into the world lies in us humans, and in particular, in our wrong and mistaken use of our independent authority over ourselves. ‘Sin entered the world through one person and death through sin, so that in this way it spread throughout humankind’. Saint John Chrysostom says: ‘For death did not beget sin, but sin bore death to us; death became the specific of sin’. The separation of the soul from the body is a harrowing moment for the person concerned, but it’s also a distressing experience for those who are bidding farewell to their loved one, someone from their family environment or their circle of friends. This is why we fear death, because its advent is associated with being plunged into sorrow and mourning.

Our live is fleeting. We came in order to leave. In a way, we’re tourists in this place where we’re living. We don’t own anything. At many points, Holy Scripture emphasizes the transitory nature of our life. We’re grass, and the flower of grass, we’re a shadow which departs quickly and disappears, and, as the Prophet Isaiah says,  we only live long enough to pull down the hut we’ve just built.

We must have hope in our resurrection, as we see in the example from the Gospel reading. The resurrection’s our destination. The body will be raised. And, indeed, not in the sickly form it has now, but having acquired permanence. It won’t suffer from pain, sickness or death. It’ll change its state, just as iron does when it enters a hot fire and becomes transformed into a flaming mass. Saint Cyril of Jerusalem tells us that the properties of our body will undergo some similar type of change, in accordance with the will of the Lord, who will raise it up.

Christians who strive and who have their hope in God’s mercy don’t fear death; on the contrary, they overcome it in a single, unique manner: by slaying, every day, their passions and sinful desires, which are what, every day, cause their spiritual death, since they essentially distance us from God. At those difficult times, we must enlist all the forces of our soul if we’re to stand fast and not surrender to grievance and despair. Death is the consequence of the sin of our first ancestors; it wasn’t created by God, as some people claim. The wise Solomon tells us that ‘God did not make death, nor does he delight in the perdition of the living’.

The conclusion may be drawn from this Gospel extract that, when we’re close to Christ, if we’re sick we’ll be cured and if we’re dead we’ll be raised. Those who wish to approach God and be united with him can do so through the Church, the body of Christ, of which we are the members and of which the head is Christ. In the Church we can approach God and can also be united to him and be glorified. That is, we can become Christ-bearers and God-bearers.

My beloved brothers and sisters, let us have faith in God’s providence and may we be optimistic, because miracles occur at just the time they’re needed, when we’re in a position to accept them with humility, not pride.