More than at any other time, people today demand the implementation of the principles of liberty, justice and equality. They want to be recognized as individuals of value. They’re tired of and distressed by the ceaseless squabbles and exploitation on the part of the authorities of this world, which are directed exclusively and solely at their own self-interest and at taking advantage of others. The human person, the image of God, has been marginalized, because where self-interest prevails, people are trodden down.

Within this impersonal and frosty society, we Orthodox are called upon to pass on the light of the Orthodox Faith and to shine with the tangible and living witness of our Christian life and actions. Because Orthodoxy is the only path that will bring people to a correct view of God, of life and of themselves. It’s the only power which embraces the soul hardened by sin and plants repentance within it. It’s the only thing which leads sinful people out of the mire of sin and into sanctity,  restoring their adoption in God’s grace. 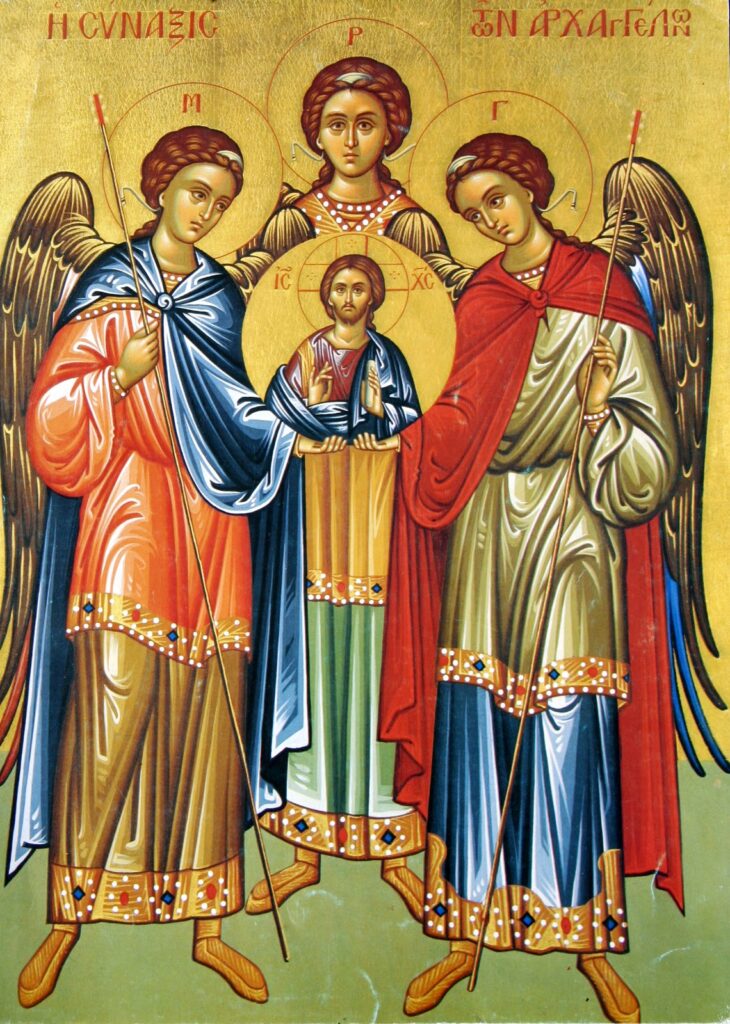 If people live at a distance from God, it’s natural that they’ll experience an all-pervading darkness which doesn’t permit them to see and properly recognize the various problems in their life. Religious teaching certainly plays an important role in the life of the individual and the whole of that life is shaped by whether that teaching is correct or not. This is why the holy Archangels have a special place and value in the Orthodox Church.

Orthodox Christians are characterized  by the fact that they separate themselves from the love of sin, the life of sin and the passions of sin and dedicate themselves entirely to love of God and other people. They part from the world, but never from other people. They want to communicate with God, but they also interact with their neighbors. They live in the angelic state, in imitation of the luminous heavenly powers, but at the same time are a light and example to those around them, near and far.

In today’s times, we who, by God’s grace, have been granted divine enlightenment have a duty to keep the light of Orthodoxy burning in the lamp of our heart, continually topping it up with the oil which flows from the virtues and good deeds. God’s divine grace has been given. Now it’s up to us to add our own good actions, works of faith, to the initial divine energies, so that the Gospel messages can be embodied fully in our personality. In this way we show ourselves to be people who’ve been reborn, the offspring of light, worthy of our name and calling as children of God.

We’re all bound to serve God and other people selflessly and willingly. At the dawn of the 21st century, small and large societies are ready for the advent of Orthodoxy, real Christianity, to brighten them with its presence, to illumine through its teaching, to guide by its example and to stabilize with its moral precepts all those being buffeted by the gales of sin and in danger of being lost in the bottomless depths of ignorance.

The holy Archangels, who celebrate today, are models for all Christians, because as lighted lamps and burning candles they serve the will of God with faith and dedication. They show themselves to be protectors and helpers of  those who turn to them in hope and seek their grace in faith. Like shining stars in the bright firmament of Christ’s Church they shed the light of the angelic state to the farthest corners of the earth.

The important point for reflection on today’s feast of the Archangels is whether the lamp of our Christian existence is shining brightly on its stand, whether our Christian principals are radiant, no matter what our social position, and whether the consoling and gladsome light of faith, hope and love is being imparted to those around us.

Through their devotion to the one true God, the holy Archangels have shown us the rules of proper faith. They’ve been the protectors and defenders of all those who are drowning in the many and varied problems of daily life.

If, by a felicitous combination of circumstances, we happen to have a certain economic security and a better life, this should not blind us to the fact that people, including children, are dying daily from the scourge of starvation. The sicknesses which afflict our brothers and sisters should kindle compassion in our Christian soul. Our thoughts should be suffused with the words of the Lord, who taught us not to lay up treasures on earth, but to do so in heaven, at the spiritual table of our generous Father. Because, ‘blessed are the compassionate, for they will find compassion’.

Today’s feast of the Archangels presents us with the opportunity to take stock of ourselves; to see how far we’re putting into practice the Lord’s divine commandments; the extent to which we’re being faithful to our Savior; how seriously we take the needs of the poor; and whether we alleviate the pain of the sick. And, from the bottom of our heart, let us ask the Lord to grant us the boon of becoming ‘the light of Christ’. Let us live in the angelic state, imitators of the two greatest Archangels, Michael and Gabriel. And finally, through our exemplary life may we spread far and wide the message of hope for a better society, free of the tribulations of life, pain and misery.