Hysterical Reaction to the Nativity of Christ

The incarnation of the Son and Word of God is the most heartening and cheering event in human history, because it represents the dawning of the redemption of humankind and the whole of creation from the dread enslavement to sin and corruption, which were introduced into divine creation by the devil, the nefarious adversary of God and destroyer of his works. The holy angel of the Nativity proclaimed to the humble shepherds in Bethlehem that: ‘Behold, I bring you good tidings of great joy, which shall be to all people. For this day in the city of David a Savior is born unto you who is Christ the Lord’ (Luke 2, 10), thus bearing the joyful news for which every human soul longed. This truly great joy was manifested to those simple people, who were the first to experience the inexpressible exultation of the incarnation of God, which was the beginning of the salvation of the human race.

The same joy and gladness overwhelms each person who recognizes our redemption in Christ, who lays upon the Lord every trouble of life and who hopes in their personal transformation into someone who is ‘mature, attaining to the whole measure of the fullness of Christ’ (Eph. 4, 13), or, to put it differently, who attains their glorification by grace. This joy is experienced by everyone, unconsciously, who celebrates the great event of the Nativity of the Lord, even if this is in their own, purely formal way, involving the mad consumerism attached to these holy days. Even non-Christian people participate in this celebration, because they can’t avoid this great feast. Jesus Christ has been grafted onto the whole of human nature, in all places and at all times, with his sanctifying grace. 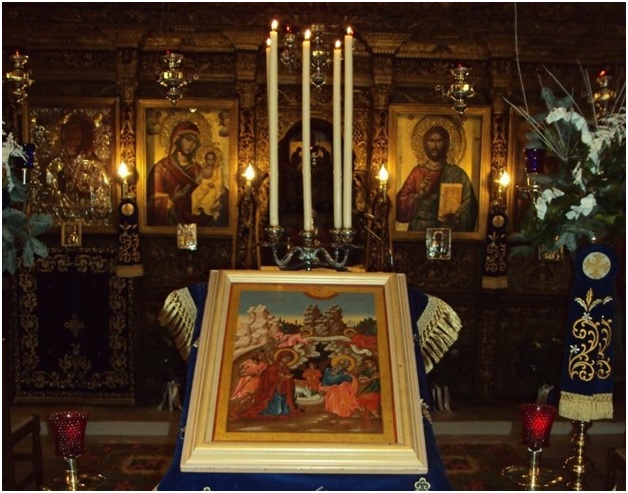 Alas, there is, however, a tragic exception to this rule. There are people who not only refuse to participate in the universal joy we all feel because of the divine incarnation, but on the contrary are cast down and miserable during the twelve holy days. They curse the fact of Christ’s Nativity and attempt, unsuccessfully, to diminish its significance. Their spiritual obscurantism and diabolical mind-set prevent them from perceiving, even to the slightest degree, the magnitude of the divine gift. Their mental color-blindness ensures they remain deeply in the dark and they can’t see with clarity and objectivity the great and saving change that Christ brought to the world.

These woeful dirges against Christmas come mainly from groups of atheists, nihilists, agnostics, pseudo-intellectuals, and other anti-Church groups. Their lamentations are augmented by some adherents of ancient religions, who are to be found in the newly-minted, worldwide neo-paganism movement (New Ragan) which is, as has now been shown, an offshoot of the infamous occult network known as the New Age of Aquarius. These are groups of people with a strange outlook who bring with them their own baggage. Unable to endure the Christian life, they’ve turned to the pagan, pre-Christian past. It’s common knowledge that the pagan beliefs of antiquity pandered to human urges and encouraged people to live by their instincts, setting no moral boundaries. Christian ethics, however, present an obstacle to moral laxity, which is why they’re rejected by such groups and produce an unprecedented revulsion among them. The divine Person of Christ the Redeemer and his holy Church occasion rabid hatred and an unbalanced desire for revenge among them, and so they do everything they can to slander and diminish Christ the Savior and his redemptive work on earth.

One of the more absurd attempts to supposedly prove the non-historicity of Christ, is equating him with the so-called ‘sun gods’ of various pagan deities. Taking the date of the celebration of Christmas as their starting-point, coinciding, as it does with the winter solstice, they labor to prove that Jesus Christ never, in fact, existed at all and that belief in him is a corruption of the myths of Hercules, Sabazios (Dionysus), Osiris, Mithras, Odin and other ‘solar deities’, who according to the fanatical adherents of the ancient religions, did actually exist, whereas Christ didn’t. Unbelievable and inconceivable.

We shan’t be referring to the mythological narratives concerning the births of these non-existent deities, since they’re more or less well known to many people. They’re actually rather entertaining, with their convoluted and bizarre construction, and may be attributed to the morbid imagination of those who composed the myths in the dim and distant past. What we shall do, however, is insist on the great truth that Jesus Christ is (at least) a certified historical person, according to a huge amount of reliable evidence. The unbridled imagination of the ancient mythographers is as far removed from historical reality as the sky is from the earth. Compared with the divine person and life of Jesus Christ, the biographies of the solar deities demonstrate the yawning gap in quality between them. The gods of all the pagan religions are dominated by unacknowledged passions and weakness (murders, acts of violence, rape, adultery, incest, and so on) which not only are unfitting for gods, but are to be found only in the worst of people. All in all, the gods of the pagans are classic examples of the kind of immorality we should avoid. And when people imitated the life-style of these deities, they transformed their societies into living hell. Unlike our Lord, Jesus Christ to whom nobody, not even his most determined enemies, was able to attach the slightest moral defect. He spent his life on earth bringing benefit to people, and confirming his work with his precious blood as ‘a ransom for many’ (Mark 10, 45). There isn’t the slightest suggestion that he ever did anything bad and he was the only one who dared ask his fellow-countrymen, who were well acquainted with him: ‘Who among you accuses me of sin?’ (Jn. 8, 46).

His supreme benefaction towards the human race is the voluntary abandonment of his divine majesty and the humble adoption of human nature in order to save us who were fallen. Far from being our benefactors, the pagan sun gods did damage to us, if the mythological narratives are anything to go by. Moreover, if we delve into the Bible for an explanation of their presence in the world, we’ll see that ‘all the gods of the pagans are demons’ (Ps. 95, 5) and so we can clearly understand their demonic and destructive effect on human societies. Throughout the length and breadth of the planet, modern adherents of these ‘gods’ long for the world to founder in the dark abyss of contemporary New Age occultism, from which there is no escape.

The ‘Messenger of Great Counsel’ (Is. 9,6), the sole ‘Angel of the Covenant’ (Mal. 3, 1), the incarnate Word of God (Jn. 1, 14) didn’t merely bring the message of salvation to the world, but came himself and, of his own accord, became a sharer in the human problem so that he could effectively deal with it as the most perfect gesture of ‘goodwill among people’ according to the angelic hymn of the Nativity (Luke 2, 14).

Believers in Christ rejoice with ineffable exultation, ceaselessly praising, ‘with one mouth and one heart’, God who became a child for us, the Cause of our salvation’ This is a courteous, silent response to all those who bewail, lament and languish over the great, world-saving event of the divine incarnation. On these holy days, in a genuine spirit of love and tolerance, we urge others to open at least a small crack in their troubled hearts so that the noetic Sun of Righteousness may enter: to ease the turmoil of their spiritual world; to enlighten their deluded understanding so that they come to realize the utter impossibility of any attempt to overcome him who triumphed over the world, the devil, and death; to understand that they won’t be an exception and won’t succeed in dethroning the King of Kings from billions of hearts around the world, something which countless hordes of his enemies have failed to accomplish over the course of twenty centuries. Let them admit the obvious: that the world will be saved not by non-existent solar deities, pagan gods, but by the undeniably existing pre-eternal Word of God, who through his incarnation is and will be present eternally in human history.

But, alas, there’s a tragic exception to this rule. There are people who not only decline to participate in this universal and worldwide joy in God’s incarnation, but who, on the contrary, bemoan and bewail these holy Twelve Days of Christmas. They curse the event of Christ’s Nativity and attempt, without success, to diminish its significance. Their spiritual stupor and diabolical outlook prevents them from understanding the importance of the divine gift, even to the slightest extent. Their spiritual color blindness confines them to impenetrable darkness and they’re unable to see clearly and objectively the great and saving change which Christ brought to the world.

These pathetic laments against Christmas come, for the most part, from groups of atheists, nihilists, agnostics, pseudo-intellectuals and other anti-clerical categories. Their cries are mingled with the dirges of some adherents of ancient religions, belonging to the emergent, global movement known as New Ragan.