The Miraculous Appearance of the Archdeacon, Saint Stephen, in Karyes

Our holy Abbot, Archimandrite Gavriil, had gone to Karyes for the Double Assembly which had been called by the Holy Community, and on his return told us about the appearance of the Holy First-Martyr Stephen, which occurred in the chapel in our representative’s house (konaki).

On the previous Sunday, 14 July, the feast of our Holy Father Saint Nikodimos the Athonite, the Monastery’s representative [at the Holy Community] invited the very devout Hieromonk Fr. Nikostratos to celebrate the Divine Liturgy at the konaki. He was also the representative of his own Monastery, the venerable Russian Monastery of Saint Panteleïmon. 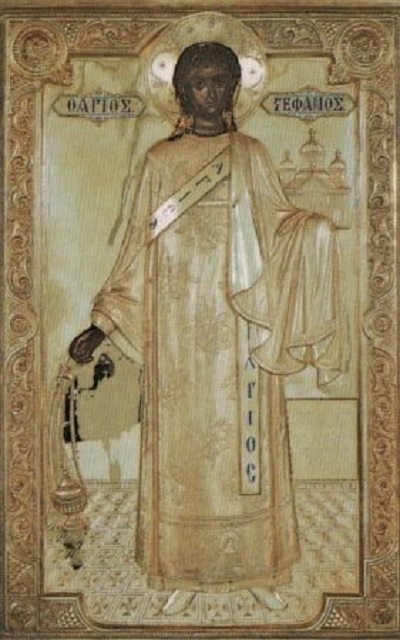 The wonder-working icon of Saint Stephen which is in the chapel of the same name in the konaki of the Monastery of Dionysiou in Karyes, on the Holy Mountain.

The Divine Liturgy was to be held on the occasion of the double feast and for the monks who’d been sent from the Monastery to gather hazelnuts.

According to the testimony of our representative and other monks, this hieromonk came to the konaki at about the end of Mattins, just when they were singing the doxology.

He looked in on the church from the door, but didn’t enter. Instead he stood there at the prayer-stalls outside the chapel, lost in deep contemplation, as if in ecstasy at what he was seeing mystically.

Our representative saw him and didn’t know what was going on, so after a while he said: ‘Come on in, Father and do the ‘time’. [The ‘time’ is a short service celebrated by priests before they enter to serve at the Divine Liturgy].

The hieromonk answered: ‘What do you mean, elder? You’ve already got a priest serving in the altar. What’s the point of me going in’.

Our representative wondered at this in surprise: ‘There’s a liturgy going on with another priest?’

‘Of course. The deacon’s just been out to cense everyone and the icons and now he’s gone back into the altar. Is he serving by himself, without a priest?’

When they heard this, our representative, Elder Dometios, and the rest of the monks, as well as some others from neighboring kellia all realized that Fr. Nikostratos had had a divine vision of the Archdeacon Saint Stephen, to whom the chapel is dedicated.

They begged him to enter the sanctuary and celebrate together with the deacon, who, of course, they couldn’t see, but he wouldn’t agree. In the end, by various means of persuasion, they managed to get him to go in and celebrate the Divine Liturgy, as normal.

When he recovered and had regained his full capacities, he realized that what he’d seen had been a visitation and appearance of the Protomartyr Archdeacon Stephen. After the liturgy was over and those present were enjoying refreshments in the guest-quarters, Fr. Nikostratos, of his own accord, confessed and said to the assembled monks:

‘Fathers, you should know that you have a great gift in your church. Saint Stephen loves you very much. It’s no small thing for him to come and cense you’.

Fr. Lazaros ends his narrative by saying: ‘We note this down to preserve the memory and knowledge for later generations on 22 July 1958’.