Let’s envy the one

It used to be said that nobody is as ungrateful as a person you’ve done a good turn to and that nobody’s a firmer enemy. This was meant as censure on the passion of ingratitude and to emphasize the tendency on the part of recipients, sometimes to cut off all contact with their benefactors, so as to avoid the necessity of thanking them and expressing their gratitude. On occasion, this extends to becoming enemies because of being placed at a disadvantage.

This is the case in the reading about the ten lepers (Luke 17, 12-19). After they were healed by the Lord, only one remembered to return and thank him. The other nine didn’t feel the need to do so. 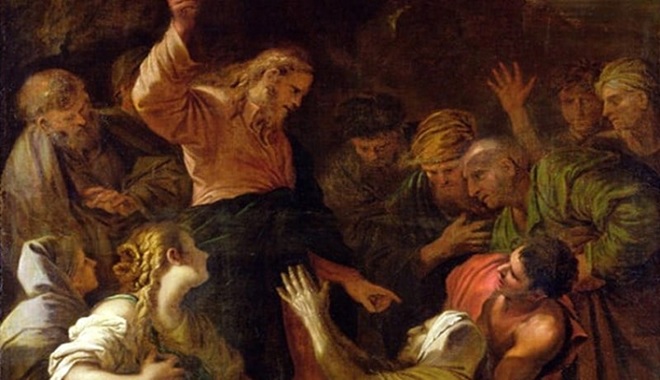 Let’s look at the reading from the beginning. The Lord was walking towards Jerusalem, the location of his suffering, and going ‘through Samaria and Galilee’ he encountered ten lepers in a small town. Because of their disease, they kept their distance from him, but called: ‘Jesus, Master*, have pity on us’. It’s interesting that they address him by name. When the Lord saw them, he took pity on them, because, with his ability to see into hearts, he understood their suffering. He needed no further proof, nor did he require faith on their part as condition for healing them, as he did on other occasions. In accordance with the law, he sent them off to priests to have their cure confirmed.

The Lord did all this on the basis of a plan. Naturally it was no coincidence that he was passing through that small town; nor that he chose to heal the lepers without setting conditions; nor did he chose to follow the law without reason. He reached down to the human race, became like us and was subject to the law until death, all in order to save us. Of course, all this was done not in order to garner thanks, nor in order to be recognized as the Savior, but out of perfect obedience to the will of the Father and perfect love for his creation.

Let’s go back to the reading. ‘As they went their way, they were cleansed’. The 10 lepers were, indeed, cleansed completely of the external signs of the disease which tormented them, but not all of their souls were healed of their inner leprosy. This is why nine out of the ten lepers didn’t return ‘to give thanks to the Lord. Only one of the ten did so.

‘Where are the nine?’, the Lord very reasonably asks. Did he not help them, too? Didn’t they feel any need to express their gratitude for such an unexpected miracle? Really, what sort of invalid who was cured after a long illness wouldn’t want to thank their physician straight away? If you were extremely sick and were then healed, wouldn’t you quickly tell the person who made you well, so that they could also be happy? Wouldn’t anyone unexpectedly cured shower gifts on their benefactor and wouldn’t they want to share their joy at being released from their troublesome sickness?

‘Where are the nine?’. ‘Only one of them returned and he was a foreigner, a Samaritan… and he fell on his face at the feet of the Lord, thanking him’. The Lord confirmed the complete healing of only one of the ten. The stranger, the odd man out in the group of ten, was saved, as the Lord said: ‘Stand up and go on your way; your faith has saved you’. The others, Christ’s compatriots, his ‘own people’, looked down on him and didn’t accept him as their universal redeemer and savior. Only one of those who sought healing of the body from him received overall healing, resurrection and salvation as a gift, thanks to his faith and gratitude.

So to which category do we, the believers of today, belong? To the many, perhaps, the nine Jews who sought only to be healed externally, and were satisfied when this had happened? They thought they’d had a right to be cured and then couldn’t remember to thank their physician.

Let’s not envy this group of the many, but ungrateful, who for the sake of the transient and impermanent- health- neglected the permanent and enduring- salvation. Let’s rather pursue the virtue of the one, the ‘foreigner’, who recognized that his healing had been granted as a gift from on high, which is why he felt such boundless gratitude for the Giver.

To him, the great Benefactor of our souls and bodies, we owe gratitude for the salvation he’s brought us, unworthy though we are. In exchange, let us send up to him a hymn of thanks, now and forever, and ‘to the age of ages’. Amen.

* The word Saint Luke uses is ‘epistatis’, literally an overseer but seemingly used commonly as an informal kind of address to someone you don’t know personally. Roughly the equivalent of calling somebody ‘Boss’. It was used, for example, by Saint Peter to Christ when he didn’t recognize the Lord at the miraculous draught of fishes. On this occasion, since there were ten in the group, it may well be that some, who recognized the Lord, called him by name, while others addressed him more informally. This would imply, of course, that they weren’t requesting a miraculous cure, but merely some sort of general assistance. Which makes their lack of gratitude at their unexpected good fortune all the more astonishing [WJL].