The Iambic Katavasies of the Lord’s Feast of Theophany [1]

Israel passed through the storm-tossed deep of the sea

Which God had made again dry-land.

But the black waters completely covered

The commanders of the Egyptians in a watery grave

Through the mighty strength of the right hand of the Master

The occasion of the crossing of the Red Sea by the people of Israel is well known and is the subject of the first ode of every katavasia. It’s always rendered in a different way and is usually adapted to the meaning of the feast to which the canon’s dedicated. 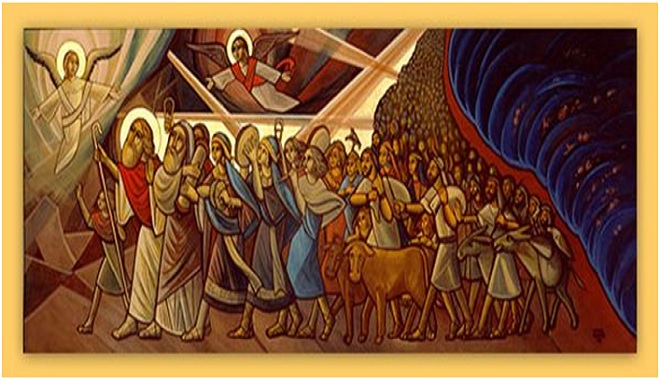 Here, though, the first ode seems not to be adapted to the meaning of the feast of Theophany and is rendered in a different, perhaps unique, manner. Let’s look at some of these features:

We have been freed from the ancient snares,

The jaws of the devouring lions have been broken.

Let us, then, rejoice greatly and open wide our mouths

Weaving from words a melody to the Word

Who delights in bestowing gifts upon us.

The psalmist urges us to rejoice and to open wide our mouth in order to praise God. In the [prototype] ode 3, the Prophetess Anna says: ‘My mouth has enlarged over my enemies’ (1 Kings [i.e. 1 Sam.] 2, 1), so let us open wide our mouth to hymn God our benefactor ‘Open your mouth wide and I will fill it’ writes David (Ps. 80, 11).

One might ask: why should we express thanks and how should we do so? First, why? Because we’ve been freed from the old snares. What are these? The sin of our first ancestors, from which we’re released through baptism, the sacrament inaugurated now by Christ through his own baptism. The poet very aptly refers to the jaws of bloodthirsty lions, who are none other than ravening demons, the heads of whom the Lord destroyed in the water of the River Jordan. As David had said: ‘The Lord has crushed the molars of the lions’ (Ps. 57, 7). [The word used in Greek, to translate the original Hebrew, means ‘mill-stone’ or ‘molar’, presumably because of the notion of ‘grinding one’s teeth’!].