The feast on the Second Sunday of Lent, of Saint Gregory Palamas who lived at a crucial time in history (1296-1359), allows us to realize that his teaching is actually rather topical, since there are a good number of similarities with our own age. Naturally, his teaching isn’t his own invention, since he was expressing the doctrine of the Orthodox Church in those troubled times. In Saint Gregory’s day, three dreadful enemies made their appearance, all of whom had their eyes on the lands of the Roman (“Byzantine”) Empire as well as wanting to alter its cultural life.

The first danger came from the Scholasticism of the West, which was indissolubly linked  with moralism, as this was expressed by the philosopher Barlaam. Some people have tried to present Barlaam as a Father of the Church with Hellenistic tendencies, or even as a champion of nominalism, as expressed by William of Ockham. As Fr. John Romanides has proved, Barlaam was a Platonist philosopher and was at odds with the Orthodox tradition. Indeed, his theology was idealistic and dualistic, since he separated the soul from the body, paid scant regard to the latter and operated within the context of Classical Metaphysics.

The second danger came from the Ottomans. At the end of the 13th century, a horde of Seljuk Turks [a clan of the Oghuz or] Ghuzz acquired a certain Osman as their leader. He became the founder of the Ottoman dynasty, to which he gave his name, and began to conquer provinces of Asia Minor. At the time of Saint Gregory Palamas, in 1354 to be precise, the Ottomans entered Thrace for the first time, capturing Kallipolis. He himself was taken prisoner and remained  so for about a year. During the time of his captivity, he held a dialogue both with Ismail, Orhan’s grandson, in Proussa, as well as with the Chiones [Muslims with a Jewish background]. He also held a dialogue with one Tasiman, who was responsible for the burial of the dead. These dialogues are of considerable interest.

The third danger was from the Slavs, and in particular from Stefan Dušan, who had conquered the whole of Macedonia apart from Thessaloniki, as well as Epirus, Thessaly and a part of Southern Greece. Indeed, at Easter, 1346, he called a Synod in Skopje, his capital, which elected a Patriarch of the Serbs and declared Stefan to be Emperor of the Serbs and Romans [i.e. “Byzantines”]. Of course, to be accurate, Dušan actually wanted to usurp the throne of Constantinople, so that he would be the successor to the Roman emperors. In essence, this was a revolt within the confines of the Roman Empire.

The existence of these three factors was accompanied by parallel cultural and religious undercurrents. In the main, life was dominated by a moralism that was foreign to the existential problems that people were facing, as well as by a desire for the good life, and also by Eastern mysticism. Add to this the revitalization of the heresy of the Massalians, who were linked to the Bogomils and whom Saint Gregory encountered on Mount Papikio, and the magnitude of the problems of that time can be readily understood.

Saint Gregory mustered a robust theology to meet these problems. He spoke of the union between created and uncreated, he rejected metaphysics, underlined serious human issues, such as the relationship between the soul and body and the distinction between the nous (the faculty of direct comprehension) and reason, the link between the sacraments and the ascetic struggle. He avoided agnosticism and pantheism and replaced the desire for the pleasures of life with Orthodox asceticism. Apart from that, as a traditional Romios [“Byzantine”], he refused to collaborate with the enemies of the state of New Rome and presented all the real essence of the Orthodox Tradition. So he contributed to the protective wall surrounding the Greek people, and also to the flowering which occurred in the 14th century. The famous Byzantologist, Sir Stephen Runciman noted that it was true that the days of the Palaiologan dynasty, when Byzantium was slowly but surely dying, coincided with the most brilliant period of Byzantine education.

Add to this the fact that Saint Gregory’s disciples and other hesychasts took the dynamism of their tradition to the Slavs and it becomes easier to evaluate his contribution, which we cannot scathingly and denigratingly call “navel-gazing”. That is mere ignorance which reveals a great deal.

The teaching of Saint Gregory Palamas is topical and needs to be studied further. In the West, people are setting up groups of academics, organizing conferences and creating schools in order to denigrate and belittle his teaching and his personality. I suggest we do the same, but with the aim of promoting his greatly inspired work. 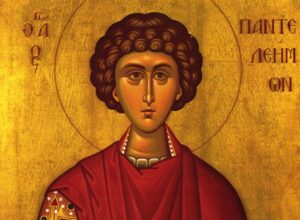 Saint Panteleimon, healer of the soul 27 July 2022 In the dismissal hymn for the great martyr Saint Panteleimon, whose memory we keep today, we ask the saint to pray to the Lord for the remission of our sins. You’d expect that, from such a great physician as Saint Panteleimon, we’d ask for the healing of our bodily ailments, but instead the Church asks for the cure of our spiritual sicknesses, the ... 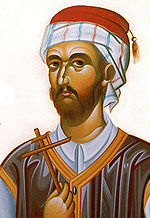 The Holy New Martyr Christodoulos from Kassandra – 27 July 27 July 2022 The new martyr and servant of Christ Christodoulos was from Kassandra, the first leg of Halkidiki, from a village called Valta. When he was still young, he left his home and went to Thessaloniki and, when he’d learned how to make thick woollen cloth and capes, he plied his tried there and went on business to the surrounding area before returning to... 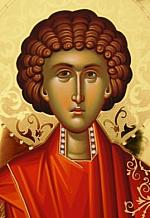 Saint Panteleimon, the Great Martyr 27 July 2022 St. Panteleimon, the Great Doctor and Martyr, was born at the end of the 3rd century AD. His father, Eustrogios, was not only very rich but was well known for his zeal in idol worship; whereas his mother St. Euboule was a faithful Orthodox Christian full of Holy Spirit, love and kindness. Her only interest was to guide her only begotten son in the ... 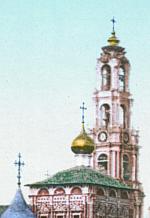 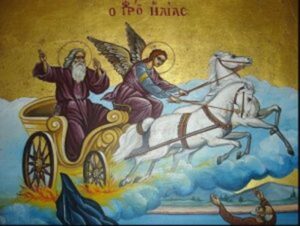 The glorious prophet Elijah 20 July 2022 The prophet Elijah is a model and example for all Christians, no matter what the conditions they’re living in. His faith and devotion to God, his resolute observance of God’s holy commandments and his spiritual zeal for those living ‘in the world’. And for the shepherds of the Church, given that he never wavered in his pursuit of the statutes of t...