Blessed David was from Northern Mesopotamia, which was a large monastic centre, being born in about 450 A. D. For reasons we don’t know, he came to Thessaloniki together with a monk called Adola. According to their biography, he initially entered the monastery of the Martyr Saints Theodora and Mercurius, which was known as the “Koukouliates”, the location of which was defined as being “in the northern part of the city, near the walls where the Aproïtes gate is”. The name “Koukouliates” denotes monks who wore a cowl, perhaps in a distinctive fashion, that is, cast over the shoulders, to judge by the surviving depictions of the saint. The location of the monastery should probably be sought to the north-east of the Acropolis, on the site known by the place-name “Garden of Provatas”. 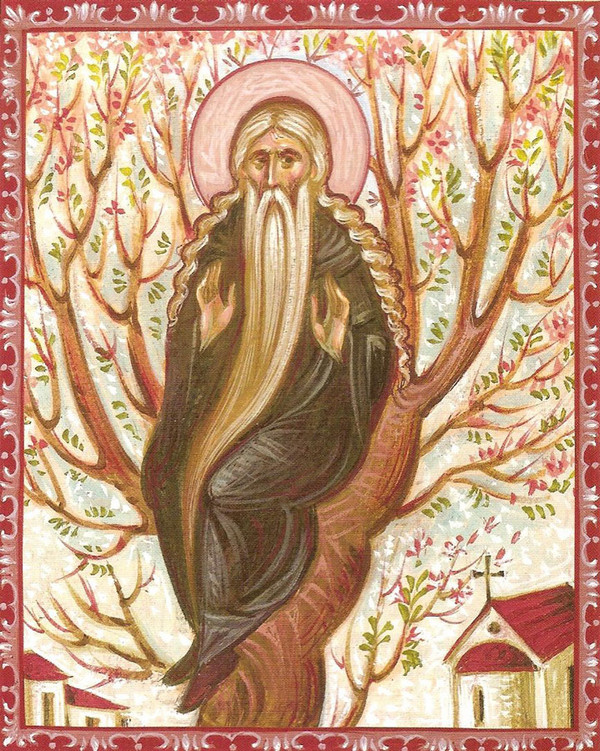 The examples of the saintly men of the Old Testament, especially that of the prophet and king David, who “for three years asked to be given goodness, knowledge and understanding”, impelled Blessed David to decide to live in an almond tree until the Lord revealed His will to him and granted him understanding and humility. At the end of three years, an angel of the Lord appeared to him and told him that his petition had been heard and that his ascetic practice as a tree-dweller was over. The angel told him to come down from the tree and to continue his ascetic life in a cell, praising and blessing the Lord. The saint imparted this vision to his disciples and requested their assistance in building a cell. The news quickly reached the ears of Dorotheos, the Archbishop of Thessaloniki, and the rest of the city.

With Neara 11, published  in 535, the emperor, Justinian, removed the northern provinces of Illyricum from the jurisdiction of the Archbishop of Thessaloniki and elevated his home region to an archbishopric under the title of Justiniana Nova. Archbishop Aristeidis of Thessaloniki  accepted the change, but attempted to salvage the political importance of the city by bringing back the seat of the governor of Illyricum from Justiniana Prima to Thessaloniki. Although the break-up of the ecclesiastical administration  did nothing to reduce the standing of Thessaloniki, the move of the provincial headquarters was a serious blow to its prestige. So, the demand of the population of the city, and the desire of the governor, Domnicus, was for the return of the headquarters to Thessaloniki, an idea which was enthusiastically espoused by Archbishop Aristeidis.

At this point, the assistance of Blessed David was sought, in the matter of bringing the request to the attention of Justinian, because the archbishop, according to the Life, could not “leave the city ungoverned” and it was therefore decided to send David to Constantinople. The choice of Blessed David indicates the gravity of the mission and also the difficulties expected in presenting such a request to Justinian, in view of the fact that he had just elevated Justiniana Nova and Justiniana Prima. After so many years of life as an enclosed solitary, the saint appeared once more in the light of day. His appearance had changed. His hair fell to his waist and his beard to his legs, while his face shone like the sun. Accompanied by two disciples, Theodoros and Dimitrios, he set sail for the capital.

His fame went before him, however, and so the whole city welcomed him. His reception by Theodora, the wife of Justinian, and the honours and respect heaped upon him, were a cause of wonderment of all those present. Theodora quickly went into action, so, when Justinian returned from official engagements she made sure to paint a favourable picture of the saint, with the result that Justinian invited him to appear before the senate. The saint presented himself in the senate in a spectacular way, holding a light and incense, which did not burn his flesh. The bearing of the saint and the obvious miracle made for a climate of awe and compunction and the emperor readily agreed to David’s request.

Bearing these good tidings, the saint set sail for Thessaloniki, though he was to see it only from afar, since, no sooner had the ship rounded the cape than he surrendered his spirit to God. This event took place some time between 535 and 541 A. D.

The news of the arrival of the holy relics of the saint under these circumstances shocked the whole city of Thessaloniki. The body of Blessed David was initially placed at the spot where the holy relics of the martyrs Theodoulos and Agathopodos had formerly rested, to the east of the harbour. With great sorrow, Archbishop Aristeidis declared a civic funeral. The saint’s relics were interred in his monastery, that of the Aproïtes, in accordance with his wishes.

One hundred and fifty years after the demise of the saint, in about 685-690, an attempt was made to open his tomb, when the abbot of the monastery of the Aproïtes, Dimitrios, “wanted, out of great faith, to take a part of this holy relic”. No sooner had the work started, however, than the slab covering the grave broke and this was considered to be a sign of the saint’s wish not to be disturbed. The holy relics remained in the same place until the time of the crusades. During the time of the Latin occupation, under the house of Montferrat (1204-1222), the holy relics were taken to Italy. In 1236 they were in Pavia, whence they were moved to Milan in 1967.

Finally, the holy relics of Blessed David were brought to Thessaloniki and placed in the basilica of Saint Dimitrios on 16 September, 1978.