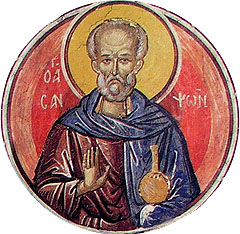 Our blessed father Sampson came from a family from the high society of Roman aristocracy, apparently linked to the kin of Constantine the Great. He studied all the important subjects of the time, particularly medicine, to which he felt drawn by his compassionate nature. He was unable to remain indifferent to the spectacle of pain and unhappiness and received the impecunious and the sick at his home, in order to provide them with all the attention that love could offer and, more particularly, the comfort of prayer and faith. When his parents died, he distributed his large fortune and, free of every earthly obligation and wishing to avoid being esteemed in the eyes of other people, he left for Constantinople. He settled in a humble house and devoted himself entirely to prayer, in silence, though continuing his good works. He gathered in as many sick people as he found and treated them without charge. He particularly took responsibility for those who were suffering from incurable diseases or those who had diseases that other doctors were reluctant to treat: lepers, the blind and the possessed and so his reputation spread throughout the whole city and his dwelling became a haven for those who had nothing to hope for. 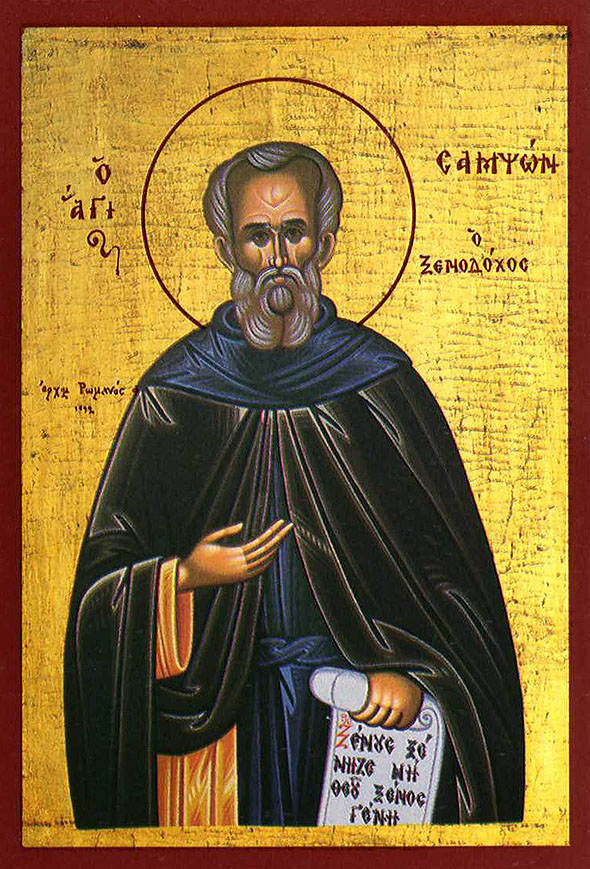 Shortly after he was ordained priest, at the age of thirty, by the patriarch Saint Minas (25 August) who greatly valued his God-pleasing efforts, he healed Emperor Justinian (527-565) of a serious illness. The emperor had lost all hope but was told in a dream to summon the saint to the palace. All Sampson needed to do was put his hand on the place where the emperor was suffering and the latter was cured at once. But because Sampson wanted to avoid any show of admiration, he put some ointment on, so that the miracle wouldn’t be attributed to him. The emperor didn’t know how to express his gratitude and wanted to see him laden with gold, but the saint sent back the gifts, saying: “Do you want to give me what I rejected for the love of God?”. Sampson advised the emperor  that he’d do better to spend his money on building a hospital next to Sampson’s humble abode, where he would be then able to receive patients and the poor in a fitting manner. Justinian agreed enthusiastically and commissioned his master builders, as soon as they finished the construction of Ayia Sophia, to proceed with the erection of an enormous and magnificent building a little to the north of the Great Church. This became known as “Sampson’s Hospice”. After this, the saint ran the hospice with consummate devotion, placing himself at the service of his suffering brothers and sisters with the zeal of an angel at God’s throne. This exemplary institution, which had many specialist doctors, was served by monks and was funded by the emperor so generously that the staff were paid and there was money left to provide food and clothing for strangers and the destitute.

After he had been engaged for many years in this ascetic activity, Blessed Sampson fell asleep in the Lord in peace at an advanced age. He was buried in the church of Saint Mocius, to which, on his feast-day, the doctors in Constantinople would in gather in procession, since they honoured him as their patron. In the hospice, his staff, stole and vestments were preserved as precious mementoes.

In later years, a host of miracles were performed and cures effected in the hospice through the silent mediation of the saint or after he made an appearance. Shortly after his demise, a terrible fire, which started from Ayia Sophia, destroyed the surrounding houses and reached the roof of the hospice. The people who worked there, together with local volunteers, were labouring in vain to quench the flames when they saw the saint treading on the roof and ordering the fire to recede. In this way, the institution was saved from destruction.

Sick people came to the saint’s grave to pass the night in prayer. They reverenced his icon and tended the oil-lamp that burned above the grave, and the saint, together with the Holy Unmercenary Doctors, Kosmas and Damian, often appeared to bring healing and treatment.