Encomium to the Most Holy Mother of God-1

Wishing to speak, wretch that I am, about the blinding radiance of the Mother of God, her dread and inconceivable powers, the mystery of the heavens and the world, the wonder, the mercy seat, and attempting to refer to the sublime vision and to the miracle in detail, moved to do so by the leaping of my heart, I was seized with great terror and fear. Because the recollection of the dread vision concerning the person of the Mother of God, having filled my soul with terror and brought fear to my heart, did not merely punish me a little, but tormented me greatly.  My memory of the very great vision castigates my mind because it does not have the power to speak, since I am dealing with an inconceivable mystery. Who is able to refer to such a mystery? 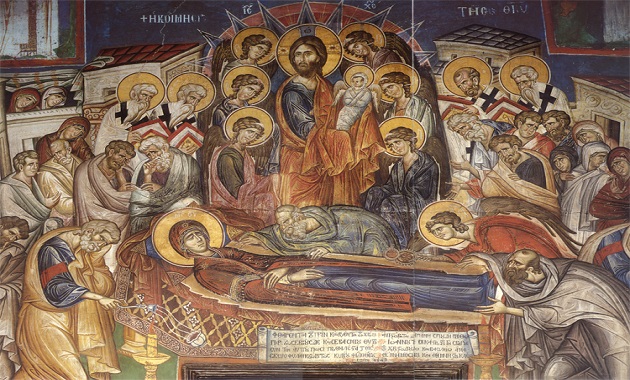 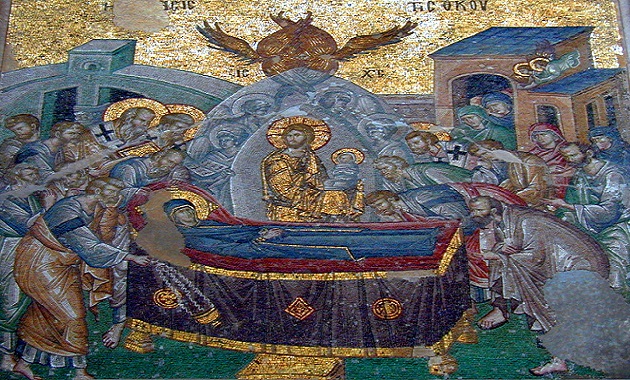 What mouth and what tongue will speak of it? It flounders and cannot utter speech. Now I shall try to refer to the Mother of God as far as I can. And I am greatly afraid, because I do not have the language to describe these very great and sublime things. Because, like Moses, I am not eloquent and am slow of speech, nor am I an orator to say words befitting the magnificent and blessed and virgin Mother of God, Mary, the Mother of the Lord, concerning whom it is difficult for human tongue to speak. It is weak and hesitant because it has no words appropriate for her. She astonished even the heavenly powers. The Angels, Archangels, Principalities, Thrones, Dominions, the Cherubim and Seraphim were all dumbfounded. All the ranks of Angels were filled with great fear and trembling.

They saw on earth, within her, Him Who is in the heavens, and were thrown into confusion. They saw the Virgin as heaven and as a throne, and were filled with fear, because they saw Him Who is without beginning, Who sits upon the cherubic throne, lying within the Virgin’s womb. O blessed root! Where did she spring from? Concerning her, the Prophet Isaiah cried in his ardent language: “There shall come forth a shoot from the stem of Jesse, and a branch from his roots shall bear fruit. And the spirit of the Lord shall rest upon him (Is. 11, 1-2). From this root, that is from the lineage of Jesse, came King David, and from his tribe came the holy Virgin, the blessed child of blessed progenitors.

Her parents, Joachim and Anna, who pleased God with the manner in which they lived their lives, brought into the world the Virgin Mary, the Temple and Mother of God. Joachim, Anna and Mary all served the Holy Trinity. Joachim means “preparation of the Lord” because from him the Virgin, the Temple of the Lord, was prepared. Anna means “grace” because Joachim and Anna received the grace to give birth to the holy Virgin after they had prayed. Joachim prayed on the mountain and Anna did so in her garden.

The blessed name of the chaste maiden Mary also means “Enlightened” because she was enlightened by the Son of God, and enlightened as many of those, everywhere on earth, who believed in the Trinity. Because the holy Mother of God, Mary, is the Bride of the Trinity, the treasure of the entire world; who cannot be described; whom Gabriel addressed by saying: “Hail, you who are full of grace, the Lord be with you”[1]. After Gabriel’s salutation, the Father sent the Holy Spirit from heaven as her betrothed. He joined the Virgin with his Only-Begotten Son, as a celestial bride, whom the Father loved, the Son dwelt in and the Holy Spirit desired.

Because she is both bride and bridal chamber and from her will come Christ the Bridegroom. She is the virginal raiment, according to the words of the Prophet David: “In the sun he has set his tabernacle; and he comes forth as a bridegroom out of his chamber” (Ps. 18, 5). O the desire for purity of the Bridegroom. He has His own handmaiden as Bride and Mother. Gabriel hastened and arranged the marriage of the Virgin, uniting the incense of the earth and the heavens, as the prophets had proclaimed and clearly set out the manner of the marriage. How is the Virgin, at one and the same time, the celestial Bride and Mother, who received the Holy Spirit as a gift before her wedding, and the heavens and paradise as her dowry?

The Virgin wished to become acquainted with Him Whom she desired and said: “Where is the Bridegroom Whose beauty I desire, which is brighter than the radiance of the sun and the glory of which is beyond description? Where is the eternal Light which I desire with great longing? Where is the Sun Who is seeking a sun-beam? Where is the harp of the cherubim? Where is Christ [the object of the] unsleeping gaze of the seraphim? Where is the worship of the angels, as manifested by Gabriel? Where is the unique and Only-Begotten Son of the  Father, Whom I desired and loved and Whom, having sought Him, embraced?”.

What can I say? How can I sing the praises of her who has been so highly praised. Because after God she is superior to all else. She is more beautiful than the cherubim and seraphim and than all the angelic powers, so much so that no celestial, human or angelic tongue can hymn her. Because the very angels themselves did, indeed, offer her hymns, praise, honour and glory, but were unable to do so as she warranted. The angels rejoiced when God alone was superior to them, but the holy Virgin became superior to them because she gave birth on earth to the God of heaven, and, in doing so, attracted the ranks of the angels to the earth. Because she became the means by which the earth was joined to the heavens.

O blessed Virgin, pure dove, celestial Bride, Mary, who are the Heavens, the Temple and the Throne of the Divinity; you have Christ Who is the bright Sun in the heavens and on earth; you are the cloud of light who brought Christ into the world, as blinding lightning. You are the celestial cloud, who concealed within yourself the thunder of the Holy Spirit and brought it down to earth. You brought the torrential rain of the Holy Spirit to the whole world, so that faith could bear fruit. Hail, you who are full of grace, the gate of the heavens, about whom the Prophet said: “This gate shall be shut, it shall not be opened, and no one shall pass through it, for the Lord God of Israel will enter by it” (Ez. 44, 2).

[1] This is sometimes translated, wrongly, as “The Lord is with you”. It is a greeting and therefore expressed in the optative/subjunctive mood. Similar wishes are “The Lord be praised” and “Glory be to the Lord”. This is not merely a linguistic quibble. At the Annunciation, Gabriel first says “The Lord be with you” and only after that does the Holy Spirit descend and actually is with the Mother of God.