Encomium to the Most Holy Mother of God-2

In the Song of Songs, again referring to this gate, the prophet says quite clearly: “My sister spouse is an enclosed garden; a garden enclosed and a fountain sealed” (4, 12). The holy and blessed lady, Mary, remained a virgin, the cloud of light, who held God the Word within her and to whom the Prophet Isaiah proclaimed in a voice of thunder: “Behold, the Lord sits on a swift cloud and shall come to Egypt” (19, 1). You are the unhewn mountain, from whom was cut the Rock, that is Christ, concerning Whom the most wise Daniel remarks: “A stone was cut out of a mountain without hands” (Dan. 2, 45), meaning that, without the intervention of a man, the Virgin gave birth to Christ Who is the firm Rock. You are the temple that has the celestial rock, Christ, the thunderous cloud, who, in your womb held lightning. 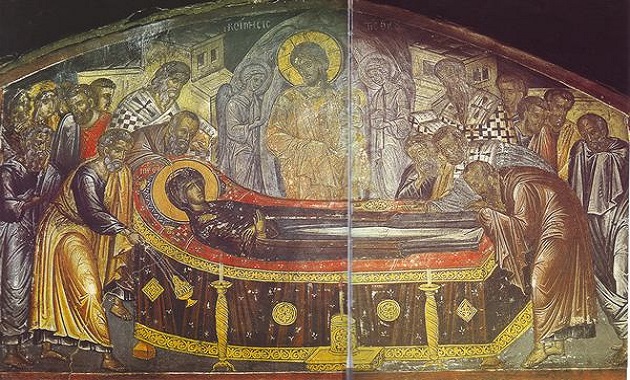 Holy Scripture concurs with this when it says: “Your stomach is a mound of wheat set about with lilies” (Song of Songs, 7, 3). You are the unsown field who received the word as a seed of wheat and yielded a whole sheaf. You are the spiritual furnace, who have within you the fire and the bread of life, that is, Christ. You are the blessed Mother of the Saviour, who gave birth to the incarnate Word of the Father, concerning whom Isaiah said: “Behold, a virgin shall conceive in the womb and shall bring forth a son and you shall call him Emmanuel” (7, 14).

O holy Virgin, Mother of the Lord! Blessed Bride, who are inseparable from the Trinity. You are more blessed than all other women, because you suckled Him Who sustains the universe. You are the blessed Mother of God, Holy Virgin, who now have borne Him Who once created Adam in paradise.

What can I say? How can I praise her who has been so greatly glorified? Through the prophet, God says of this blessed and ever-virgin lady: “Out of you, one shall come forth to me to be a ruler of Israel. And his dealings were from the beginning, from eternity. Therefore he will give them until the time of her who is in labour. She will give birth and the remainder of the brethren will return to the sons of Israel. And the Lord will stand and see and shepherd his flock in power” (Mic. 5, 2-3). O holy Virgin, who are the mother of the eternal Light. Of the Light Who illumined the ranks of the angels in the heavens, of the Light Who illumined the indescribable gaze of the seraphim.

Hail, Most Holy Virgin, who as the spiritual bush, holds the fire of the Godhead but does not burn. You are she who brought into the world the bread of life, about which Christ, the Saviour of the world, says: “Take. Eat. This is my body which was broken for you for the remission of sins”. Beloved, the virginal table is rich, full of virtues, which she has given to the world for our enjoyment. This is the blessed Virgin and Mother of Christ, who held the bright candlestick, which shines on the heavens and on earth. About her, the prophet Zachariah said: “Behold, a candlestick, all gold, and its bowl above it” (Zach. 4, 2). And about her, David also sang the melodic hymn: “Your law is a lamp to my feet and a light to my paths” (Ps. 118, 105).

You are blessed among women, because you gave birth to the incarnate Word, the Son of the Father, the pre-eternal God, without beginning or end, Who is worshipped together with the Father and the Holy Spirit. The Word Who sits upon the same throne as the Father and the Holy Spirit and Who is glorified by the angels, the dominions and principalities, whom He created. The Word Who spread out the heavens and established the earth. The Word, the true God, Jesus Christ, our Lord, whom you bore, Most Holy Virgin and after doing so remained a virgin. You gave birth to the Pearl, and wove the royal garland, blessed Virgin, who bore the celestial glory and filled the world with the fragrance of the multitude of flowers of paradise. The Virgin is the pure lily who bore Christ; she is the rose which does not fade, the vine of truth, laden with fruit and untouched in her virginity, and who, even though uncultivated, is yet heavy with grapes, produced by the mature Vine, that is Christ.

Tell us convincingly how you gave birth, Most Holy Virgin. How did you become the Mother of God on earth when you had accepted the pre-eternal God?

“I, the virgin, who bore Him in my womb, remained incorrupt, and I became the pure Temple of the Word of God, Who dwelt within me though I had no experience of marriage. I bore Emmanuel in my incorrupt and spotless womb, as it were on the throne of the cherubim, and there the Word of the Father took flesh. By divine dispensation, He Who was both without beginning and unseeable became visible, the incarnate God. Though I had no knowledge of a man, I gave birth to the pre-eternal God, Jesus Christ. And now, after birth, I am still a virgin and more pure than before. I gave birth without the pains that every other woman experiences, because what happened to me was not the same. People did not understand my pregnancy; only God, Who dwelt within me, did”.

O Virgin, precious treasure of the Church, which calls you both priest and altar, who have upon you, as a table, the celestial Bread of Christ, Whom you offer to us for remission of sins. O pure womb, who accommodated within you God Who is beyond accommodation. O womb, broader than the heavens, who did not restrict God, Who was within you. O womb, boundless as heaven and greater than it. O womb, more sublime and broad than seven heavens. O womb, who are the eighth heaven, more sublime than the whole of the heavenly firmament.  O womb, who have the eternal light of the whole of grace.