Encomium to the Most Holy Mother of God-3

What else can I say about the blessed and holy Virgin? Aspiration urges me to speak of the Mother of God, but fear makes me keep silence, because I have nothing worthy to say of her. My mind challenges me and my fear repulses me; one attracts, the other fends off. Since I am pressed by both, it is better that I speak of the magnificent and blessed Virgin. I call her Heaven, Throne and Cross: because she held out her crossed arms and held the Lord and Master, like the cherubic throne in heaven. Gazing into the heavens through holy scripture, I see the angels bowing down before her. 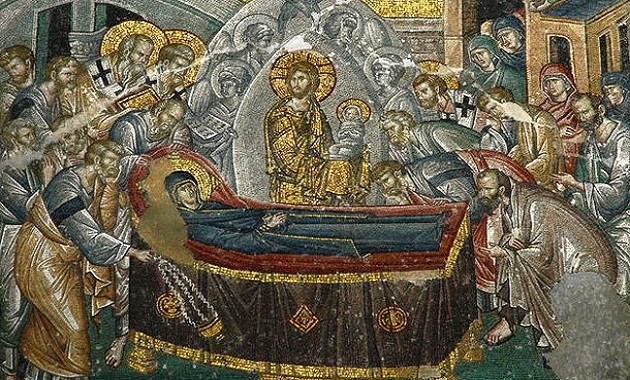 First, Gabriel greets the Virgin, saying: “Hail, you who are full of grace, the Lord be with you”. Hail, you who are full of grace, who hold Christ the sun, Who shines from the heavens with His bright rays. The Virgin has become a seraph, with many names and many eyes, which have seen a sight beyond our conception. Like a spiritual canopy she spreads her body  over the whole world, surpassing the cherubim. They turn away their faces, unable to look at the spiritual fire of the Divinity, but she fixes her wide-open eyes on the ineffable and unsleeping gaze of Christ, Whom she welcomed with desire and love. The ranks of angels bow down before the Saviour, but are unable to look at or touch Him; the Mother of God, however, welcomed the Inconceivable One, kissing Him. O Virgin, you bore the miracle of an incomprehensible mystery and you preached to the world the faith it so desperately desired.

The Virgin became higher than the angels, more sublime than the Cherubim and Seraphim, pleasing to Christ the King, as a worthy handmaiden and Mother who was honoured by God. Unblemished Holy Mother, who gave birth to Christ Who existed before you and Who said, “I existed before Abraham”. You glorified the cave and honoured the manger. Because the Virgin, the cave and the manger, like the heavens, held God Who cannot be contained; all three served the Holy Trinity.

When the Virgin gave birth, without pangs, in the cave, to the Lord of heaven and earth and laid Him in the manger, then the orders of the angels surrounded her and sang: “Glory to God in the highest and on earth peace, goodwill among people”. And the shepherds, watching their flocks by night, heard this doxology of the angels for the Saviour and went on foot to bow before the Light, gazing upon a strange wonder, the handmaiden of the Lord and earthly Virgin as the celestial Bride. Because she appeared in the cave as a Bride, and bridal chamber and Mother of God when she gave birth to Christ as an infant, in accordance with the prophetic voice of Isaiah: “For a child has been born to us, and a son given to us, and his authority is on his shoulder and his name shall be called the messenger of great counsel, wonderful, counsellor, mighty one, potentate, prince of peace, and father of the age to come” (Is. 9, 6).

After the shepherds, the magi, whose way from the East had been lit by a bright star which guided them, came and bowed down before Him Who had been born in Bethlehem. As soon as they arrived in Jerusalem, the star disappeared from their sight. Since they were worried because they had lost their guide, they were obliged to ask the inhabitants of the city to tell them where Christ had been born. All of them considered it a strange wonder. When Herod heard of this, he was greatly disturbed and, summoning the priests, he inquired of them where the Christ was to be born.

They had no qualms about answering him and confessed, without lying, since they could not hide the rays of the Sun, and explained the revelation of the Father which the prophet clarified, saying that the Christ would be born in Bethlehem: “And you, Bethlehem, house of Ephratha, are few in number to be reckoned among the thousands of Judah; out of you will come to me one who will be the ruler of Israel” (Mic. 5, 2). Woe to you, disobedient Israel! You received the law and rejected the Lawgiver. They explained where the Christ was to be born, but then denied Him when He actually came into the world.

So what happened to the magi? Their minds were in turmoil and their hearts filled with sorrow. Their sighs were like violent waves breaking over a ship, their eyes watered the ground with tears, they felt unbearable sadness, looking for the guide they had had when they set out from the East and which they now had lost. Where had that star which had been guiding them gone? In what manner was it hiding from them? Learn the truth and look at the wonder and its meaning. The reason why it was hidden from them was so that they should ask the unbelieving priests to manifest to all the mystery of heaven and earth.

Then, when everyone had learned this, the star appeared again to the magi, until it came and stood over the Infant in the cave, or, rather, in the heavens. Because where Christ is, there are the heavens and the cave became heaven on earth. When they saw the star, or rather the Saviour, they were overjoyed, bowed down and worshipped him and offered their gifts: gold, frankincense and myrrh. Gold for the King, frankincense for God and myrrh for a mortal. They wished to announce in advance the burial of Christ, the Creator and Maker of all, Who was born to the celestial Bride, Mary, the Heavens, Temple and Throne of the Godhead, the indescribable treasure of heaven. Of old, the angels blamed Eve, but now they glorify Mary, who elevated the weakness of the feminine nature, who restored Eve who had fallen into disobedience.