On August 16, the Orthodox Church celebrates the translation of the Holy Mandylion, an icon not made by hands, from Edessa to Constantinople, in 944.

King Abgar, (Armenian Աբգար Ե; Ancient Greek: Ἄβγαρος) BC 4 – AD 7 and AD 13–50) was a historical Syriac ruler of the kingdom of Osroene, the capital of which was Edessa. This is the region that was referred to as Armenian Mesopotamia by the Greeks, and as Ashur in the Old Testament. According to the legend, he wrote to Jesus, asking him to come and cure him of an illness, which may have been leprosy. The Church historian, Eusebius of Caesarea incorporates this letter into his work Ecclesiastical History claiming to have translated it from the Syriac (Aramaic). One of the texts of this letter runs as follows: “Abgar Ouchama to Jesus, the Good Physician Who has appeared in the country of Jerusalem, greeting:

“I have heard of you, and of your healing; that you do not use medicines or roots, but by your word open [the eyes] of the blind, make the lame walk, cleanse the lepers, make the deaf hear; how by your word you heal spirits and those who are tormented with lunatic demons, and how, again, you raise the dead to life. And, learning the wonders that you do, it was borne in upon me that: either you have come down from heaven, or else you are the Son of God, who bring all these things to pass. Therefore I am writing to you, and pray that you will come to me, who adore you, and heal all the ill that I suffer, according to the faith I have in you. I also learn that the Jews murmur against you, and persecute you, that they seek to crucify you, and to destroy you. I possess but one small city, but it is beautiful, and large enough for us two to live in peace”.

Abgar received a reply from Jesus, declining the invitation, but promising a future visit by one of his disciples. There is no mention of any image in this letter. Instead, the apostle Addai (Thaddaeus) is said to have come to Edessa, bearing the words of Jesus, by virtue of which the king was miraculously healed. 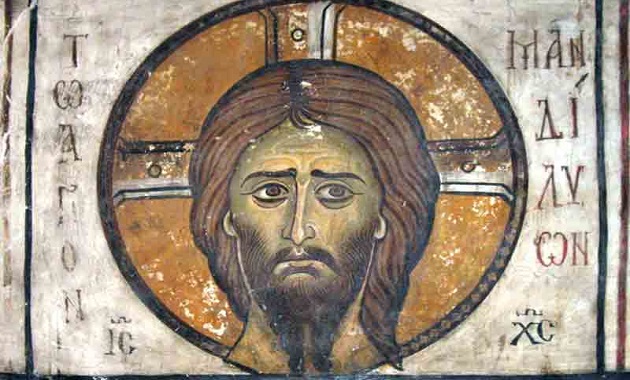 The first report of an image is in the Syriac text now known as the Doctrine of Addai, which reports that the person who delivered the letter to Jesus was one Ananias  (Hannan), who was also a court painter. In this text, the message was not delivered in the form of words but as an image painted by Hannan , which Abgar hung in one of his palaces. This took place in 32 A.D.

The next reference to a physical image is by Evagrios, Bishop of Edessa, who claims, in 593, that an image of Christ, which was of divine origin (θεότευκτος), was imprinted on a cloth and provided miraculous aid in the defence of the city against the Persians in 544.

Together with the letter, the image was taken to Constantinople in 944, first to the church of The Mother of God at Vlachernai, on August 15, then to the chapel of The Mother of God of Faros in the Great Palace. It is interesting that the first Byzantine copy is at the Monastery of Saint Katherine in Sinai and is dated ca. 945. The image disappeared from Constantinople in 1204, when the leaders of the 4th Crusade looted the city. It may be that the French “king” of Constantinople, Baldwin II, sold the image, or part of it, to Louis IX of France in 1241. It was housed in the Sainte Chapelle in Paris until it disappeared during the French Revolution.

These are the bare bones of the story and may not seem to offer much in the way of historical verification. It is, however, worth noting that a modern scholar, Robert Eisenman, in 1997, made the point that materials concerning this story “are very widespread in the Syriac sources with so many multiple developments and divergences that it is hard to believe they could all be based on Eusebius’ poor efforts”. It would therefore be unwise to dismiss the legend out of hand.

It should also be mentioned that such an image may account for the general similarity of all icons of Christ, just as icons of, say, Saint Paul are instantly recognizable. It may very well be that they are based on actual testimony as to the physical appearance of the persons depicted, or, in the case of Christ, to copies of a painting by Hannan which confirmed people’s recollections of the Lord.

The image is also important on another level, however. It is clear from this account that icons (“images”) were countenanced by the Church from very early on. It is true that some opposed them. Epifanios of Salamis (ca. 315-403), according to Ernst Kiztinger, “seems to have been the first cleric to have taken up the matter of Christian religious images as a major issue”. Opposition to icons is fundamentally an Old Testament attitude, the fear that people will worship images instead of God. John the Damascan, however, referring to the mandylion, says that Jesus: “is said to have taken a piece of cloth and pressed it to his face, impressing on it the image of his face, which it keeps to this day”. This is the New Testament view: that the physical presence of Christ could be recorded in some way which would serve as a visual reminder of Him. No one seriously suggests that we worship icons, even wonder-working ones. They are there primarily to help us direct our prayers to the person depicted. And in the case of the Holy Mandylion, we may very well have a rather accurate depiction of the way the Lord looked.