Their power is so great that they not only cleanse sins but even do away with death itself. Let me explain how.

And who, someone might claim, has become greater than death through charity? Don’t worry, my beloved. Learn, from looking at things as they actually are, that the power of charity has destroyed even the tyranny of death.

There was once a woman called Tabitha, which translates as Gazelle (Acts, 9, 36-43). It was her daily task to earn spiritual riches for herself through charitable works. She clothed the widows and gave them all her possessions. It happened, however, that she fell ill and died. 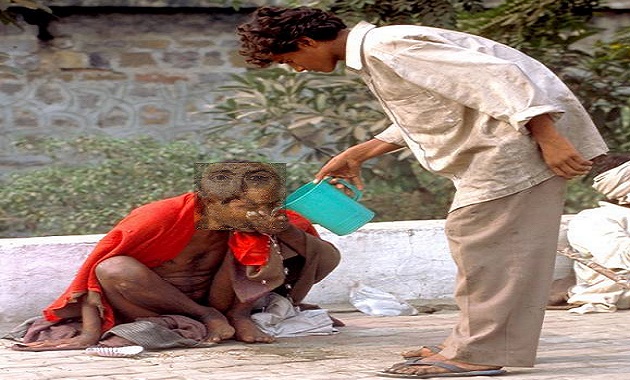 But see how these women who’d been helped by her were able to repay their benefactress at the right time. They went to Saint Peter, say the Scriptures, and showed him the clothes and other things Tabitha had made and done when she was with them. They missed their mother-figure, probably shed tears, and gave the apostle cause to feel sad on their behalf.

So what did the blessed Peter do? He “got down on his knees and prayed. Turning towards the dead woman, he said, ‘Tabitha, get up’. She opened her eyes, and, seeing Peter, sat up. He took her by the hand and helped her to her feet. Then he called for the believers, especially the widows, and presented her to them alive” (Acts  9, 40-1).

Do you see the power of the apostle, or rather of the Lord who acted through him? Do you see what a reward she received- even in this life- for her good works? Because tell me, what did she give to the widows that was as great a thing as they gave her? She gave them food and clothing, but they brought her back to life and helped her to be released from death. Or rather, not them, but our merciful Lord, because of the services she had rendered them.

Do you see the power of the medicament? Let us all prepare it for ourselves, because, even though it’s so powerful, it’s not at all expensive. In fact, it’s really cheap, so it doesn’t require any great outlay. Because the value of charitable works doesn’t depend on vast amounts of money, but on the open-handedness of the people who do the giving. This is why somebody who gives a glass of cold water is well-received: so that we’ll learn that the Lord of all asks good will from each of us. It often happens that a person will do a great act of charity, even though they haven’t actually got that much themselves. This happens when their good intentions are very firm. And, of course, the opposite occurs as well: a person may have a lot, yet, because they’re petty by nature, it appears that they have less than those who indeed have little.

So, from the good things that the Lord has given us, let’s give generously to those in need. And what He’s given us, let’s give back to Him, so that they’ll become ours again, very much multiplied. Because the noble pride of the Lord is so great that, even though He receives what He Himself has given, He doesn’t consider that He’s receiving His own things, but promises to repay us for them with even greater generosity. But only if we want to demonstrate our own [generosity]. In other words, to give to the poor as if we were putting our gift into the hand of God, bearing in mind that the hand that receives our gift will not merely return it, but will grant us a hundred times more, thus demonstrating His great kindness towards us.

And why does He multiply this gift?  Because, if we’re willing to give away something of what’s been given to us by the Lord Himself, and so long as we are willing to do that, then His hand not only returns the gift to us, but, along with it, He grants us the Kingdom of Heaven and acclaims us and crowns us and gives us innumerable good things.

So, is He asking something burdensome or difficult of us? Whatever’s uselessly and pointlessly shut away in chests and store-rooms, He wants us to  share out, as we should, we ourselves, so that from this He can find occasion to crown us with all due ceremony. Because He hastens and rushes and is careful to ensure that what He’s promised us does actually come about.

I would beg you, therefore that we should not deprive ourselves of such wonderfully good things… What we have pointlessly stored, we should share for the upkeep of the poor. In this, there’s no chance that we’ll ever miss the mark; neither need we fear failure, which is what happens here on earth. Because it says: “He scattered, he gave to the poor”. And listen to what follows: “And his righteousness endures unto the ages of ages” (Ps. 111, 3).

What a wonderful sharing! In a brief period of time He made the distribution and His love lasts forever. Is anything that might exist more felicitous than that?

This is why I beg you, let us earn the love of God through charitable works so that it might truly be said of us, too, that they scattered, they gave to the poor, their love will last for ever. Because He spoke, scattered, and gave so that you wouldn’t think that what had been scattered was lost. Because He adds immediately: “His righteousness lasts unto the ages of ages”. The righteousness of those who have shared, remains unblemished, it stretches out into eternity and never ends.

St. John Chrysostom, On the Nativity, 55.