Encomium on the Conception of John the Baptist (part 2)

This venerable elder and priest [Zachariah] not only believed in the Law, but taught it to others, as well. He still belonged among those who were awaiting the Messiah to comfort and save the people of Israel, and he prayed diligently for Him to come. He was, in fact a prefigurement and symbol of all those who relied on the Mosaic Law and would remain outside the faith in Christ. So, when he beheld the holy angel standing next to the altar and giving him this important message, why didn’t he accept what he was told with simple faith? Why didn’t he show the same faith as Abraham and Sarah had in similar circumstances? Even if he couldn’t manage that, he ought certainly to have accepted, with simple faith, the fact that, if God so willed He could perform any wondrous and supernatural act whatsoever. 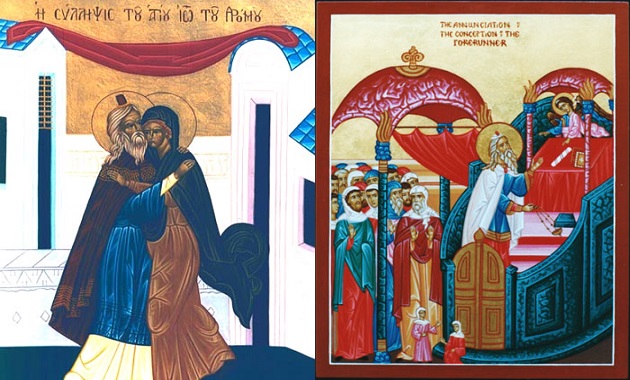 Because, of all that’s in the world, there’s nothing which, from some point of view, doesn’t owe its existence to the all-powerful will of God. Isn’t this what that wonderful person, Job, declared after he’d been taught by God, Who spoke to him and reassured him from a cloud? “I know that everything is possible for you and nothing is impossible” (Job, 42, 2).

And again, if Zachariah believed that the voice talking to him was hostile and opposed to God, there was no reason for him to seek reassurance and explanations and to say: “How can I believe this?” He knew very well that the devil [from Greek διάβολος = “slanderer”] is a liar by nature and doesn’t ever speak the truth. So since his first words would be deceitful and his appearance deceptive, he would have no trouble continuing with his lies thereafter.

In this way, he’d be able to fool and lead astray, into even greater lies and more dreadful deceptions, those he’d hoodwinked with his first lies. Not that Zachariah, who was to become the father of the great Baptist, was so naïve. Far from it. There’s no way that a witless father could have begotten such sweet fruit as John, who lived on honey in an effort to show people that they should choose the superior, spiritual way of life which is nourished and sweetened by God. I think, as I have said, that the venerable elder Zachariah went into a state of ecstasy, as did Isaac once, in order to prefigure the abolition of the Law with the coming of Christ and to demonstrate how difficult it would be for those who blindly persisted in the ordinances of the Law to accept Him. And also because he had to announce and manifest that the gentiles would welcome the thunderous voice of the Gospel which would be heard to the ends of the earth and bring the Grace of God to people.

So, deep in his soul, this great priest didn’t believe and, as a result, lost his voice, in order to show how illogical the disbelief of the Jews would be. And we can say that John, the Forerunner of God the Word, was begotten by Zachariah and was the heir to the virtues of his father. This is clear from the words which Christ Himself said later: “A good tree cannot bear evil fruit, nor can a rotten tree bear good fruit” (Matth. 7, 18). And I might add that, given his reluctance to believe, Zachariah was, in this respect, less virtuous than his wife, Elizabeth. Because she didn’t hear the words of the angel nor did Zachariah tell her, since he’d lost the power of speech before he returned home, but she realized the true condition of the Virgin Mary when she went to meet her.

No sooner had they embraced than she called her “Mother of God”, saying; “Blessed are you among women and blessed is the fruit of your womb. And what have I done that the mother of my Lord should come to me. For behold, when the sound of your greeting came to my ears, the baby in my womb leapt for joy” (Luke, 1, 42-44). And she went on to say: “Blessed is she that believed; for there shall be a fulfilment of the things which have been spoken to her from the Lord” (Luke, 1, 45).

So, by the Grace of the Holy Spirit, Elizabeth not only realized Who had impregnated the Virgin Mary, but she was also well-informed as regards what God had revealed and promised to her with His angel. That’s really something that we might consider unusual and hard to believe.

Zachariah was prepared by God and was, in God’s hand, a perfect and proper instrument. This is apparent not only from the fact that the same angel was sent to Zachariah as presented the mystery of the Annunciation to the Mother of God and had the privilege of telling him about the birth of John, who would be the Lord’s kinsman, but is also confirmed by the ode about Christ which Zachariah prophetically composed at the birth of John (Luke 1, 68-79).

And the spiritual stature of Zachariah is confirmed by the words he prophesied regarding his own son: “And you, son, will be called the prophet of the Most High. For you shall go before the face of the Lord to make ready his ways; to give knowledge of salvation to his people, in the remission of their sins” (Luke 1, 76-8). And he didn’t say this with his own powers, but rather because he was filled with the Holy Spirit. This is written in the Gospels which say of him: “And his father, Zachariah, was filled with the Holy Spirit and prophesied” (Luke, 1, 67). It’s obvious that Zachariah couldn’t have been filled with the Holy Spirit unless he was trustworthy and receptive towards Him. Nor would he have become the father of John if he hadn’t been worthy of the honour.

So all this, which preceded the conception of Saint John, demonstrates that he really was the greatest of men, even before he was conceived. Jesus Christ Himself, Who is the Very Truth, testified to John in such a way that no-one can claim that he’s lesser than any other man, because he wouldn’t have been born of such great and prominent parents. This is precisely what the Holy Gospel was pursuing, through what we said above, wishing to silence anyone who would doubt the uniqueness and greatness of John: “And they were both righteous before God, walking blameless in all the commandments and ordinances of the Lord” (Luke 1, 6).

What does this mean? This Gospel testimony regarding John’s parentage, Zachariah and Elizabeth, reveals that they lived at the pinnacle of virtue and that therefore they stood out from other people. Because the Gospel account, which is impartial and impersonal, does not merely call them righteous, but adds “before God”, which means that they made every effort to appear righteous to God, in accordance with the Gospel law. Because, with their prophetic gifts, we must assume that they had been granted a Gospel outlook, even before the Gospel. And because they were such people, they attempted, with their left hand, to conceal their God-pleasing way of life, that is, what they were doing with their right hand (Matth. 6, 3). And so, by their works and actions they applied the Gospel command. In this Gospel testimony to Zachariah and Elizabeth, it is abundantly clear that, in the best possible way, they observed all the commandments and teaching of Mosaic Law. And in doing so, they showed us that those who walk in accordance with the Law, either that of the Old testament or the New, are crowned with the rewards envisaged in the old legal code and are adorned with the highest virtues, which are granted by the Gospel estate.

Such were the people, then, who were the parents of John, who was to prove to be a link between the Old and New Testaments and a real bearer of all the supreme qualities revealed in both. And, of course, it’s recognized that the Old testament came to an end with John. This is why people say that prophets continued to prophesy until John the Baptist came. And also that John is held to be the beginning of the New Testament, since he was the Forerunner to Christ Who signed it with His blood. Indeed, John preceded all the Apostles, since he had been sent [απόστολος=emissary] to walk in front of Christ and to become the first fruit of all the saints who would proclaim the advent of the Kingdom of Heaven. Because he was the first to be told to preach the coming of the Kingdom of God, before Christ. And we might add that from the days of John  the Baptist, “the Kingdom of Heaven suffers violence and men of violence take it by force” (Matth. 11, 12), and that the first “man of violence” was John, who showed us by his example that we can all take it “by force” if we conform our lives to the truths of the Gospel.