Encomium on the Conception of John the Baptist (part 1)

Let us talk of the wonderful conception of the Honourable Forerunner- since it could stand as the beginning of the whole narrative- and put in order what we are triumphantly about to mention, insofar it pleases him whom we are praising today to give us the power of speech. But it mught be better to begin our talk with events that preceded the conception. In this way we can demonstrate that, even before his conception, it was clear that he would become a great and important person and that he would meet the expectations of people in matters of salvation, since he would not be exempt from the consequences which the fall of the Adam and Eve had for the whole of humankind. As a result of this fall, we had reached the point where we were living on earth in misery and degeneracy, as the general legatees of God’s decision: “You are dust and shall return to dust” (Gen. 3, 19). 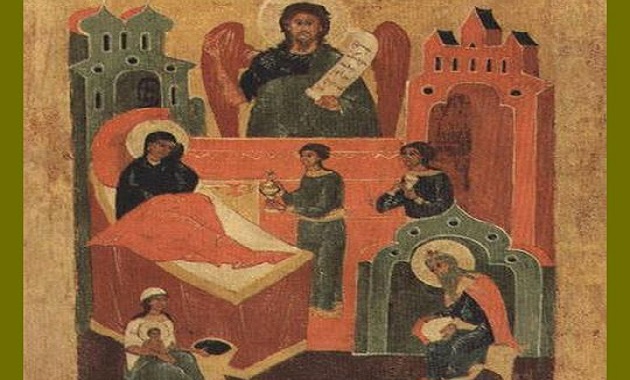 This was our natural destination, as the verdict on our disobedience. But this misery of people’s lives wasn’t the only thing. It was followed by apostasy from God. Because we forgot the Lord God, the creator of the universe and often worshipped other people who were as sunk in sin and wretchedness as the rest of us. Or, at other times, we had objects for gods, idols we’d made with our own hands. We then became involved in the passions of dishonour, since we offered the honour and worship which were proper only to God to inanimate idols and to the demons. We had fallen to such unprecedented depths of perversion that the  cure would have to be of the same order of power and magnitude.

And the sole cure for this condition was for God the Creator to resemble His creatures. In other words, for God to become a being like us, taking on a human body and a human soul. And so, as a real person, He took on all the capacities of human nature, as it is when it is free from sin. In other words he adopted all the blameless passions. In His person, divine and human nature were perfectly and actually united and through this unification it became possible to save humankind, which was and is held prisoner by the sinful passions. And so the opportunity was given to every person to be reborn in Christ and acquire the eternal bliss which God intended for us from the moment He created us…

God promised this bliss to people, prominent among whom was the elder and priest Zachariah, whose years had fled and, together with bodily decline, had brought him closer to death. He prayed to God often and diligently, that he would not be overtaken by death before he saw the Saviour of the world, Whom everyone was awaiting. This saintly old man always made this prayer to God begging him both to make the light of salvation shine soon and also to allow him personally to see the dawning of that light. And, so that death wouldn’t seize him before he participated in this vision, just at the moment when the fullness of time for it arrived,  he constantly repeated this prayer, but particularly when, as a priest he offered God his liturgical services, in accordance with the Law.

He did this every time it was his turn, as a priest, to enter the Holy of Holies to offer incense. This was where, once a year, the High Priest entered with his hands sprinkled with blood, denoting in this manner, the sacrifice of Christ our Saviour which would be the unique and real sacrifice, offered to His God and Father by Him Who was Himself High Priest and victim, a lamb sacrificed for the salvation of all humankind.

Zachariah, then, was in the Holy of Holies, both because he was worthy to be there and also by virtue of his sacerdotal office which permitted this. While he was at the altar, then, praying his diligent prayer, he received a visit from a heavenly angel. He saw the angel standing to the right of the altar where he was offering incense and he talked to Zachariah about the coming of the Word of God to earth, thus passing on to him the most celestial and joyful tidings.

The angel who brought this important message was the Archangel Gabriel. His name alone [=strong man of God] demonstrates the significance of the messages he brought. He’d come to the altar to announce wonderful events, which would occur before the incarnation of God, which Zachariah had so assiduously implored. The angel of God saw that Zachariah was greatly troubled at the sight of him and that the more frightened he became the more troubled he felt.

The Bible (Luke 1, 12) says “And Zachariah was troubled when he saw him and fear fell upon him”. Zachariah’s terror revealed that the time had come when the absolute power of the Law of the Old Testament had passed and that henceforth people would follow the path of the Gospel. So Gabriel dispelled Zachariah’s fears and then told him the good tidings. Because what he had to tell him did not cause fear but rather fearlessness and delight. What did he say to him? “Do not fear, for God has heard your prayer”. He didn’t just ask him “What are you afraid of, venerable old man, what are you afraid of  now you’ve got what you wanted?

What are you afraid of now that you’re free of the burden of worship of the Law? Why are you upset now that you see the light in the darkness. Why are you surprised now that you see those who were troubled becoming established in the Grace of God?” But he added: “These messages I bring you are beyond wonder, but they don’t inspire fear in those that hear them. I have great mysteries to reveal to you, but you must not be troubled, especially now that you’re about to hear them. On the contrary, you should be glad and delighted with me, because by their nature these things cause joy and gladness. Deliverance is at hand”.

“The time’s come for the fallen to arise. The law’s found its true purpose. The time of Divine Grace has dawned. And very soon you’ll see, before your own eyes, Him Who is the summation of everything I’ve told you. You’ll see the Word of God become incarnate through a Virgin, be born as all you human beings are and save the whole human race. And you’ll not only wonder at what you desire so ardently to see, but you’ll also be fortunate enough to play a part in the events. And, so that you’ll believe what I say- and I ask you to do so- I’ll reveal another wonderful thing, which is that what you’d lost all hope of ever achieving will become a reality What exactly?

Your wife, Elizabeth, will bear you a child and you’ll call him John. You yourself will feel joy and gladness, and many others will rejoice at his birth. He’ll prove to be great in the sight of the Lord; he won’t drink wine or alcoholic drinks; he’ll be full of the Holy Spirit even from the time he’s still in the womb; and through repentance he’ll bring back to God many of the children of Israel who have become estranged from Him. And he’ll go before Him with the spirit and power of the Prophet Elijah to turn the hearts of the fathers to their children and will bring back to the disobedient the outlook of the righteous. And he’ll prepare all those who are well disposed so that they’ll receive the Lord (Luke 1, 13-18).

So do you see how these are events, attested by the voices of angels, about which John could boast, because they occurred at his conception, or even before then? […]