Martyr Sophia and her 3 Daughters: Faith, Hope and Love

The holy martyr Sophia and her three daughters, Elpis (Faith), Pistis (Hope) and Agapi (Love) [Sophia, here is taken to be a woman’s name rather than “Wisdom”, as in the church of Holy Wisdom (Agia Sophia) in Constantinople; similarly, the third daughter is Love, in accordance with Saint Paul, who calls her Love (which was translated, correctly, into Latin as “caritas” and then, wrongly, into English as “charity”)], lived at the time of the Roman emperor Hadrian, (117-138) and belonged to fine, exalted stock. They inherited the Christian faith from their forebears and lived their lives in accordance with the will of God. 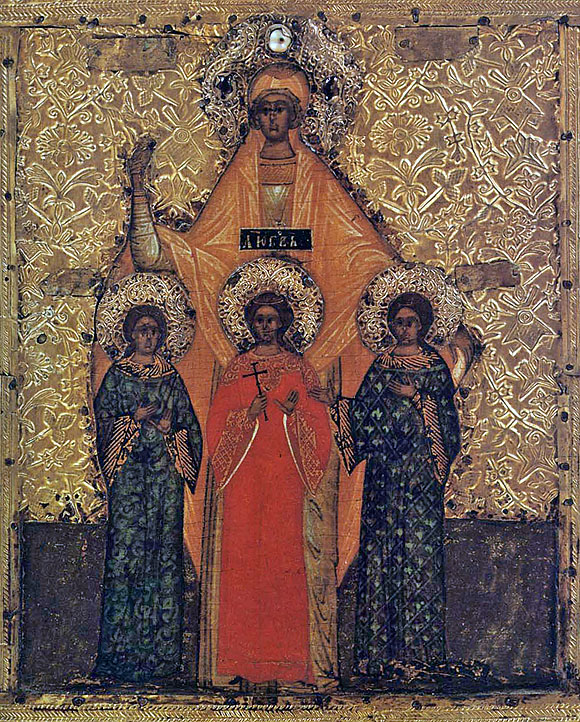 It happened that once, when these holy woman went to Rome, the fame of their family followed them there, as did the information about their faith in Christ. So the ruler [it is not clear from the text whether this was Hadrian himself or a more local high official] commanded that they be brought before him. When this had happened, he was struck by their beauty and comeliness and, once he had separated the mother from her three daughters, he discussed the faith with her, in an attempt, at times with blandishments and promises and at others with threats, to wean her away from her faith in Christ. Sophia, however, remained adamant in her faith, defended it, fended off the insults of the emperor and so these could not be realized.

When he’d been defeated by the mother, the emperor ordered that her three daughters be brought before him. When this had been done, he looked at them charmingly and with enticing flattery and promises attempted to exploit the fact that they were so young in order to find out whether, because of their tender years, they had accepted the teaching of scorning the material goods which were offered to them. The tyrant was defeated again because he realized that, despite their age, the young girls believed, with total awareness, in Christ.

After this, the ruler wished to examine each of them separately. First they brought n Faith, who was then twelve years old. After she had boldly confessed, she bravely criticised and rejected the tyrant’s machinations. He then ordered that she be subjected to terrible, unheard of tortures. First the executioners stripped her, and having tied her hands behind her back, beat her mercilessly with rods. Then they cut off her breasts with a knife, though, -what a miracle!- milk flowed from them instead of blood, which caused awe and astonishment among the impious and criminal executioners. Thereafter they laid her on a red-hot grill. The girl didn’t suffer anything at all and remained unburned by the fire, to the frustration of the tyrant and the glory of Christ. Then they smeared her with pitch and asphalt and again laid her on the red-hot grill. But she remained unharmed even after his torture and raised thanks to God.

The tyrant had now been well and truly shamed by the young great martyr. He literally became frenzied and ordered that she be decapitated by the sword. Immediately the executioners took her away to the place where her beheading was to take place. Her mother, Sophia, went before her and encouraged her to accept her death for Christ with joy. As soon as they reached the spot, the executioners decapitated her with swords. And so the great martyr Faith gained the crown of martyrdom from Christ and humbly elevated herself to sainthood, since she became an example of faith in Christ to the death.

When this had happened, impiously on the part of the tyrant and in a Godly manner on the part of the first young girl, the second daughter, Hope, who was ten years old, was brought before him.  But she, too, despite her young age, was unshakeable in her faith in Christ and categorically rejected the flattery and enticements of the tyrant. Utterly put to shame by a little girl, he ordered them to lash her with cowhides and then to throw her into a red-hot furnace. The orders of the tyrant were carried out, but the girl, with the power of God and the invisible presence of Christ, remained completely unharmed.

After this, the tyrant ordered that Hope be subjected to new tortures. They hung her up on a piece of wood and scoured her whole body with iron nails. Thereafter, drenched with her own blood as she was, they threw her into a boiling cauldron full of pitch and resin. But although Hope suffered not in the least from this hellish torture, the boiling liquids spilt out over the cauldron and dropped onto quite a few of the idolaters who were there and some of them died from the unexpected burns. This completely enraged the executioners and they immediately beheaded the tender Great Martyr. And so this ten-year-old angel of Christ, Hope, was murdered- but entered the heavenly kingdom of God wearing a crown.

After this the third and youngest of the sisters, Love, was brought before the insatiable tyrant. She was a mere nine years old, but with an unusually strong mind of her own for such a young girl, and so with indescribable boldness she declared that Christ is the only true God and with child-like glee derided the religion of the idols. This declaration astonished and goaded the tyrant to such a pitch that he ordered the executioners to hang her up and beat her. They did so brutally, with such heavy lashes that her limbs were ripped to bits and her joints were dislocated. But, by the grace of God, her health was immediately restored and, at first the tyrant was astonished and speechless. Later, however, overcome with furious rage, he ordered that she be cast into a furnace too, this one full of every type of combustible material. But Love was saved miraculously by the intervention of a protecting divine angel, whereas the flames, which had left her untouched, half-burned the tyrant and the other pagans who were there. The most brutish and inhumane tyrant then ordered the executioners to pierce her body right through with an iron pin. But she withstood this torture, too, and was unharmed. The tyrant then ordered her decapitation by the sword. And so this nine-year-old little angel, Love,  was murdered, but endowed by the Lord with  the everlasting garland of martyrdom, as her two sisters had been before her.

The Martyrdom of Saint Sophia and her 3 daughters, Byzantine illumination, 11th Century

Their mother, Sophia, rejoiced greatly that she had nurtured this trinity of her offspring, so blessed by God, and extended her praise and thanks to the Lord for her angelic little mites. She then buried, with all maternal honours, the precious relics of her much-beloved daughters. Afterwards she remained at the gravesides for three days, then begged God to take her from this fleeting life. And, indeed, God heard her prayer and called her overjoyed soul to Himself. Her precious relics were buried next to the graves of her three daughters, as an eternal testimony of the unified love of all four of them for Christ in the heavens, Who crowned them and to Whom belongs glory unto the ages of ages, Amen.

Note: Although we in the West are accustomed to accounts of martyrdoms such as those suffered by the three children-saints, the last paragraph, describing Saint Sophia’s sentiments is something with which were are perhaps not so comfortable today. We should remember, however, that not long ago, i.e. only twice the life-time of someone now in their 70s or 80s, the Victorians would have understood Saint Sophia very well and applauded both her feelings and the manner of her demise. Any of Charles Dickens’ novels will confirm this – Dombey and Son especially so. And, of course, somewhat earlier, in Hamlet, Horatio meets his friend’s death with the words: “Goodnight sweet prince and flights of angels sing thee to thy rest”. So it may be that our present attitude, influenced as it is by the materialistic society in which we live, is out of tune with that of earlier generations. (WJL)