Cremation versus the Orthodox Practice of Burial

The first time I ever attended a funeral service where cremation of the body of the deceased had taken place was in Portland, Oregon, many years ago. An Episcopal priest friend had died and had requested his body be cremated. Walking into the church and seeing a small box sitting before the altar was a shock for me. Cremation was always something only non-believers practiced, Christians having always viewed cremation as something of pagan roots. I clearly remember feeling cheated out of that last goodby, unable as I was to view my friend for one last time. 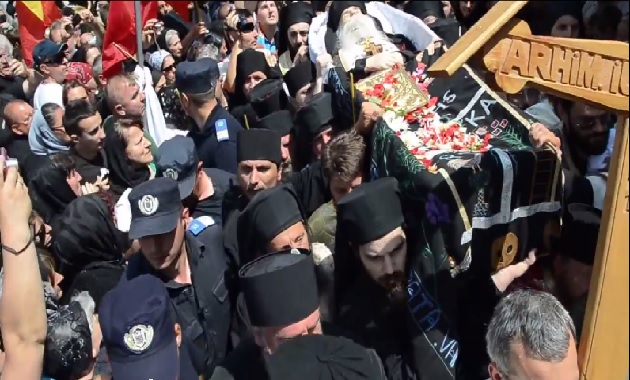 In ancient times pagans always either burned the bodies of their dead, or left them for birds to consume, whereas Jews and Christians placed their dead in tombs, or in the earth, awaiting the bodily resurrection. For Christians the belief that the body was the temple of the Holy Spirit and therefore sacred, made the burning of the body unacceptable. Bodies of our dead were always to be treated with great reverence. From the earliest of times the bodies of the martyrs and saints were buried in the catacombs, their tombs used as altars for the celebration of the Eucharistic offering, catacombs often being the only safe place for believers to worship without threat of arrest.

One of my earliest memories was going to a family plot in Spokane, WA. with my maternal grandmother. She would lay flowers on the graves of her loved ones, family members who were long dead before I was even born. Even though many had been gone from this life for a few generations, to my grandmother they were still alive. She would sit on a tombstone, flowers in hand, and tell me about her sisters, her parents, and other family members. Her shared memories were made all the more real seeing the names of these loved ones chiseled in stone. The ritual of visiting graves was common back in those days, with families keeping alive the memories, while showing their love and respect for their dead relatives by tending to the graves, and leaving flowers. It was even quite common, especially in Western Europe, for friends and families to take picnics to graveyards.

There is also the role cemeteries can play in our own spiritual lives, for they are clear reminders of our own mortality. I have already picked the plot where my own remains will be placed on the grounds of our monastery. Seeing where one will eventually be laid to rest is a good way to remember one’s own eventual death, reminding ourselves of our own mortality, and to use our remaining days wisely.

The Orthodox Church forbids the cremated remains of anyone to be brought into the temple for services, or for any other reason, and funeral services over cremated remains is strictly forbidden. The practice is seen as a denial of the bodily resurrection, not because God can’t raise the dead from ashes, but because the practice does not reflect the Church’s teaching that the body of a believer housed the Holy Spirit. It is also ignoring the fact that believers receive, in their lifetime, the very Body and Blood of Christ, and the body is therefore made holy in preparation for that day when we shall be united in both body and soul, to live forever with God.

My parents converted to Orthodoxy in their mid seventies and are buried in the church yard next to Saint John the Baptist Church in Post Falls, Idaho. Having them in an Orthodox cemetery, side by side, means a lot to me, and I visit their graves whenever I am in Northern Idaho on visits to my family. Having a plot to visit continues that connection and allows me a chance to show my love for them by placing flowers on their graves as I offering prayers for their souls. It saddens me that so many people have deprived themselves of such moments, having spread their loved one’s ashes over golf courses or on beaches. The loss of family cemeteries has contributed, I am convinced, to the breakdown of the all important extended families that were at one time so important to the cohesiveness of family values.

For those who would say that cremation is more ecologically sound, I would point out that the particles dispersed in the atmosphere are by no means good for the environment. A new way of burial, known as green burial, is gaining popularity throughout the country and is far more ecologically sound than cremation. Green burials require a simple pine coffin with no metal, nails or glue, using only wooden pegs and natural materials. The body is not embalmed (in keeping with Orthodox tradition), so nothing goes into the earth that is not natural. This is one of the most inexpensive ways of internment and is in keeping with the canons of the Orthodox Church. This is the way my own body will be laid to rest.

This article was posted on Friday December 23, 2011 on The Morning Offering, which can be found here:  http://morningoffering.blogspot.com/

This article is posted here with permission.