Feast of Saint Evdokimos at Vatopaidi

At noon on Tuesday 15 October, His Eminence Metropolitan Chrysostomos of Myra arrived at the Holy Monastery of Vatopaidi, having been invited by the Monastery to officiate at the Feast in honour of Saint Evdokimos.

In the morning of 16 October, His Eminence and the Abbot of the Monastery, Archimandrite Efraim, travelled to the capital of the Holy Mountain (Karyes) in order to take part in the celebrations of the anniversary of the incorporation of the Holy Mountain into the Republic of Greece, and also to pay their respects to Vartholomaios, the All-Holy Ecumenical Patriarch, who was the official guest. 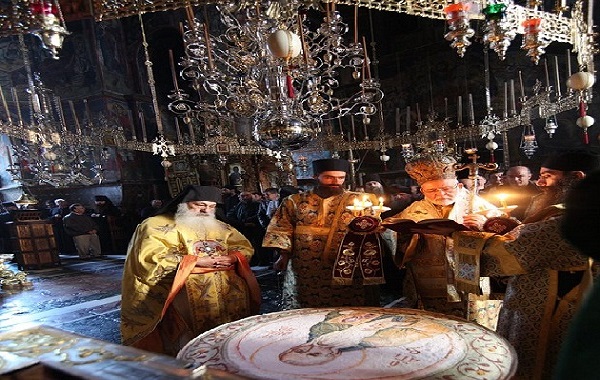 On Thursday, 17 October, at 4:30 in the afternoon, the feast of Saint Evdokimos started with Small Vespers. This was followed by the festal meal in the refectory and, at 7 in the evening, the vigil for the feast began.

After the Lity, everyone, monks and laity, went to the Main Common Room of the Monastery, where His Eminence first thanked Elder Efraim for his invitation to officiate at the feast and then went on to mention the activities and spiritual endeavours of the Metropolis of Myra. He also referred to the coming visit of the All-Holy Ecumenical Patriarch to Myra in Lycia for the feast of Saint Nicholas, on 6 December 2013.

Those assembled were then addressed by the Ukrainian Ambassador to Athens, His Excellency Vladimir Skourov, who expressed his thanks for the hospitality extended to him and his joy at participating in the feast of Saint Evdokimos. On Friday, the President of the Ukraine, Viktor Yanukovych, together with the ambassador, were to give to the Ecumenical Patriarch in Karyes an exact copy of the historic, 16th century Peresopnitsa Gospel, which was published on the occasion of the anniversary of the 1025 years from the date of the conversion of the Ukraine to Christianity.

After this, Elder Efraim spoke about the life of Saint Evdokimos and the great virtue of his humility since, even after his repose, he avoided human honour and glory. This humility of the saint should give food for thought to all of us who seek vain glory from other people, rather than real glory from God.

(Saint Evdokimos was actually an anonymous brother of the Monastery of Vatopaidi. His holy relics, which exuded an ineffable fragrance, were discovered in the course of repairs carried out at the old cemetery. The saint’s body was found in an attitude of prayer, with his arms crossed. He had an icon of the Mother of God on his chest, which indicates that he had foreseen his end and, out of humility, had arranged things so as to avoid being honoured. His fellow monks rightly called him Evdokimos (Well-Pleasing), because he lived in a pleasing manner and it pleased God that his holy relics should be found. The relics performed miracles and were transferred to the katholiko (main church) of the Monastery on 5 October 1840).

After this assembly in the Main Common Room, everyone returned to the church, where the service continued until two o’clock in the morning.

At six o’clock on Friday 18 October, the Festal High Divine Liturgy began, with His Eminence Chrysostomos of Myra officiating. Celebrating with him were the Abbots, Archimandrites Filotheos and Efraim, of the Holy Monasteries of Karakallou and Vatopaidi respectively; Hieromonk Grigorios, Elder of the kelli of Saint John the Theologian, which belongs to the Holy Monastery of Koutloumousiou; and a great many other priests and deacons.

The canonarch was Father Palladios from the Skete of Koutloumousiou, a figure well known to pilgrims to the Holy Mountain.

The service finished at 9:30 in the morning and thereafter everyone went into the refectory for the meal. At the end of the meal, Elder Efraim, the Abbot of the Monastery of Vatopaidi, and His Eminence Chrysostomos spoke, as did His Excellency Ambassador Skourov, who expressed his gratitude for the hospitality accorded to him and conveyed the cordial wishes of President Yanukovych to Elder Efraim and the fathers of the Monastery. Finally, Elder Filotheos, the Abbot of the Holy Monastery of Karakallou also spoke.

[For more photos, you may visit Pemptousia’s Photo Gallery on next days]