The Holy Martyrs Sergius and Bacchus

These bold and holy martyrs of the Christian faith were, at one time, officers at the impartial court, in the reign of Maximian. This impious emperor appreciated them particularly for their bravery, wisdom, and loyalty to his person. But when he was told that his two noble courtiers were Christians, his favour tuned to rage. On the occasion of some pagan feast, the emperor asked Sergius and Bacchus to offer the sacrifice to the idols together. They refused, publically, to obey him. Mad with fury, he ordered that they be stripped of their military uniforms, belts, rings and insignia and that that they be dressed in women’s clothes. Then they had iron rings passed around their necks and were paraded through the streets of Rome, to be mocked by the people. Then they were sent to the eparch in Asia, Antiochus, to be tortured.

But Antiochus had attained his office with the assistance of Saints Sergius and Bacchus, who had once introduced him to the emperor. He begged them to renounce Christ, in order to escape torture and an ignoble death. They answered: “Honour and dishonour, life and death, are all the same, fleeting and perishable, to anyone seeking the Kingdom of Heaven”. 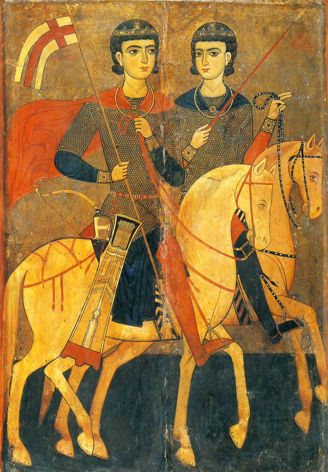 Antiochus cast Sergius into prison and ordered Bacchus to be tortured first. The torturers took turns to beat him mercilessly, until his body was separated into its constituent parts. Bacchus’ holy soul departed from his fragmented and bloodstained body and, in the hands of the angels, was borne to the Lord. Saint Bacchus was martyred in the city of Barbalissos in Syria.

Thereafter the executioners dragged out Saint Sergius and forced him to walk on iron pattens in which sharp nails had been embedded. In this way he walked as far as the town of Resafa in Syria, where they cut off his head. His soul, however, went to Paradise, where, together with his friend Bacchus, he received the crown of eternal glory from Christ, the King and Lord.

Both these outstanding athletes for the faith were martyred in about the year 303.

Hymn to the Holy Martyrs Sergius and Bacchus

Imperial officers, Sergius and Bacchus
served the King. Not the earthly one, however,
but Christ the Immortal King.
The earthly one mocked the saints
and removed their belts of honour from their waists.
But the Lord girded them with strength.
The emperor stripped them
of their royal cloaks,
but the Saviour clad them with greater beauty,
with the imperishable garment of immortality;
The emperor removed from their right hands
the signet rings.
but the Lord gave them another
incomparably more glorious,
the ring plighting their souls to Him.
The emperor exiled them from his court,
but God received them into the courts of heaven.
The earthly world tortured the soldiers of Christ;
the earth tortured them, but heaven gave them rest.
Earthly degeneration repulses purity,
evil repels goodness, but Saints Bacchus and Sergius
returned all the earthliness to the ground
and gave their holy souls to God.
Although exiled from the earthly kingdom,
they still to this day illumine the whole world;
through their martyrdom they defeated evil;
through their deaths, for the Cross, they were glorified.
Now as saints, victorious over the forces of darkness,
they show us the path to victory.